Prayers for Nikhilananda das from Germany 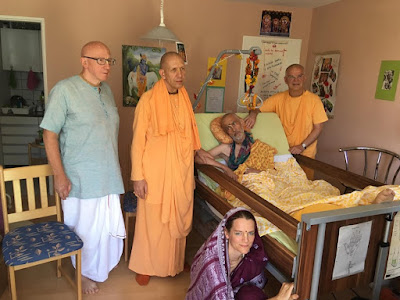 Prayers required for Nikhilananda Prabhu, a disciple of Srila Prabhupada from Germany, who is in a very serious health condition.

[PADA: Yes, its a serious situation for many of the "original disciples of Srila Prabhupada." They seem to be departing from their bodies left, right and center. Which is why we cannot understand how some people still say, "the original disciples should all become gurus, that will fix things." Really?

And its a little sad that so many of these "original devotees" are either leaving their bodies in a somewhat or maybe very isolated situation, with only a few associates in a hospital, or they are leaving in the company of various GBC friendly folks, which is not an ideal environment either. This is clearly not what Srila Prabhupada would have wanted for his children.

OK but lets be honest, making these people into gurus at this stage, that is just not going to work is it?

They won't be here much longer, but the vani of Srila Prabhupada? It will still be here. I believe we put our money on the right side of this issue by betting on the vani continuing, whereas the "living guru project" -- not so much.

Anyway, lets hope for the best for him. As one devotee commented, if he is suffering too much in this body, then its maybe better to move on to the next plane in any case. We shall see what Krishna arranges.

Updates will be made here when available. ys pd]