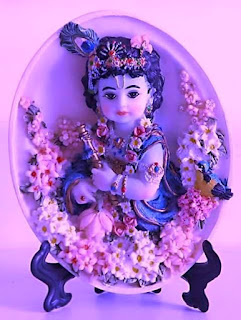 SB 4.29.46-When a person is fully engaged in devotional service, he is favored by the Lord, who bestows His causeless mercy. At such a time, the awakened devotee gives up all material activities and ritualistic performances mentioned in the Vedas.

In the previous verse, those who are in knowledge have been described as unable to appreciate the Supreme Personality of Godhead. Similarly, this verse indicates that those who are followers of the Vedic rituals, as well as those who are followers of fruitive activities, are unable to see the Supreme Personality of Godhead. In these two verses both the karmīs and jñānīs are described as unfit to understand Him. As described by Śrīla Rūpa Gosvāmī, only when one is completely free from mental speculation and fruitive activity (anyābhilāṣitā-śūnyaṁ jñāna-karmādy-anāvṛtam[Madhya 19.167]) can one engage in pure devotional service without being polluted by material desires.

The significant word ātma-bhāvitaḥ indicates that the Lord is awakened in one’s mind if one constantly thinks of Him. A pure devotee is always thinking of the lotus feet of the Lord (sa vai manaḥ kṛṣṇa-padāravindayoḥ). A pure devotee cannot remain a moment without being absorbed in thoughts of the Supreme Personality of Godhead. This constant thinking of the Lord is described in Bhagavad-gītā as satata-yuktānām, always engaging in the Lord’s service. Bhajatāṁ prīti-pūrvakam: this is devotional service in love and affection. Because the Supreme Personality of Godhead dictates to the pure devotee from within, the devotee is saved from all material activities. Even the Vedic ritualistic ceremonies are considered material activities because by such activities one is simply elevated to other planetary systems, the residential abodes of the demigods. Lord Kṛṣṇa says in Bhagavad-gītā (9.25):

The word ātma-bhāvitaḥ also indicates that a devotee is always engaged in preaching to deliver conditioned souls. It is said of the six Gosvāmīs: nānā-śāstra-vicāraṇaika-nipuṇau sad-dharma-saṁsthāpakau lokānāṁ hita-kāriṇau. A pure devotee of the Supreme Personality of Godhead is always thinking of how fallen, conditioned souls can be delivered. The Supreme Personality of Godhead, influenced by the merciful devotees’ attempt to deliver fallen souls, enlightens the people in general from within by His causeless mercy.

This material world, the cosmic manifestation, is created by the Supreme Personality of Godhead, and the living entities have come here to enjoy themselves. The Vedic instructions guide them according to different regulative principles, and intelligent people take advantage of these instructions. They thus enjoy material life without being disturbed. This is actually illusion, and to get out of this illusion by one’s own endeavor is very difficult.

The general populace is engaged in material activities, and when people are a little advanced, they become attracted by the ritualistic ceremonies mentioned in the Vedas. However, when one is frustrated in the performance of these ritualistic ceremonies, he again comes to material activities. In this way both the followers of the Vedic rituals and the followers of material activities are entangled in conditional life. These people get the seed of devotional service only by the good will of the guru and Kṛṣṇa. This is confirmed in Caitanya-caritāmṛta: guru-kṛṣṇa-prasāde pāya bhakti-latā-bīja.

When one is engaged in devotional service, he is no longer attracted to material activities. When a man is covered by different designations, he cannot engage in devotional service. One has to become freed from such designative activities (sarvopādhi-vinirmuktam [Cc. Madhya 19.170]) and become pure in order to serve the Supreme Personality of Godhead through purified senses. Hṛṣīkeṇa hṛṣīkeśa-sevanaṁ bhaktir ucyate: the service of the Lord through purified senses is called bhakti-yoga, or devotional service. The sincere devotee is always helped by the Supersoul, who resides within the heart of every living entity, as Lord Kṛṣṇaconfirms in Bhagavad-gītā (10.10):

“To those who are constantly devoted and worship Me with love, I give the understanding by which they can come to Me.” This is the stage of becoming free from the contamination of the material world. At such a time a devotee makes friends with another devotee, and his engagement in material activities ceases completely.

At that time, he attains the favor of the Lord and loses his faith in material civilization, which begins with varṇāśrama-dharma.Śrī Caitanya Mahāprabhu speaks clearly of one’s becoming liberated from the varṇāśrama-dharma, the most exalted system of human civilization. At such a time one feels himself to be perpetually the servant of Lord Kṛṣṇa, a position taken by Śrī Caitanya Mahāprabhu Himself.

Some Conclusions - In this one purport alone Srila Prabhupada sums up the entire gamut of degraded modern or ancient progressive civilization.. Varnashrama Dharma is progressive pious materialistic civilization which simply does not exist today in the world . Today it is only animalistic life-eat sleep mate defend, then die and go to some hellish destination which they know nothing about. So for those pious souls who are fortunate to take to some form of regulated pious activity (Varnashram duties) even they are attracted to karmic activities and later to speculative acts, none of which will give us the audience of God-Krsna.

They will receive nice facility for sense gratification of all sorts-and he says- that is all illusion. But Prabhupada further says when a devotee is blessed by another devotee he becomes free from karmic and jnana khanda activities.Unless one gets the seed of bhakti from a pure devotee this illusory life thru karma khanda and jnana khanda activities will just continue as one is satisfied with so called comfortable material living. But he never gets free from the wheel of samsara, continual birth and death.

So where is the real happiness or satisfaction by continually sitting on a ferris wheel at the carnival-life after life? The actual process followed and recommended by pure devotees is to constantly engage in the Lords service favorably and without motive or mental speculation. Many devotees seem to find some pleasure in continually hearing about fallen gurus world events of disaster, etc etc, yet this is not what the Srimad Bhagavatam advises us to do. We will find our time better suited if we are constantly thinking of Krsna and how to serve Him-that will make us happy and stop materialistic life.