Paramadvaiti Swami Should "Retire in Vndavana" 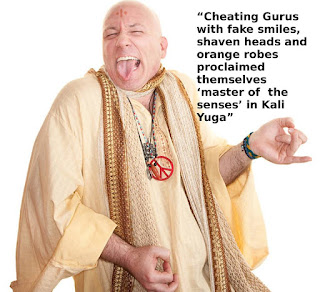 [PADA: After his many "photos of hugging women" problem, and then we find out he is "getting massages" from women, then we find out -- its "much more than massages." And now he is maybe going to retire? What? No explanation that he and the other fools were never qualified to be acharyas in the first place?]

JD: I see the situation is more serious than I knew and I feel that it is my duty to let Paramadvaiti swami know. I am sharing this thread with him. I have also been receiving private messages and I want you all to know that I have told him again the following, as I did the first time around.

(1) The problem is not following the rules of sannyasa as given by Rupa Goswami. The making of many disciples, big projects and so on are all forbidden in the Bhagavatam. The Bhagavatam forbids a man from being alone with his own sister or daughter, what to speak of a sannyasi. Massages and so on are not a part of the austere regime of a sannyasi. The first thing is to follow sannyas vows strictly, probably for the first time. Not sannyas for prestige as is the case in IGM.

(2) Stop traveling around the world. Stay in Vrindavan and commit yourself to bhajan. You are in the last part of your life. Take shelter of the Dham in all seriousness and apply yourself to the practice of Krishna bhakti as taught by Rupa Goswami in Upadeshamrita.

(3) Apologize individually to every woman you have improperly touched throughout your career and make amends as far as is possible with each individually.

(4) Make a public statement confessing your transgressions and make some proper public atonement. Give up your position as acharya of VRINDA and let Atulananda Swami (or some other well-situated leader, grihastha or sannyasi) be the acharya.

I would also ask for senior godbrothers of his, whether Bhakti Sudhir Goswami, Nrisingha Maharaj, Tripurari Maharaj and other members of the WVA also to intervene and ask him to do what has been suggested here. Otherwise, all the good work that he has done will be for nought and he will have brought all his own gurus and the entire Vaishnava religion into disrepute, his name will be sullied forever.

If I am any friend of his, indeed if I am a friend of BAP and a lover of this beautiful Vaishnava dharma, then I say what I think here and hope that for the sake of Mahaprabhu, Srila Prabhupada, Srila Siddhanta Saraswati Thakur and Bhaktivinoda Thakur, that he make an attempt to correct the blemish he has brought upon their names.

[PADA: Good suggestions. Bravo. Main thing is in my opinion, we have to admit that neophytes cannot and should not take the post of acharya / guru / parampara member. Srila Prabhupada warned us a number of times that if we neophytes take the post of diksha guru / or even allow people to touch our feet, we will be taking other's sins, and this will over burden us and cause us to fail. And that is happening to them left, right and center. ys pd]

JD: They do and they did. A low grade disciple will naturally gravitate to a low grade guru. This is not a bad thing in itself. Everyone seeks their own level. Even a cheater who gives the Holy Name -- namabhas, namaparadh -- still gives the semblance of the Holy Name. The shastra gives both verdicts. It is good, it is not good. It is indeed both.


[PADA: Yes, but one unfortunate result is that they create a united body of angry disgruntled ex-disciples who start web sites and forums attacking the entire Krishna religion as a bogus process. In other words, they are generating permanent angry enemies against the religion. That is for sure not so good, because it makes it a lot harder for the sincere to preach.

That is why Rupa Goswami says these false gurus are creating a disturbance for the sincere devotees. Of course these fallen gurus are sometimes a useful tool for me, to show people that its better not to accept them in the first place. In any case, ordinary citizens will sometimes write me asking about these sites of the disgruntled, and its a whole mess for me to have to try to explain what happened here, and more importantly, I have to try to explain why the so-called sincere people seemed to be aloof and did not try to check and control these problems a long time ago, including all sorts of deviations that went on and on in ISKCON with little checks and balances from the so-called sincere people. Its creating a not so good impression of the religion itself. ys pd]

KP: A huge part of such problems is taking sannyasa in the first place. It is forbidden in the age of Kali for a good reason. While devotees pretend it doesn’t apply to them, the real life shows they’re wrong. And taking sannyas in relatively young age is especially impractical.
Posted by krishna1008 at 6:50 AM