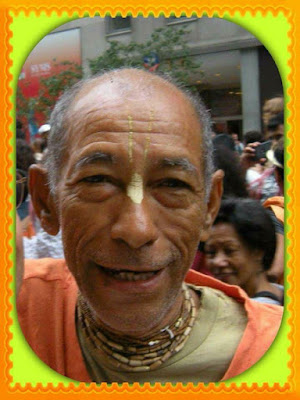 [PADA: Viprahita prabhu was an old friend of ours way back in the day, where even then we joked about how most of ISKCON's neophyte devotee leaders and GBC's were too arrogant and puffed up to be very advanced devotees. He was a very kind and loving person, who loved the chant the holy names.

Later on, he told me he was "fried" with these GBC's "gurus" and he could not cooperate with their process. Another refugee of guru-wars! Anyway, he wanted to serve Krishna -- and that means, Krishna will help him along that road. No question, anyone who wants to sincerely serve the Lord will get that facility from the Lord.

However! This is another red flag warning to all the rest of us still standing here, the time will come for each of us to join him in leaving this present body. That is one way Krishna warns all of us of how temporary this life is.

I wish him all the best in going along to his next destination, may Krishna bless his soul. ys pd]

Dandavat Pranams! All glories to Sri Sri Guru and Gauranga!

I'm sorry to have to announce that Srila Prabhupada's disciple Viprahita Das Prabhu has left this world at 5:10am this morning. There will be a funeral service this afternoon. We're sorry for the short notice. The details are below as well as a short biography of Viprahita Prabhu's life! Jaya Nitai Gauranga!

Viprahita Prabhu was initiated by Srila Prabhupada in 1974 in the Henry Street, Brooklyn Temple. He was born and raised in Dominic Republic and his family came to New York in the 60’s. Viprahita was a yoga teacher in New York before joining ISKCON. He did book distribution and preaching in New York, Hong Kong. Later he went to Los Angeles to serve in the Spanish BBT as a translator.
He spent some time in Miami doing preaching and deity worship. He went to Puerto Rico in 1984 to assist in running a preaching center.

He married his wife, Ananga Manjari there, and they moved to Alachua in 2013. He met the devotees of Srila Bhaktivedanta Narayana Maharaja in Alachua and became attracted to serving Sri Sri Radha Govinda. He would daily do the morning puja and bathing until he became too sick to continue.

Viprahita Prabhu was a joyful and humble devotee who loved to dance in Kirtan. He was loved by all and he will be remembered for his oceanic smile and ecstatic dancing, especially on HariNama Sankirtan! Viprahita Prabhu is survived by his wife and daughter, Anne Jeanette (Anasuya dd) who lives in Orlando.
Posted by krishna1008 at 3:51 PM