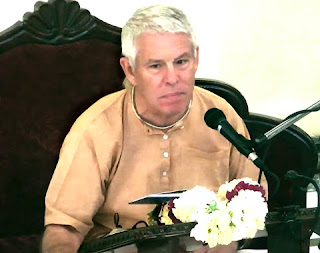 [PADA: Yep, we knew it, the Los Angeles "Srila Prabhupada festival" would have at least some speakers who would attack Srila Prabhupada and / or his writings, and they would defend the JAS illicit sex guru parampara process -- including re-writing the books of the pure devotee. It seems every year at this festival they bring in some of these anti-Prabhupada preachers and give them a big seat of authority, and then they call this a "Prabhupada festival"?]

“We changed Srila Prabhupada’s books because his teachings are outdated“

JG: I just saw Pancha Ratna (Pancharatna here on FB) at the Prabhupada Festival in New Dvarka, Los Angeles yesterday, who was sitting with Patrikananda. He made some rather disturbing comments regarding the 1972 edition of Bhagavad-Gita As It Is:

“It will never be printed or used by ISKCON again.”

“We changed Srila Prabhupada’s books because his teachings are outdated and ISKCON needed a modern message.”

I showed him, and asked him to read Srila Prabhupada’s title below his photo, from the 1972 edition, which he reluctantly read aloud, and expressed his annoyance: “greatest exponent of Krsna consciousness in the western world“, and then commented that it should have been stripped out of Jayadvaita swami (JAS) book, because it’s “unnecessary”.

When I informed him that Srila Prabhupada wrote it himself, he said “I doubt that, but even if it was written by Srila Prabhupada, it should be removed, and it’s unneeded.”

“Srila Prabhupada’s books were filled with mistakes and had to be edited.”

“When ISKCON sold Srila Prabhupada’s original books, during the 1970’s, the sales and interest in his books, no where comes near the interest people show towards JAS’s editions.”

Mahasringha das: I like Pancaratna’s personality but being a bought and paid for Iskcon company man clouds his intelligence. ………..

Padmagarbha das:  – Mahasrngara, how can you ‘like’ ANY part of somebody who insults Srila Prabhupada as has this snake in the grass. He is not 12 years old and can therefore hide behind the excuse of being immature and stupid, and easily influenced by bad association. He ‘chose’ to be “bought and paid for”!

Mahasringha das: Hate the sin, not the sinner. He’s done a lot of devotional service which is pleasing to Prabhupada. This is Kali Yuga so there’s no where to hide. Still hiding in the woods?

Padmagarbha das: my question to you was, “how can you ‘like’ ANY part of somebody who insults Srila Prabhupada”. There was no mention of “hate”. However, there are different degrees / forms of “sin”. One who engages in ‘sinful’ activities due to weakness, such as illicit sex, or taking intoxication is not on the same level as one who rapes and murders a child.

With the former [with someone who is ‘weak’] the saying “hate the sin and not the sinner” is perhaps appropriate, while the latter, the individual who has killed the child, he is justifiable due sever condemnation, and even hate [certainly by the parents of that child], and he should be punished most harshly by society.For you to attempt to deflect any harsh criticism of Panca Ratna, on the grounds of his likable ‘personality’, and that he has performed ‘a lot of devotional service’, brings me to present the following “analogy”.

[PADA: Right. Srila Prabhupada says the gurus and acharyas have to be pure devotees, whereas Jayadvaita swami's process "corrected" this idea to say -- gurus in ISKCON are sometimes fallen and engaged in illicit sex with men, women and maybe children. This means, they have not only changed the books, they have changed the whole idea that God is pure and therefore His successors also have to be pure. And Panca ratna has "performed a lot of service" ... by telling people that JAS is correct to say the parampara from God is chock full of deviants?

Srila Prabhupada "made a mistake" -- he forgot to tell us that gurus are often fallen if not debauchees? They have changed everything that Krishna and Srila Prabhupada said wholesale. How is this "a lot of service"? ys pd]
Posted by krishna1008 at 4:46 PM