JND: Why is there going to be a black Pyramid in Mayapur in front of the new ISKCON temple? Even the western design of the main temple was odd. All of the ISKCON temple presidents in India objected to the design and wrote to the GBC requesting a Vedic temple design for ISKCON world headquarters. But the GBC ignored all of them and chose to go with a western [Vatican style?] design, with an out of place black pyramid at the entrance.

There is a mystic sadhu who lives in a garbage pile in a remote village in South India. Whenever I would go to visit him he would tell me things he saw me do far away, in specific detail, which no one could have known. Sometimes he would ask me questions about why I was doing something he had seen me do (months before and far away). I came to understand he had a mystic vision where he could see things connected to people who come near him.

Last year, after not having seen him for about a year, I went to visit him. As soon as he saw me, the first words out of his mouth, even before greeting was, "sir, do you know that Srila Prabhupada was poisoned?"

He usually does not talk much about ISKCON, as he had no connection with ISKCON. So it was quite surprising to hear this from him. He went on to talk for several hours about who poisoned Prabhupada and why, and how over three years in his meditation he had been seeing various "files" from Prabhupada's passing that revealed everything to him. He also mentioned how they had infiltrated his movement to destroy it, and that they were hiding the real writings of Prabhupada from the world [by changing his books etc.].

At the end he told me not to say it publicly or it would be dangerous. He said we have to rely on Krishna to handle the matter, as none of us are powerful enough to deal with them.

It also becomes obvious why the child molesters have always been protected in ISKCON. Mayapur is still ran by the same child molesters regime that were there in the 80's. 40 years later and they were always protected and welcomed back discreetly. It was the same in other parts of the world too, but Mayapur was simply too obvious. Anyone with half a hen's brain can see what is going on here.

[PADA: Another mystic told a devotee he saw (on the subtle plane) a giant gargoyle like creature sitting on Tamal's shoulder. And as the gargoyle moved, Tamal would move the same way. 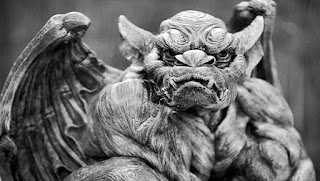 Another mystic said that a ISKCON leader had made a girl pregnant and then ordered her to get an abortion. Various people are calling the GBC "the Judas of ISKCON," which is what we said in the early 1980s. Some gurukulis told PADA the GBC is a secret Satanic society ... etc.

In sum! It does seem like the things we reported over the years are being confirmed more and  more, even by various mystics. Apparently, these are not "PADA's lies," these are real problems facing the ISKCON society. ys pd]