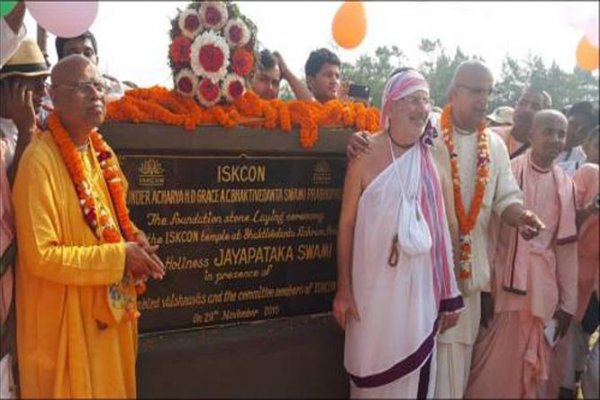 [PADA: Apparently, GBC folks do not consult much of anyone. Building another Lord Jagganatha temple in or even near Puri -- is not a good idea. ys pd]
Bhubaneswar: ISKCON’s proposed Jagannath Temple at Puri  has not only landed in a major controversy in Odisha but has also drawn protest from politicians and public  alleging that construction of another temple is  against Jagannath culture and tradition.
ISKCON has proposed to construct a Jagannath Temple over 18acres of  land at Sipasirubuli, on the Southwestern side of Puri at an estimated cost of Rs 100 crores.
Apart from a replica of Jagannath temple ISKCON Puri Project,  is proposed to built a  Grand Radha Krishna Temple, Chaitanya Mahaprabhu Museum,  Lord Jagannath Lila Museum,  Library,  Amphitheater and auditorium,  Amusement park for children,  Govinda’s restaurant,  International Guest house,  Ayurvedic Clinic and Yoga center,  Inmate ashram & prasadam hall, Convention hall,   Bhakta nivas (residence for devotees),  Vedic school, Dharmashala (low cost residence for pilgrims) and a  Vaishnav market area.
Opposing the proposed project, Senior BJP leader Bijay Mohapatra Monday revealed sought clarification from ruling BJD and alleged that the temple is against the culture of Odisha.
“ISKCON’s proposed temple at Puri is against Jagannath culture and tradition. It is a conspiracy to destry the culture. The state government should give a clarification on the proposed project.” Said  Senior BJP leader Bijay Mohapatra.
Even, ruling BJD has opposed the proposed project.
“I personally oppose the project and the government would also oppose  the project,” said BJD Spokesperson Sameer Das to media persons here.
Notably, ISKCON had  inaugurated the beginning of a grand project at Jagannath Puri by performing the bhumi puja and installation of Ananta Shesha on the 18 acre ISKCON project land in a grand ceremony in an annual three day Puri Parikrama (circumambulation of Jagannath Puri) organized by Bhakti Purushottam Swami, ISKCON’s Governing Body Commissioner for much of Eastern India on November, 2015.
- See more at:

http://www.prameyanews7.com/en/jan2016/odisha/11966/ISKCON%E2%80%99s-proposed-Jagannath-Temple-at-Puri-lands-in-controversy-ISKCON-Jagannath-temple-Puri-Odisha.htm#sthash.Eh2yf0VZ.dpuf
Posted by krishna1008 at 8:53 PM