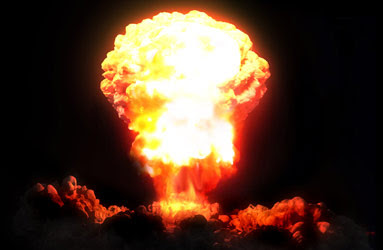 PADA: I am sorry that you and a few other devotees are advocating for WW III to happen, and you are thinking this will help things progress along for the world. It won't. Its sort of nihilism, lets burn the village to save it. The Bhagavad Gita correctly states that demons create these horrible weapons meant to destroy the world, and its not something Krishna is happy with. We should not be happy with these devices either.

Yes animal killing and abortions might slow down after a nuclear war, but in the process, the war will kill millions and perhaps billions of animals and babies, and leave many more millions of animals and babies without sufficient means to survive, so they will suffer badly, and die eventually while suffering badly. Lets not forget that radiation poisoning kills more people (and animals) later on than the initial bomb blast.

So its sort of like -- fixing a problem by expanding the problem? We are going to stop animal and baby killing, by killing millions and billions of animals and babies? I understand that some devotees are very frustrated with events in ISKCON and in the world, and they want things to end soon, but this is not the way forward. At least the Christians are hoping Jesus will return soon to save things, that sounds like a more progressive and positive attitude in my opinion. The Christians want some good events to turn things around, and we should too.

Also sorry to have to say this prabhu, but abortions and animal killing will continue -- even after a nuclear war. In fact, you are right that a nuclear war will create a giant halt to the current society and there will be no vehicles and modern life will pretty much vanish. Except that means, a huge shortage of vegetable products, because the whole current vegetable production process will be disrupted.

Its possible that a few devotees could survive the initial blast in the bombed out cities, but then they'd have to eat animals during the survival crisis, because they will no longer be able to drive to the supermarket to get their potatoes. What will devotees eat if there are no supermarkets left standing? The karmis at least will start eating right away, because they will begin to round up all the stray animals and kill and eat them. What are the devotees going to do? They are not prepared for this event. They can chant, OK fine, and that's good no matter what, but this is not a practical plan to escape the effects of a giant war.

I am not seeing the war idea as a good fix. And roving bands of hungry folks will hunt and kill the remaining animals wantonly, probably very cruelly with crude methods, and they will not take kindly to us objecting. And desperate folks will create all sorts of other crimes, because law and order will be stopped for the interim. A break down of law and order will be simply -- very dangerous.

Also, almost all the devotees we know of are presently living in big cities, including ourselves. If these big cities are totally destroyed, and H-bombs are many, many times more powerful than Hiroshima bombs, most of these devotees will also cease to exist. Very few of the devotees live in rural areas, so it seems most devotees will die if these cities are destroyed.

You think there will be great preaching, but I am not sure who will be left to do the preaching?

Worse, Srila Prabhupada's plans for rural communities never evolved. The bulk of Krishna's devotees are linked to life in the big cities, and they will go down if the big cities go down. And you are also right, there will be no more car and truck transport, and no more electrical power etc. left, and that means -- the people who have cows will no longer be able to care for them either, because for starters they need electrical water pumps for the cows water etc. and trucks to move the hay to feed the cows etc.

I see lots of cows living around here outside the city, and these cows rely on electrically pumped in water and trucked in hay etc..Who will create electricity for the pumps and truck in the hay? And if there is no electricity to run their water pumps (some of the farm's water is over 1,000 ft. down in the valley), who is going to bring water to these cows?

And if there are no tractors or trucks, who will make the hay and truck the hay in, to feed the cows? Sorry these cows will die as well, and die slowly from lack of food and water. That is unless the hungry hordes find these cows first, and chop them up for dinner. Sorry! The cows will also go down along with all the rest of us -- and for another good reason, their hay will be full of radioactive dust particles, they will die from radiation poisoning from eating that dust, it will settle all over the valley and kill these cows. A Russian spy was killed with radioactive material, and its said only a teeny  sized particle was all they needed to kill this man. Everyone who is outside (like cows) will be covered with this stuff, eating this stuff, etc.

OK abortion is bad, agreed, but war will kill millions and millions of babies. And radiation poison will kill, ok just about everything else. My feeling is that as devotees, we should not wish suffering on other beings. A war will create massive suffering, and enormous hardships for the survivors.

The farms Srila Prabhupada wanted us to have, to shelter us from mundane calamities and maybe even give us some sort of fighting chance in wars, never got done. In sum, I think advocating for a nuclear war is not a very progressive thing for us to meditate on, nor is it going to impress outside people who may think advocating this is very fanatical and -- no small amount of mean and cruel.

Of course, there was a war in Krishna's time, but there were actually good and bad sides to the war, and the good side was meant to win. Nowadays, all the actors are bad, so the winners and losers will all be bad, in sum -- there is no good winner. Worse, the winner might be a much worse system than what we have now, for example a secular fascist winner might outlaw the Krishna religion altogether,

There is a similar group of devotees who are hoping the stock market will collapse and the dollar will become worthless, ok they want economic collapse and subsequent criminal chaos and disorder. That is why it is said, be careful for what you wish for.

As devotees, we should be well wishers of the society and it just does not fit the image of a devotee of God to wish devastation and suffering upon others, since all of them are already suffering -- and they have been suffering for billions and billions of lifetimes. We should wish to save them, not destroy them, because for starters, they and their civilization are already being destroyed by the time factor.