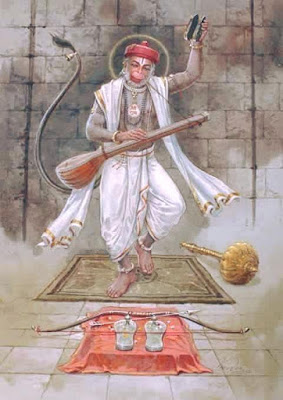 Hanuman was certain he had found Sita. In the tree Hanuman considered what to do next. He wanted to comfort Sita and give Her Rama’s ring, but he was not sure how to approach Her. She would likely think him to be Ravana in disguise using sorcery to trick her.

She might cry out and alert the Raksasas. What then? He could be killed or captured. How would Rama’s purpose be served if that happened? What other monkey could leap across the ocean and return?

Hanuman thought carefully. He decided to remain in the tree and sing the praises of Rama so that Sita could hear him. The Raksasi guards had moved away to a distance and would not notice. Hanuman started to speak out loud.

“In the city of Ayodhya there lived a great ruler named Dasaratha. That lordly king begot a valiant son named Rama, who possesses every good quality. Going to the forest in obedience to His aged and pious father, Prince Rama slayed in battle many violent demons.”

Hanuman related in brief Rama’s history up until the time of Sita’s abduction. He described what had happened to Rama in Her absence since then, leading up to his own leap across the ocean and arrival in the ashoka grove.

Sita was struck with wonder to hear the voice from the tree. She looked up and all around Her, feeling joy upon hearing Rama’s activities described. As She gazed into the boughs of the tree She saw among the leaves Hanuman’s tawny figure.

The small monkey sat humbly with his palms folded. Immediately She became afraid. Who was this creature? What was he doing in the tree? Was this Ravana’s trick? But remembering the auspicious omens, Sita became thoughtful. She prayed to the gods that Hanuman’s words might prove true.

Hanuman slipped down from the tree and bowed low before Sita with his joined palms raised above his head. “I assume You are Sita, consort of the highly blessed Rama. I am an envoy dispatched by Rama to seek You, O noble lady. Along with His brother Laksman, Rama waits in grief for some news of Your whereabouts.”

Sita felt overjoyed to hear of Rama, but She was still suspicious. What if this was Ravana? Nevertheless, upon seeing the monkey She was feeling a strange calm and peace of mind. She looked carefully at Hanuman and asked, “How can I know that you are not Ravaṇa?”

Hanuman reassured Her. He described the features of both Rama and Laksman in great detail, telling Her everything he knew about the two princes. Hanuman then told Her about himself and how he had come to meet with Rama.

He spoke confidently. “Now that I have found You I will soon return to Rama. You will see Your lord arrive here before long, marching at the head of an unlimited number of powerful monkeys and bears.”

Hanuman showed Her the ring Rama had given him. He handed it to Sita and She immediately recognized it. She was now convinced by Hanuman. Standing up in excitement She felt unlimited joy.

Her eyes shed tears of happiness and Her face shone brightly. She praised Hanuman. “You have achieved a great feat in crossing the wide ocean and entering this fortified city. O noble monkey, surely you are the foremost of Rama’s servants.”

Sita wondered why Rāma Himself had not come there. Why had He not smashed the city of Lanka and taken Her back? Was He still strong in mind and body? Was Lakṣman well?

Sita questioned Hanuman eagerly and the monkey replied, “Rama does not know Your exact whereabouts, O godly lady, but He is well and awaiting news of You. As soon as He hears my report He will come here with His army and rid the world of Raksasas. There can be no doubt of this whatsoever.”

Hanuman assured Sita that Rama was always thinking of Her. Indeed, His mind was distracted by grief due to Her separation. He could not eat properly and hardly slept.

Rama sat for long periods gazing into the distance, sighing heavily. He would not even brush from His body gnats and mosquitoes, oblivious to everything as He thought of Sita. From time to time He would call out Her name and shed tears.

Sita felt simultaneous joy and grief as She heard of Her husband and His own grief for Her. She sat lost in thought of Rama for some time, looking like the bright moon seen through a veil of clouds.

The monkey’s words were like nectar mixed with poison. She could not tolerate hearing of Rama’s sorrow. Her beautiful eyelids with their long black lashes fluttered as She blinked away Her tears. She spoke to Hanuman, who sat with his palms folded and head bowed.

“O valiant monkey, you must quickly bring Rama. Only a short time remains till the merciless Ravana will have Me killed. The demon will not heed any good advice and is bent on bringing about his own destruction, held as he is in the grip of Death.”

Sita told Hanuman that She had heard how Ravana’s brother and minister, Vibhishana, had repeatedly exhorted the demon king to return Sita.
He and other wise Raksasas warned Ravana that keeping Sita would result in the annihilation of the Raksasas. But Ravaṇa would not listen. Sita had heard this from Vibhishana’s wife, who had befriended the princess.

When he heard that Sita’s life was threatened, Hanuman became alarmed. He spoke urgently. “Let me take You from this place immediately, O princess of Mithila. You may climb upon my back and I shall leap across the sea with ease. Do not be fearful. I could easily carry the whole of Lanka, Ravana and all. Therefore mount upon my back and I shall transport You to Rama’s presence this very day.”

Sita looked at Hanuman, who still appeared as a normal monkey less than half her size. She spoke in surprise. “Your proposal is surely quite monkey-like, O gallant one. How shall I even get on your back?”

Hanuman was piqued. This was the first time his strength and power had been questioned. Obviously Sita was not aware of his abilities. He needed to give Her a demonstration. Hanuman began to expand his body, growing up to a huge size.

He looked down at Sita and said, “I have the capacity to lift up this entire island, with its hills, woodlands, lakes, city, defensive walls and the very lord of Lanka, Ravana himself. Be done with your hesitation, O princess, and allow me to carry You to Rāma.”

Sita gazed up in amazement at Hanuman, who stood before Her like a tawny mountain. She was reassured of his ability, but was still doubtful about traveling on his back.

She said, “You are like the wind-god himself, dear monkey. When you fly with great speed it will be difficult for Me to hold fast to you. The force of your flight will likely render Me unconscious. I will then fall into the ocean, only to be devoured by fierce aquatics.”

Sita also feared that Hanuman would not be able to leave Lanka with Her. The Raksasas would spot them and give chase. They were capable of fighting in the air with powerful weapons and Hanuman would be hard-pressed to retaliate as he flew with Sita on his back.

Sita explained that there were still other reasons why She could not take up Hanuman’s offer. “I have vowed never to touch the body of any man other than Rama. I am already mortified due to being grasped by the sinful Ravana.

I could not voluntarily touch another man. Nor could I allow anyone other than Rama to rescue Me, thereby diminishing Rama’s fame. I therefore prefer to wait for My lord, confident that He will soon arrive.”

Hanuman nodded in assent to Sita’s words. She was right. It would not be possible for Her to cling to him while he flew swiftly back. And he respected Her chastity, which was without comparison in the world. Resuming his normal size he said, “I shall now go back to Rama. Please give me some token so that He will know that I have actually met with You.”

Sita replied to him in a voice choked with tears. “You may give Him this token in the form of a message. Remind Him of the time when We lived together on the Chitrakuta mountain and how I was once attacked by a crow and Rama gave Me protection.”

Sita told Hanumān in detail about the incident. The crow in question was Indra’s son and he had wanted to witness Rama’s prowess. He had attacked Sita, whereupon Rama had thrown a blade of grass at him, imbuing it with the power of the brahmastra.

The empowered grass had chased the crow across the universe and finally destroyed one of his eyes. Rama would remember that incident and know that only Sita could have recalled it.

Hanuman asked if Sita had any message for Rama. The princess replied, “You should report to Rama My wretched condition. Although I have the invincible Rama as My protector, I now appear like one forlorn. He should lose no time in rescuing Me. He is capable of advancing against the entire host of gods and demons united together, what to speak of Ravana.”

Sita took from Her cloth a brilliant celestial gem which She had used to decorate Her hair. Handing the yellow jewel to Hanuman She said, “Give this gem to Rama and say to Him, ‘Even as Vishnu rescued the Goddess Earth from the depths of the ocean, You should descend into the midst of the Raksasas and save Me.’ O monkey, kindly deliver this message to My lord.”
Posted by krishna1008 at 6:29 PM