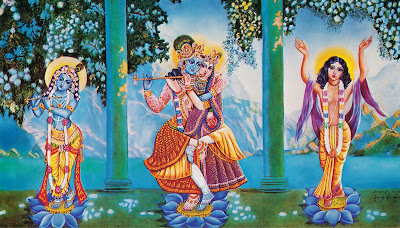 Radha says: Oh dear Krsna, please listen to Me. I’ve just had an amazing dream. I saw a river flowing with sparkling waters and sandy banks just like our Yamuna. There were many people who were expertly dancing just as in Vrndavana. The air was filled with the sound of drums and cymbals, just as it is here. And there was a brahmana, the jewel of the twice-born, who was exceedingly effulgent with a golden complexion. He was submerging the whole world in an ocean of ecstatic love.

Among so many verses based on the mode of goodness, these nine stanzas entitled Svapna-vilasamrta indicate the transcendental conclusion regarding Sri Caitanya Mahaprabhu’s pastime of descending into this world. Srila Rupa Gosvami has written one verse in his notes:

"Sri Radha is Krsna transformed by intimate love, as well as the pleasure potency of the Lord. They are therefore both of one body, but in the past They accepted separate bodies. Manifested as Sri Caitanya, those two have now united as one. I offer my humble obeisances to Lord Caitanya, who is that very same Krsna endowed with the mood and luster of Sri Radha."

This verse raises many doubts. If it is said that being one, Radha and Krsna attained two separate bodies, before that, what was in the one body? If it was Krsna’s essence, Radha’s essence could not have been present. The answer is that They are both one Self, but in a transcendental manner. They are manifested as two bodies for performing Their pastimes. This statement establishes the nature of the identity of Radha and Krsna. Of course, someone might say that if Radha and Krsna are presently manifested as Sri Caitanya, before that, Sri Caitanya did not exist.

"All the bodies of the Supreme Lord are eternal and everlasting. They are never subject to material destruction nor born of matter. They are the embodiment of supreme bliss and are completely transcendental."

On the basis of this scriptural evidence the eternal nature of the Supreme Personality of Godhead’s form is firmly established and the bad logic of the Mayavadis is defeated.

Sometimes He would call out "Krsna! Krsna!" At other times He would cry out, "Oh Radha, where are You?" Sighing deeply and falling on the ground, He would lose all composure. Sometimes He would also dance ecstatically with His affectionate associates and thereby cause the whole world, from the lowest blade of grass up to the creator Brahma, to cry.

Upon seeing this wonder, oh how My intelligence became bewildered! I thought, "Could He be My lover Krsna? Or is He my own Self? If He is Me, then where is My dearest Krsna? If He is Krsna, where am I?"In this way, I was becoming more and more bewildered until I fell into deep slumber.

Krsna says: "Dear Radha, struck with wonder, previously I showed you My form as Narayana as Ramacandra and other incarnations, but that did not astonish You. How has that brahmana managed to bewilder You, and what is the nature of that bewilderment? O, who is He and what is this all about?

Once while enjoying some intimate moments, Radha said to Krsna, "Because of their unsteadiness, men cannot understand the happiness and other experiences of loving pastimes the way women can, and men cannot understand the inner feelings of women." Then Krsna said, "I will always be able to understand Your inner feelings by one special form of Mine." To this Radha said, "Your talking lies!" Again Krsna said, "No I am speaking the truth." Radha said, "Then show Me that form." That is why Mahaprabhu appeared to Her in a dream.

Having spoken to His beloved Radha, Krsna thought for a while and chuckled. At that moment, the Kaustubha gem, knowing the meaning behind all this, began to shine. As soon as it did so, all the details of the dream, as well as all the features of that pastime, were completely revealed.

In the Srimad Bhagavatam it is stated:

Sridhara Gosvami explains this verse as follows. "The Kaustubha gem’s real identity is the pure consciousness of the living entity. That is the particular opulence of the Kaustubha gem which the Lord wears."

As soon as Radha saw the dream vision exposed, She said, "Aha! As I am outstanding in the dealings of intimate love, so is Krsna’s cleverness immeasurable!" She thought about all this for a moment and then spoke.

Perceiving everything clearly, Radha said, "Oh dearest Krsna, I am completely aware of why You were just laughing. You are that golden brahmana. I also know why You didn’t explain anything to Me. I am also that brahmana. These things were revealed to Me by the glimmer of Your Kaustubha gem and therefore I believe them.

By lighting up Your Kaustubha jewel, which is the medium for all souls sharing affection with You, You thereby show many projected visions to all souls again and again. This is how it seems that You have manifested Your incarnations along with all Your energies, thus presenting an exhibition of Yourself and all Your pastimes before each and every soul. In this way, You drown the entire universe in the ocean of ecstatic love.

At the time of Your name-giving ceremony, Gargamuni, who is learned in the Vedas, said in the presence of Your father Nanda Maharaja: "At some time your son will appear with a yellowish complexion. There is no doubt about it." Therefore My dream is true, and not a delusion. You are that very same person. The vision I had is real.

Whosoever’s honeybee-mind drinks the nectar of this pastime dream, oh! That wise person will awaken from the dream of doubt in this regards (concerning the actual identity of Lord Caitanya). After attaining Lord Caitanya, he will sport in the ocean of confidential love. Thereafter he will become the lucky recipient of the unequalled mercy of Lord Sri Krsna, the king of the bowers of Vrndavana.

In the ninth chapter of the Kapila-tantra it is stated: Once Radha said to Krsna, ‘My dear, listen to what I say. I wish to have oneness of essence with You, My dear Lord. Please manifest a form united with My mood, a supreme form giving joy to the heart, situated within both of Us, revelling in auspicious pastimes and endowed with the mellow of ecstatic love."

Hearing these words of His beloved, which were indicative of the topmost love, Lord Krsna the guru of the world, by His own will eagerly manifested that form as described by Radha. By means of prema (pure love) and acintya-sakti (inconceivable energy), Sri Krsna manifested a form endowed with the effulgent mood of Radha. Thus the unborn Lord Krsna’s essence achieved a twofold condition: inside—Krsna, outside—Gaura. Of the two, Lord Gauranga is absorbed in devotional service. He has achieved the ecstasy of pure love of god, is without any limiting material adjuncts and is Lord Sri Krsna Himself.
Posted by krishna1008 at 4:23 PM