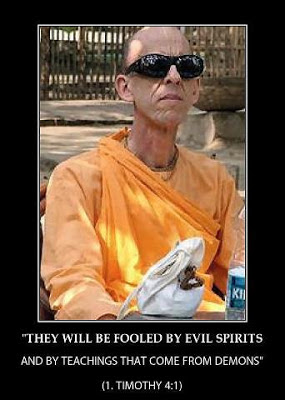 Co-founder of the debauchee messiah's project.

Swarup Hebel : In praise of my God brother (Jayadvaita swami)

I am well aware of the controversy surrounding the editing of Srila Prabhupada's writings in the years since his departure and it's very unfortunate and disturbing to me that included in some of these often heated exchanges between those for and those against I've seen very mean-spirited and hateful words meant to disparage and denigrate the good name and character of my God brother, Jayadvaita Swami.

[PADA: But its ok for Jayadvaita to be one of the biggest cheer leaders of the "enforced cult ritualistic worship of drunkards / drug addicts / sexual predators / criminals / and sometimes pedophiles -- as acharyas -- process"? A process, which bans, beats, molests, sues and assassinates the Lord's Vaishnavas? A process that had to be sued for $400,000,000 for mass molesting, and which has bankrupted ISKCON both financially and morally? How is support of all this process "good character"? And Jayadvaita is one of the vociferous enforcers of said process?]

Jayadvaita was one of the first devotees ever to explain the philosophy of Krishna consciousness to me.

[PADA: Jayadvaita says that in ISKCON their guru parampara contains "illicit sex with men, women and children." Why is that your guy's idea of Krishna consciousness at present?]

When I first began visiting the 61 Second Avenue center in New York City during the summer of 1969 he was always right there, greeting the guests with his big friendly smile. He knew my friend Jimmy Feldman who had joined before me but who left New York for New Vrindaban after his initiation. Jimmy told the devotees in New York that his friend Steven (me) would soon be showing up. The first thing Jayadvaita ever said to me was, "So you're the Steven who Yamunacarya kept telling us about."

A few months after I moved into the ashram my sister came to the temple. Unbeknownst to me she left San Francisco where she was living at the time and returned to New York and the first thing she did when she got back was to come into the City to visit me at the temple for the first time since I joined. As I was getting ready for arotik one evening Jayadvaita came over to me and said, "You'll never guess who I've been talking to in the temple room for the past hour. Your sister Michelle is here." A week later she joined ISKCON but since there was no facility for women at the Second Avenue ashram we sent her to Boston.

Jayadvaita and I were brahmacarys together in New York and we served together in Boston where we both relocated to work with ISKCON Press. Our friendship goes back a long way and I will be forever grateful for all the loving guidance he gave both my sister Manmohini and me especially during those early years.

Jayadvaita Swami is without a doubt in my mind one of the most intelligent people to have ever joined Srila Prabhupada's mission. His devotion and dedication to Srila Prabhupada is without question and his strict adherence to the principles of both the brahmacary and sannyas ashrams has been and continues to be impeccable.

[PADA: Umm, promoting the worship of illicit sex with men, women and children as Krishna's gurus, successors and acharyas is "strictly following" whom? Beelzebub?]

I may also not agree with the principle of changing Srila Prabhupada's books and perhaps it would have been better if only the obvious typos and glaring errors that slipped through the cracks were emended; however, I cannot and will not tolerate vicious attacks on my God brother's character and I won't allow it on my watch.

Thank you very much for allowing me this opportunity praise one of my dear God brothers. All glories to Sri Sri Guru and Gauranga. Hare Krishna.

[PADA: Well now we all know why us folks have had so much trouble opposing the GBC's molester messiahs program, they had all kinds of support from these Swarup type people. And the molester messiah's project still has many of these people acting as their cheer leaders / assistants / supporters. That is why the shastra says -- false gurus go to the darkest regions of the universe, and so do their supporters.

At least Jayadvaita is honest, he openly asks -- why in the hell are people chanting "Jaya Prabhupada" at the guru pooja? Oh boo hoo, they are not chanting the names of the people in my concocted illicit sex with men, women and children guru sampradaya! Thanks Swarup, now we know where you stand, and have been standing all along, you are with them. That is why we did the right thing in exposing you people. ys pd]