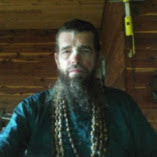 EJ: Kailasa spends virtually all his energy attacking the ISKCON institution. Maybe 1 article in 20 is attacking rittvik. He is pretty sectarian in his own right. No doubt some institutionalists like his anti-rittvik stuff. He agrees with them on that, but he is in no way a cheer leader for the GBC. Your interpretation is that Srila Prabhupada still wants to initiate after his physical departure. This is hardly self-evident due to all of his statements that he wanted his disciples to become guru. This is mukya pramana, or the direct meaning. Yet you apparently say that all devotees who accept those are not exclusively worshiping him. Great quotes. ys, EJ

PADA: Yes however, Kailash has been quoted all along by various GBC people and still is, and he was hanging out with Trivrikrama Maharaja and others writing papers for the ISKCON GBC's folks. And then, the GBC's folks were distributing his papers all along and they still send his stuff to me now. Yes, Kailash thinks the neophyte followers were meant to be diksha gurus and absorb sins like Jesus etc.

And that is what the GBC says, and that is why the GBC folks quote him all along. Srila Prabhupada said if we neophytes become diksha gurus we will be absorbing sins and this will make us get sick, fall down, or both, and many have died early due to these illnesses and fall downs (from taking sins?). Yes, only a pure devotee can be the diksha guru, and there has been a failure of efforts to do otherwise. And if the bhogha and disciples are not offered to the acharya, then who else should they be offered to?

A Kailash groupie could not even answer this basic question recently. The GBC says there will be some "others" acting as the acharya, and so does Kailash, that is why they promote his writing and GBC folks have done so for decades. As for mukhya pramana, saying that some "other" will be the diksha guru and not being able to give his name is, according to Srila Prabhupada, mayavada.

Srila Prabhupada says, a person has to give the name of the guru or else he is mayavada. To say some amorphous group of disciples will be guru is -- mayavada, there has to be a specific person named. There has to be the specific names of the specific links in the parampara, and that is why Srila Prabhupada takes a lot of time and trouble to name them. To say some unnamed member of a large group of disciples may or may not be the next link is speculation and impersonalism. No wonder GBC people love to quote his works. ys pd

EJ: There will be real acaryas in the future because Krishna wants that. The parampara will continue with someone after Srila Prabhupada. Not giving his or their names right now is hardly mayavada. Just because we have seen a lot of broken glass pretenders since 1978 doesn't mean there won't be another diamond. The spiritual sky is full of them. Actually GBC loyalists also say that Kailasa agrees with the rittviks on many points and that he is like them (you). Gots to go. I like you Puranjana prabhu. I am always indebted because you gave me the Guru Business. ys, EJ

PADA: There may or may not be future acharyas, again this is speculation on the future. Kailash groupies could not even answer my first question, who do we offer the bhogha and disciples to? So that is mayavada, they cannot even name any specific person who is the path to make these offerings. We have a religion where no one knows who to offer the bhogha and disciples to, and who is the actual current link to God?

Any brand new bhakta is our system knows the answer to this point right away. And GBC loyalists have loved Kailash all along because he agrees with their speculation that "someone else" could be, should be, might be, supposedly is, the next acharya. Mano rathena. If they have no name of the specific person who is the specific link now, that is of course mayavada. No name = mayavada. Kailash cannot name anyone at all either, he just says "some disciples" could be, might be, will maybe become, will eventually be -- but who knows for sure, yep its all someone "should have been, could have been, might have been, will maybe become (but who knows?)" etc ... its all speculation.

All glories to -- nobody. Of course that is mayavada, what else could that be? All glories to nobody is about as mayavada as it gets. Hee hee! Yes, the Professor tells all of his kindergarten children, "I want all of you to become PHD brain surgeons." That is fine, but it does not mean one, some, or any have become that already.

A devotee recently asked me to summarize in one sentence the whole problem I am having with various premature gurus and Kailash types and so on, and my answer was "they want anyone else, or even everyone else, to be the guru -- as long as its not Srila Prabhupada." Thought that sums it up well. As for Sukadeva and many thousands of others like them, they voted with their feet, and left that process because they wanted to emphasize Srila Prabhupada. ys pd

EJ: Puranjana prabhu, Pranams. Jaya Srila Prabhupada. I should know what Kailasa Candra dasa says having spent between 1986 and 2012 with him. He isn't saying what you write he says. He says people should worship Srila Prabhupada and offer bhoga to him. If they find someone bona fide to surrender to then they can change that. What you write about him is mostly sectarian politics, much like negative campaign ads where making opponents look bad makes you look good by comparison.

Despite your attempts to make your rittvik theory appear uniquely bona fide sanatana dharma, those who sincerely serve Srila Prabhupada still keep him in the center, simply because he is the last bona fide link in the sampradaya. Many just disagree that he is still wanting to accept disciples. Can't we move on from all this mudslinging?

I am quoting from the many papers Kailash and Rocana write? They say what the GBC says, that Srila Prabhupada is the posthumous, post samadhi, i.e. post mortem person, and he is not only that, he is another neophyte temple sevaka "shiksha" only devotee. You really need to read what they say? Rocana also commonly refers to Srila Prabhupada as the posthumous, post samadhi (post mortem) person, its on his site regularly.

And Kailash writes papers which the GBC folks send me on a regular basis, saying Srila Prabhupada is not the current diksha acharya for ISKCON? Of course they never tell us who is the source of divyam jnanam which destroys sins -- aka diksha -- except Rocana says we need to have tighter management of their GBC voted in diksha acharyas. He thinks he is the boss of the parampara, he is going to manage and contain it. Its in his constitution. If we offer bhogha to the acharya, then we cannot offer the new disciples to the acharya?

That makes no sense at all, we offer everything to the acharya, the bhogha, the disciples, etc. And that is why they are not making any training program of anyone. And Kailash and Rocana live like isolated hermits. They do not want to offer people to Krishna via the parampara and so they cannot move forward, same with both Kailash and Rocana. Meanwhile! We are making devotees because we have a system to place them into shelter of the acharyas, they do not have such a process. That should be self evident?

Remember the Rocana "guru reformers"? They said Srila Prabhupada is the posthumous, post samadhi, i.e. post mortem person, I recall all that vividly. And they still say that? And if these people are for unity, why do these folks always preach against what we are doing, and the GBC people cite them as authority? I have to also say that when Sulochana heard Rocana and the reformer pals were calling Prabhupada the posthumous, post samadhi person, he said, these people are totally envious of the acharyas and they think their material bodies are important because they are so-called living. How can we unify with that?

Of course the next problem is, Kailash says we cannot initiate people, so that means there will be no more deity cooks or poojaris. Wow! Krishna has to starve now? Why would someone want to starve Krishna? ys pd
Posted by krishna1008 at 8:20 PM