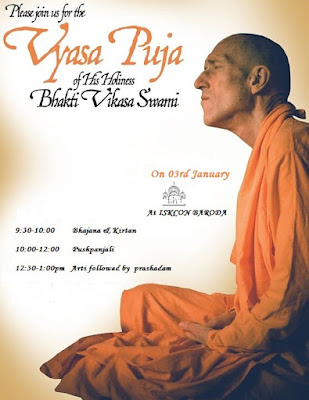 Yes, I am another Vyasa (any questions?)

Had a very long, very convoluted, but interesting discussion with a follower of  Bhakti Vikas Swami (BVKS). Its too long to post the entire thing here, in part because it wanders all over the map and gets diverted off topic a number of times. However, I think we could show some of the main points under discussion:

1) This devotee says -- the Bhakti Vikas folks pretty much agree with PADA -- the current ISKCON GBC's guru program is bogus. Thus, almost all of these GBC's gurus need to be removed or replaced. And that is why Bhakti Vikas Swami himself does not partake in the GBC's program. He stays aloof from them, if not boycotting their process. Ooops, therefore we need to promote the only person following Srila Prabhupada now, aka Bhakti Vikas Swami, because he has no connection to these bogus GBC's guru folks.

Its a pattern. So while all kinds of deviations are going on, ooops, not my fault, I am separate! I resigned! So "I am the ISKCON guru and leader, but only a leader of my teeny fiefdom and not the whole process." That makes the whole process in danger of deviation with no checks and balances.)

2) Anyway! Lets say so far so good, so why then is Bhakti Vikas Swami saying he is a member of ISKCON, if he does not adhere to the guru oversight committee and rulings of the GBC management group of ISKCON? How can a person be "a member in good standing" of a religion -- when he has no respect for the managerial body of that religion, and he does not agree with, or even agree to follow the rulings of that religion's managerial body?

If the managers are not following the guru, then that means the religion has left its roots and is fully bogus. It also means, there is really no one at the helm? The guru has abandoned the managers because they are deviating, then who will contain the deviations?

(Yes, the devotee agreed, this is really not a very good explanation. It means BVKS is sitting back letting us take the heat, and we get the death threats etc., while he holds back. He is letting others flap in the breeze of danger while he does not take proper action himself.)

3) Good news! Bhakti Vikas Swami is perhaps "one of the best managers ISKCON has, because his program is one of the few -- if not only -- programs that has not been compromised with scandals and bad publicity." Yes that is good. Maybe? So to sum up -- "the best manager in ISKCON" is aloof from -- or boycotting -- working with the actual managerial board, and has no interest in managing? Then we wonder why so many scandals evolve, when some leaders say they have no connection to the managing process? And some of their followers say, the only reason our guru cannot take part in the managing is, the managers will want to have our guru killed? And this is a bona fide religion?

Yes, Bhakti Vikas swami is only the Vyasadeva successor acharya of the religion, because he is not part of the actual managerial guidance group of the religion. OK, so there is no guidance at the steering wheel? That means the ISKCON ship can run into the rocks because the guru sector is not trying to steer it otherwise? Or worse, if the guru grabs the steering wheel, the hi-jackers will have him killed?

Therefore! When both the pilot and co-pilot have fallen asleep on the Boeing Jet with 400 passengers on board over the Pacific Ocean, and Bhakti Vikas Swami is the "only qualified person" to take over the controls, he is instead sitting in the back of the airplane sipping a cup of tea and doing nothing to help the crisis?

He is the only truly qualified person to take over the top managerial post to govern the society, therefore, he is boycotting taking the main managerial posts in the society? OK then, that means the Boeing Jet will crash while he is sitting in the back doing nothing to help fix the -- out of control -- situation?

(The best manager of the religion is boycotting taking a management role? OK then we wonder why the religion is in a tail spin all the time? The devotee agrees, this is setting a pretty lousy example. Its also creating a perpetual dysfunctional process.)

4) Srila Prabhupada says we neophytes cannot takes sins as diksha gurus. And if we do that artificially, we will have to suffer. Yet Bhakti Vikas Swami encourages himself and the other GBC that they can act like Jesus, be diksha gurus and absorb sins. And in fact BVKS says he is another Jesus too, and he can absorb sins as a diksha guru himself.

(OK the devotee had not thought about that, but agreed its a good point).

5) Bhakti Vikas Swami is only the sannyasa disciple of Jayapataka swami officially to take that post for preaching, but he does not follow JPS, he just took the sannyasa post from JPS to get a certification.

In the end, the devotee wanted to communicate more with me and asked if it would be fine if he discussed this all in detail later on. Sure! That means, he has a lot to digest and its going to take time, but it looks like progress is being made. At the end the devotee said to me, Hare Krishna and Haribol. That means, he is seeing that we have some pretty good arguments, and the GBC and their gurus, do not. At least he is now starting to wake up, and that is always good for us. ys pd