Wow! We can now worship illicit sex debauchees!
And that is advertised as -- the mercy of the Lord?

Apparently the speaker of this above video -- which has been translated as advocating violence against the Vaishnavas (those who do NOT want to worship the GBC's illicit sex acharyas process -- and they WANT to worship Srila Prabhupada instead) -- is named Audharya Dhama Prabhu, also known as Dr. Oleg Torsunov.

His guru is apparently a person voted into the GBC's debauchee acharya's program named Lokanath Swami. PADA already reported some time ago that Lokanath swami touched a young female inappropriately over a period of time when she was only 11, and this (now a grown woman) is a personal friend of PADA -- so we have this event confirmed. Then again Lokanath swami was criticized for having a female secretary and so on.

The GBC (Mukunda Goswami etc.) told the young girl's family that if they did not go to the police the GBC would remove Lokanatha from posts of authority, but instead the GBC (lied and) began facilitating having Guru Pooja ceremonies for Lokanath and they made him one of their star acharyas. Now a lot of people have complained to us over the years, well Lokanath swami is a nice guy! Gaura Govinda maharaja is a nice guy! Radhanath swami is a nice guy! And we should not be "too heavy" with these nice guys.

Except "nice guys" do not promote a process of the worship of illicit sex with men, women and children as God's successors, gurus, parampara members and messiahs, and orchestrate a program of banning, beating, molesting, lawsuits and assassinations? If that is our idea of a nice guy, we need to go all the way back to kindergarten and start our education all over again from scratch! Hee hee!

So there are people who say this is the "nice guy's" program, but Srila Prabhupada says no, these false acharyas are the most dangerous elements in human society who are already residents of narakah. "Gurusuh narah matih narakah sah," and Srila Prabhupada told us this verse means, anyone who thinks acharyas are ordinary mundane men who fall down are ALREADY residents of narakah (hell).

Anyway, this also proves that Lokanath swami is not a nice guy at all, his program has been -- to have us Prabhupadanugas banned, beaten, sued and killed for promoting the worship of Srila Prabhupada. And he is still pouring gasoline on the fire he and his pals started. Even the local police here say to me, "These people claim to be vegetarians, but they want to drink your blood." Even the police are astonished, "What kind of people are these fellows, that they want to drink your blood and kill a Hare Krishna"?

Well this is nothing new at all, there have always been deviants who wanted to drink the blood of the Vaishnavas, just look at the stories in the Vedas of how Vaishnavas are attacked by such demoniac elements regularly? Anyway, this is good, they are down to de facto admitting, they have no siddhanta to back up their claim that acharyas are often debauchees. They can only promote their idea that acharyas are deviants by goonda process, threats, banning, beating, suing, and -- killing. Hanuman Croatia of course thinks that Bhakti Vikas swami is one of the good guys, because he is always kissing the feet of Lokanatha swami and the other member of the illicit sex acharya's program.

Same problem we are having with Swarup Hebel types. Well sure, Jayadvaita swami says that in ISKCON their gurus are poking everyone in the house, the women, the men, the children -- and maybe the family goat, therefore -- he is a nice guy? Hee hee! These guys need to find a Vedic dictionary are re-read what it is to be a nice guy and what is not! 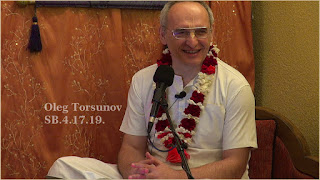