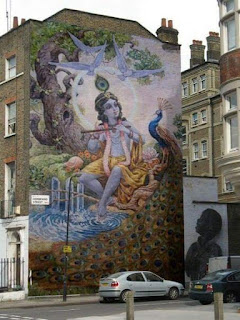 Srila Visvanatha Cakravarti Thakura was born in 1674 in the Nadiya district of West Bengal. He had two brothers: Sri Ramabhadra Cakravarti and Sri Raghunatha Cakravarti. Visvanatha received initiation from Sri Krsnacarana Cakravarti, in whose house he lived for a long time and wrote many books.

In Nadiya, Visvanatha studied the scriptures and Sanskrit grammar, poetry, and rhetoric. Even as a boy in school, he was a formidable scholar who could defeat anyone in logic and debate. Although indifferent to family life, Visvanatha married at a young age at his father's request. He was married only a short time, however, renouncing his wife and home to live in Vrndavana. Although his family and friends often tried to bring Visvanatha back home, he was fixed in his determination to serve Lord Krsna in the Lord's transcendental earthly abode.

In Vrndavana, Visvanatha took up residence in the former cottage (bhajana–kuir) of Srila Krsnadasa Gosvami, on the bank of the sacred lake known as Radha Kunda. Living there with a disciple of Krsnadasa's named Mukunda Dasa, Visvanatha carefully studied the books of Rupa Gosvami, Sanatana Gosvami, and other Gosvamis and later wrote commentaries on many of these books. Srila Visvanatha Cakravarti also wrote important commentaries on Srimad-Bhagavatam and Bhagavad-gita.

Srila Prabhupada, in his own purports, often quotes the commentaries of Visvanatha. Srila Prabhupada often mentioned that he had been inspired in his own spiritual life by Visvanatha's commentary on Bhagavad-gita, Chapter 2, verse 41, where Visvanatha Cakravarti writes that the disciple must accept as his life and soul the order of the spiritual master.

Srila Visvanatha Cakravarti Thakura is the author of Sri Gurvastakam, "Eight Prayers Glorifying the Spiritual Master." Following the practice set by Srila Prabhupada, devotees in all ISKCON temples sing these prayers each morning at mangala-arati, the first worship ceremony of the day.
Srila Visvanatha Cakravarti's most famous disciple was Srila Baladeva Vidyabhusana. When brahmana scholars in Jaipur challenged the validity of Lord Caitanya's movement, Visvanatha, the leader of Lord Caitanya's followers at the time, was too old to make the journey and debate the challengers, so he sent Baladeva in his place. By the dictation of Lord Krsna, Baladeva wrote the Govinda-bhasya commentary on the Vedanta-sutra and defeated the skeptics.
Posted by krishna1008 at 9:12 PM