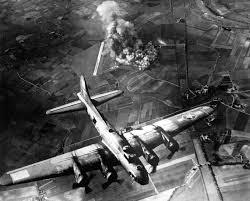 This is the way to fix ISKCON?

[PADA: OK Europe and especially Germany was burnt to ashes under Hitler's regime. Not sure how that qualifies him to be a kshatriya? A kshatriya is a person who protects his people from harm, he does not create a situation where his own people will be carpet bombed for years together. Nor does this have any basis in kshatriya dharma.]

Here we see Prabhupada describe Hitler as fighting very valiantly. Let's look at the dictionary definition of the word valiant:

1. possessing or acting with bravery or boldness : courageous <valiant soldiers>

2. marked by, exhibiting, or carried out with courage or determination : heroic <valiant feats>

Sounds just like the Lords description of a ksatriya [pious fighting warrior] in the Bhagavad-gita.

Heroism, power, determination, resourcefulness, courage in battle, generosity, and leadership are the qualities of work for the kṣatriyas.

Prabhupada said Hitler fought very valiantly but was vanquished. Still we should also understand that his brave fight against the Zionist bankers and their demoniac red terror of communism has helped the sankirtana movement.

[PADA: Ravana also fought very valiantly, but in the end he lost. This is called illusion. So why is this a such a great idea? Communism was also never going to take over the West in the late 1930s, they did not have the resources or well equipped army etc. Russia was struggling with famines, internal problems, and so on in the 1930s, it was not in a strong position to start wars. To say Hitler defeated communism is simply false, he was mainly fighting the West. And a big chunk of Germany was handed over to the communists after the war.

When we went on harinama in Germany in the 1970s, an old woman who was probably a child during WW II, was screaming at us, and so I asked a German devotee to translate. She was saying, "If the Fuhrer was still here, you people would all be in jail."

Great, we'd all be in jail, that's really helping us out! I don't think the Hitler lover's club realizes that things could be a whole lot worse for us under a dictatorship than our Western democratic process. That woman is most likely correct, we'd all be in jail under a guy like Hitler. Dictators are famous for repressing religions.

By the way, Hitler did not defeat the bankers, the Zionists, or anyone else, he was defeated plain and simple. We also cannot find any evidence Mukunda's program has defeated anyone either, he has not had anyone sued or prosecuted even for stealing a paper clip -- for the past 30 years. Mukunda did send out photos of an atom bomb going off to all sorts of people a few years ago, which made them laugh their socks off, this guy is thinking sending us a photo of an a-bomb is going to fix ISKCON?]

If Prabhupada's movement had more devotees like Sulocana dasa prabhu who had a brave heart like Hitler and actually fought against the Zionist agents in the Krishna Consciousness movement instead of surrendering blindly and ever so obediently to them, then perhaps we might now have a powerful Krishna Consciousness Preaching Movement with self-sufficient farm communities that could give real shelter to the suffering people of the world!

[PADA: I knew Sulochana for years and he never mentioned fighting the Zionists. He was mainly going after Kirtanananda, who was a Baptist by birth. Nor can anyone can take Israel and / or the alleged Zionists to court anyway? This is a major pipe dream illusion. We are going to sue the Zionists? Sulochana did a lot of reading about the Gaudiya Matha and their process of making false gurus, he was not reading anything about Hitler at all.

This is simply a means of covering up the real problem, which is bogus gurus. Sulochana wanted us to fight the Gaudiya Matha's false guru ideas, and our GBC leaders who were adopting these ideas, and not start a false flag fight with a particular race of people, which cannot be won in any event. Nor does Srila Prabhupada want us to start a war with a particular race.

Nor would any USA court even accept a case to prove that a particular race was guilty of ISKCON's crimes, nor could a particular race be put into jail etc. The Gaudiya Matha had false gurus after 1936, and none of them were Zionists. To say we need people like Hitler to fix our problems is going to sound very nutty to anyone with a sane mind in any event.]

Hitler was not Krishna conscious. "Do not be deviated..."

Prabhupada: ...If one is not Kṛṣṇa conscious, he's nothing but animal. So if other small animals praise him, "Oh, you are..." This Gandhi or Indira Gandhi or, and the Hitler and... What is the value? He's a big animal, that's all.

[PADA: This is pretty amazing really, we need to be more like Hitler, and Srila Prabhupada says he is like an insect who simply dies in a short time, and in the quote above he says "only animals" will praise him. Hee hee, that makes Mukunda and his idiot troopers like Prahlad "small animals." Mukunda is saying we need to be -- small animals? Yes, Srila Prabhupada says small animals will glorify big animals. So these neo-nazi people are simply trying to take us down with them, to the animal platform.]

Prabhupada: "Churchill was there. He has gone. Hitler was there. They are coming and going like so many insects. Napoleon was there. Who cares for them? We are licking up their so-called activities: "Oh, Napoleon was so great. Gandhi was so great." And what he has done? The dog dancing. Who can understand that unless one is Kṛṣṇa conscious?"

So this conquering of other countries was not like the Napoleon conqueror or Hitler conqueror. No. As it will be evident from the character of Mahārāja Parīkṣit, the idea was to keep the whole world Kṛṣṇa conscious.

Regarding Hitler, so Hitler may be good man or bad man, so what does he help to our Krishna Consciousness movement? But it is a fact that much propaganda was made against him, that much I know, and the Britishers are first-class propagandists. And I have heard that his officers did everything without informing him, just like in our ISKCON there are so many false things:
"Prabhupada said this, Prabhupada said that.'' But we have nothing to do with Hitler in our Krishna Consciousness. Do not be deviated by such ideas..."

[PADA: Don't be deviated by such ideas. We have nothing to do with Hitler. And if Hitler's officers were doing everything without telling Hitler, then the officers were mainly waging the war independently -- and not so much Hitler?]

When are the politicians going to take training how to become free from the wrappings of illusion? So they are in illusion, in darkness. What they can do? Futile attempt. Therefore all plans are failure. So many Hitler, so many Gandhi, so many Churchill, they came and...

[PADA: People like Hitler are trapped in the wrappings of illusion. Whatever they are doing is thus a futile endeavor, a useless waste of human life. These people come and go like insects, their plans are futile, their lives are futile, because they are missing the main component of -- linking to Krishna.]

Vidura Mahatma das: Excellent quotes. Really puts to rest all of this ridiculous Hitler prajalpa. People take things out of context too much. Why doesn't Mukunda share quotes like the ones below? He seems to be aware of every single place Srila Prabhupada mentions Hitler.

"Another impediment is prajalpa, unnecessary talking. When we mix with a few friends, we immediately begin unnecessary talking, sounding just like croaking toads. If we must talk, we should talk about the Kṛṣṇa consciousness movement. Those outside of the Kṛṣṇa consciousness movement are interested in reading heaps of newspapers, magazines and novels, solving crossword puzzles and doing many other nonsensical things.

In this fashion people simply waste their valuable time and energy. In the Western countries old men, retired from active life, play cards, fish, watch television and debate about useless socio-political schemes. All these and other frivolous activities are included in the prajalpa category. Intelligent persons interested in Kṛṣṇa consciousness should never take part in such activities."

[PADA: Prajalpa, is right! Another devotee wrote to say these guys are sitting around talking about Hitler while making gorilla grunting noises, thinking this will impress others that they are big important men, but they are wasting their lives in foolishness. Prahlad thinks that all this Hitler prajalpa foolishness is good because it "is getting lots of video hits." Bikini contest videos are also getting lots of hits?

Anyway, we hope this helps.

We also recall that Srila Prabhupada wrote in his Bhagavatam that we should not discuss Hitler, that is a sign he wanted this to be very clear to all of his followers AND for all time. We are simply amazed that some people are trying to defy these orders using the good name of Sulochana. This is hi-jacking his name in spades. He never wanted to be associated with this agenda. ys pd]