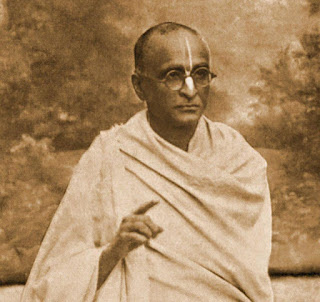 "When I was seventy years old I decided, “Now I must do and execute the order of my Guru Maharaja. And thus this movement was started in 1965 from New York. And I was not very much hopeful because it is very difficult task, just opposite the European and Western culture. I came... When I first came, I had no money. So I got a free passage through some Indian steam navigation company. So I came by ship. So when I was on the ship at Boston port, Commonwealth port, I was thinking that “I have come here. I do not know what is the purpose because how the people will accept this movement? They are differently educated, and as soon as I will say, ’So, my dear sir, you have to give up meat-eating and illicit sex and no intoxication and gambling,’ they will say, ’Please go home.’” (laughter)

Because that was the experience of one of my Godbrother. He went to London, and he had the opportunity to talk with one big man, Marquis of Zetland. Marquis of Zetland was formerly governor of Bengal. At that time I was student. He was Scotsman, and I was student of the Scottish Churches’ College. So he came to see our college, and he was standing in front of me in the second-year class. So he was very nice, good gentleman. So he proposed to my Godbrother, Whether you can make me a brahmana? So my Godbrother proposed, “Yes, we can make anyone brahmana provided you follow this principle: no illicit sex, no intoxication, no meat-eating, no gambling.” So that Lord Zetland immediately replied, “Impossible.”
(laughter)

So I was thinking that, “I will propose something which is impossible. Anyway, let me try.”

Prabhupada: So now, by the grace of Krishna and Caitanya Mahaprabhu and in the presence of my Guru Maharaja, you are so nice boys and girls. So in front of Caitanya Mahaprabhu you are chanting Hare Krishna mantra, and you are taking part in it very seriously.So my Guru Maharaja will be very, very much pleased upon you and bless you with all benefits.

So he wanted this, and he is not... (Srila Prabhupada chokes up with tears then continues)
It is not that he is dead and gone. That is not spiritual understanding. Even ordinary living being, he does not die. Na hanyate hanyamane sarire. And what to speak of such exalted, authorized personality like Bhaktisiddhanta.He is seeing. I never feel that I am alone. Of course, when I came to your country without any friend, without any means...Practically, just like a vagabond I came.

But I had full faith that “My Guru Maharaja is with me.” I never lost this faith, and that is fact. There are two words, vani and vapuh. Vani means words, and vapuh means this physical body. So vani is more important than the vapuh. Vapuh will be finished. This is material body. It will be finished. That is the nature. But if we keep to the vani, to the words of spiritual master, then we remain very fixed up. It doesn’t matter. Just like Bhagavad-gita. It was spoken five thousand years ago.

But if you keep to the words of Krishna, then it is always fresh and guiding. Not that because Arjuna personally listened to Krishna about the instruction of Bhagavad-gita, therefore he knew it. That is not the fact. If you accept Bhagavad-gita as it is, then you should know that Krishna is present before you in His words in the Bhagavad-gita. This is called spiritual realization."

... We have got this human form of life. It will be finished, as the cats’and dogs’ life also finished. But if we try through the guru and Vaishnava, then, we can achieve in this life the full success, not failure like cats’ and dogs’ life. That is the opportunity. So as far as possible, we are trying to lead you in this line, and you kindly follow. Then your life will be successful. That is the mission of Sri Caitanya Mahaprabhu. He wanted to deliver these fallen souls, the conditioned souls rotting in this material world. So Krishna Himself... Krishna comes Himself, Krishna sends His devotees, Krishna comes as devotee— just to execute this mission to reclaim the fallen souls from the clutches of illusory energy, material world. Thank you very much." (End)
It was amazing to see the humility, the love and the dedication Srila Prabhupada had for his Guru Maharaja. He even said he sent us to help him with the mission. I heard him say the same thing in the last year when his Godbrothers and devotees would come and offer praise. Srila Prabhupada always humbly bowed his head and gave credit to his guru Maharaja and the devotees. We are so fortunate to have such a sweet spiritual master! May we all follow him back home and be with Them again.
One of the best things about being on the Sri Sri Radha Damodar Traveling Sankirtan Party was that when Srila Prabhupada was in America we could go see him and get very enlivened.
Srila Prabhupada arrived in Atlanta on February 28th 1975. When he first took Darshan of Sri Sri Goura Nitai he was very ecstatic and pleased. He told us he was pleased that the devotees were doing such nice Deity worship. He said he started most of the worship in most of the temples, but the devotees started it in Atlanta. He started talking about how Lord Krsna asked us to surrender; but Lord Chaitanya and Lord Nityananda are so merciful they didn't even ask us to surrender. When he said that his voice choked up.
We got to meet Srila Prabhupada in his room. We all wore matching vests and Prabhupada hats that were made by Minaketana Ramdas. He also made one for Srila Prabhupada and he offered it to him personally. The hat was too small so it sat high on Srila Prabhupada's head. It looked funny and we all laughed heartily except for Minaketana Ramdas. He was devastated! But since Srila Prabhupada was smiling nicely and chuckling it eased his pain and we were in bliss.
In the room Srila Prabhupada told us that if we remained brahmachari's we would go back to Godhead; but if we got married it would be a 50% chance.
Srila Prabhupada told us if we studied the 7th Chapter of the Bhagavad Gita we would be good preachers because everything is in that chapter.
Srila Prabhupada went on morning walks and talked about scientific preaching a lot. Swarupa Damodar Swami was there learning so much from Srila Prabhupada as we all were.
A devotee asked Srila Prabhupada what pleases him the most. Srila Prabhupada replied, "If you develop your love for Krsna, that will please me the most."
All the devotees loved that answer.
Hoping this meets you well and Happy in Krsna Consciousness

Your eternal friend and servant
Posted by krishna1008 at 5:38 AM