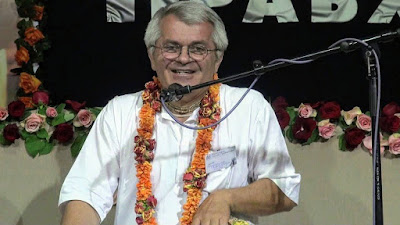 Today I listened to the recording from the pujari meeting in Moscow. And one senior devotee, his name is Parjanya Maharaj, he was initiated by Vishnupada (Harikesha Swami) at one time, and now he has a new guru, he received re-initiation from Niranjana Swami, and so on.

This Parjanya is a distinguished talker. He says that the ISKCON temple at Kuusinen is the best temple in the world, the highest standard there. Even a fool person can see photos from Mayapur or videos from Mayapur where Pancha-tattva is worshiped, and to compare it with the “high” standards in Moscow one concludes that Parjanya has problems with perceiving reality.

The high standard in understanding Parjanya:

1) When the pujaris receive money every month for their service Krishna.

2) When in the room where the Deities are located, there are unsanitary conditions: cockroaches, mice, rats, bugs, and other vermin are running right through the Deities.

3) When the Deities are in the basement.

4) When the pujaris do not know how to properly worship the Divine and perform daily seva-aparadhi, careless and inattentive service.

5) When in the kitchen of the Deities work various homosexuals.

6) When Tulasi perish each time due to the negligence of the pujari.

7) When the pujaris spend useless yajnas who do not work in Kali-yuga, and simply earn money by deceiving people and hiding behind an authoritative tradition.

8) When the pujari worship the demigods (there is a Shiva-ling in the temple in Moscow, Siva is worshiped).

9) When the pujaris conduct the yajna to the demigods.

10) When pujaris are hypocrites and liars, pretending that he understands the topic of Deity worship, but in reality is simply tied to material life.

[PADA: Yep, this has been a big problem all along, the deity worship has been badly impacted by the GBC's gurus' deviations. Of course, deviation number one was offering bhogha to conditioned souls. Then, many / most of the poojaris were exiled from ISKCON and the new wave of poojaris simply did not know the proper standards and so on and so forth.
OK some of these "new poojaris" were homosexuals, and there were also reports of some male poojaris being sexually aggressive with various female poojaris, trying to tempt them into sexual relations. We even heard of a full on sexual activity taking place in the deities room in one instance, but who really knows how many problems there really are when the GBC keeps a tight lid on their scandals.
And in general, temples that formerly had hundreds of devotees to worship the deity were reduced to having maybe twenty people, and they just could not keep up the opulent standards that had happened previously. This is why a number of people have concluded the GBC overall are atheists, who else would disturb and destroy the worship of Krishna deity except, the asura class?
Then again Hansadutta moved big marble Krishna deities to live in a shoddy shed, Ireland's deities were stolen by the GBC and moved to the UK, and so on, thus the list of these horrible aparadhas to the deities is almost endless at this point. The only good news is, more people are being made aware of this problem and so hopefully it can be fixed later on. ys pd]