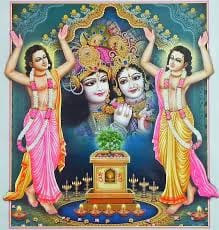 Gaura Purnima is the auspicious appearance day of Sri Chaitanya Mahaprabhu (who is also known as Gauranga due to His golden complexion), and this year we are celebrating the 533rd anniversary of His appearance on March 21, 2019. This festival also marks the beginning of the New Year for Gaudiya Vaishnavas.

The Supreme Lord Sri Krishna appeared as Sri Chaitanya Mahaprabhu to establish Sankirtana (chanting of the Holy Names) – the Yuga Dharma for this age of Kali. He appeared on Phalguni Purnima, the full moon day in the month of Phalguna, (Feb-March) in the year 1486 AD (1407 Shakabda) at Sridham Mayapura as the son of Sri Jagannath Mishra and Srimati Sachidevi. His parents named him Nimai since he was born under a nimba (neem) tree in the courtyard of His paternal house. His appearance day is celebrated as Gaura Purnima.


The celebration begins in the evening with a pallakki utsava of Sri Sri Nitai Gauranga (Lord Chaitanya Mahaprabhu and Lord Nityananda). The utsava Deities are taken out in a procession in a pallakki bedecked with flowers. Devotees perform maha sankirtana to please the Supreme Lord. As everyone joins in the sankirtana, the Hare Krishna maha mantra resounds in every corner of the temple.

After the procession, the Deities of Nitai Gauranga receive a grand abhisheka. Their Lordships are first bathed with panchamrita and then with panchagavya followed by various fruit juices. Devotees chant prayers from the Brahma-samhita, glorifying the Lord. A grand arati is performed to the accompaniment of the Gaura Arati song composed by Srila Bhaktivinoda Thakura. After the arati, the Deities are bathed with sanctified water from 108 kalashas while the devotees chant the Purusha Sukta prayers. Their Lordships then receive pushpa vrishti (showering of flowers) and a special offering of 56 dishes (chappan bhog).

Next follows a shayana arati when all the assembled devotees glorify Sri Chaitanya Mahaprabhu by singing Sri Sachitanaya Ashtakam that describes His transcendental form, qualities and activities. The program concludes with the shayana pallakki utsava followed by flower holi.

On this day, devotees fast till moonrise and break their fast by taking anukalpa feast (made from non-grains). On the following day, they offer a special feast to the Lord which is called Jagannath Mishra Feast, named after Sri Chaitanya Mahaprabhu’s father, who arranged a grand feast to celebrate the birth of his son.

The Supreme Lord Sri Krishna appeared as Sri Chaitanya Mahaprabhu to establish Sankirtana Movement – the yuga dharma for this age of Kali. He appeared on the full moon day in the month of Phalguna in the year 1486 AD at Sridham Mayapura as the son of Sri Jagannath Mishra and Srimati Sachidevi.

In the revealed scriptures Lord Krsna was predicted to appear as Golden Avatara (incarnation) as Sri Chaitanya Mahaprabhu to propound and propagate the congregational chanting of Holy name of the Lord “Hare Krsna Hare Krsna Krsna Krsna Hare Hare / Hare Rama Hare Rama Rama Rama Hare Hare“ -- in order to counteract the contaminating influence of this debilitating and despicable age of quarrel and hypocrisy and attain the spiritual perfection.

In this age there is an ocean of faults in action which incurs irredeemable reaction. People are excessively and exceedingly engrossed in ameliorating material condition of life by neglecting their spiritual elevation and enrichment. Maya is ruling unchallenged and unthreatened due to forgetfulness of God.

In this deplorable and disgraceful condition, the only rescue and resort is the unfathomable and unbounded mercy of Lord Chaitanya which makes this abominable age worship-able, and transforms inauspicious to auspicious, joyless to joyful, unfortunate to fortunate and launching frontal attack on the headquarters of Maya.

Lord Chaitanya Mercy is a special privilege in this age which empowered and inspired us to triumphantly march out from prison house of material existence on the path of Sankirtana which leads to highest spiritual planet Goloka Vrindavan.

All glories to the moons who are devotees of the principal moon, Lord Caitanyacandra! Their bright moonshine illuminates the entire universe.

In this verse we find the moon described as candra-gaṇa, which is plural in number. This indicates that there are many moons. In the Bhagavad-gītā the Lord says, nakṣatrāṇām ahaṁ śaśī: "Among the stars, I am the moon." (Bg. 10.21) All the stars are like the moon. Western astronomers consider the stars to be suns, but Vedic astronomers, following the Vedic scriptures, consider them moons. The sun has the ability to shine powerfully, and the moons reflect the sunshine and therefore look brilliant. In Caitanya-caritāmṛta Kṛṣṇa is described to be like the sun. The supreme powerful is the Supreme Personality of Godhead Śrī Kṛṣṇa, or Lord Śrī Caitanya Mahāprabhu, and His devotees are also bright and illuminating because they reflect the supreme sun. The Caitanya-caritāmṛta (Madhya 22.31) states: