[PADA: One of our spies overheard some of the GBC's folks apparently arguing that making female diksha gurus will "break the back of ISKCON in India, because none of the bona fide sampradayas will accept." Probably true.

Of course making illicit sex with men, women and children gurus is acceptable? Hee hee! Notice that Dhanurdar swami is still listed among the GBC's consultants and managers, after they said he would be banned for his role in child abuse. These guys never seem to do what they say they will.

Anyway, yes, their female diksha gurus won't be accepted widely, true dat. They already have empty temples from their bogus male gurus, how will bogus women gurus help? And if their men gurus are falling down, getting sick and dying from taking sins, why would souls in women's bodies fare any better?

Its rare for women to be parampara acharyas in any event. There could be exceptions, according to Krishna's desire. Thus if a pure devotee female took the post of diksha guru, which she would only do by Krishna's order, that is another thing. That is not the case here.

By your permission, a small fallen person like me would want to
address some of the points from Praghosa Prabhu.

POINT #1:  Issue of Suniti is not applicable today because it is from satyuga
---------------------
*  Almost all the incidences mentioned in Bhagavatam are not from Kali yuga where the yuga dharma was different and where in general women were not allowed to perform austerities etc..

*  The logic that Praghosa Prabhu puts, advances us to believe that most of the instructions and ideals of Srimad Bhagavatam are not meant for Kali yuga

* Moreover, in the verse itself, SB 4.12.32, there is no clue of any gurus mentioned. However, SP specifically brings this point up in the purport. Why would he do that, if he doesn't want us to follow the example.

* Thus, even if Suniti could have been initiated, she could not have been able to give initiation as she was a woman. Same holds true for today.

* In kaliyuga, in ISKCON we follow pancharatrika process for initiation as mentioned by SP himself.

"Therefore this diksa is offered according to Pancaratrika-vidhi.
That is recommended in this age." (BG 7.3, Bombay, Mar 29, 1971)

* Thus, our explanation is based on sastras, not presuppositions;
while the above proposal was based on a presuppositon that clashes
with sastras and tradition.

* One doesn't need to be guru for going back to Godhead or be a pure devotee.

* One only needs to perform devotional service prominent of which is hearing and chanting.

* Thus, how women's not being guru prohibits them from going back to God head?

* Everyone has right to go back to Godhead.

* No one has right to become guru; guruship is not a matter of right.

* As soon as one aspires to become guru, one is immediately unqualified for the service of diksa-guru. This applies equally to all.

* Thus, When sastras and Prabhupada prohibit women from becoming guru,
they are not depriving them their right to serve and go back to God head. 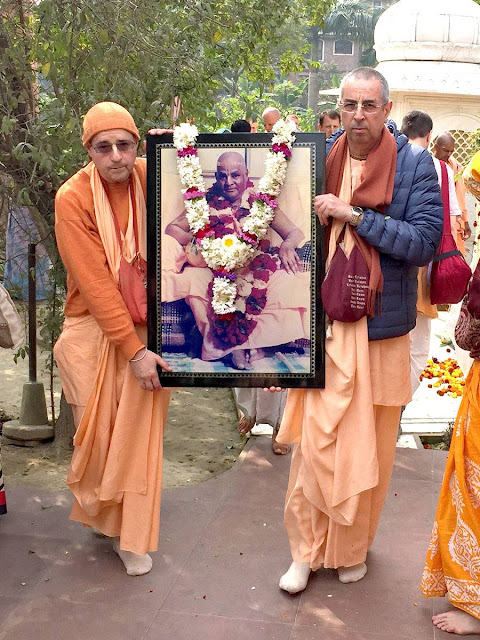 Gaura Govinda Maharaja's people said he was taking their sins as a diksha guru, ok because he is as good as Jesus. Nope, GGM is not another Jesus, this is way beyond normal egotism of the mundane people. The mundane people know they are not able to absorb sins like Jesus, because they have the basic quality of humility and respect for actual saints. Now we are going to have women taking sins like Jesus? That is going to fix this mess? Hee hee! As Hrdayananda said in 1986, the Mad Acharya's Disease is now becoming an epidemic. ys pd