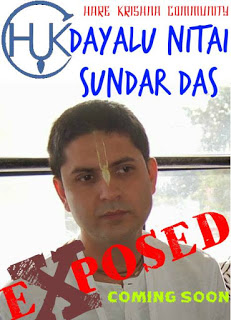 PADA: The bad news is, and what concerns me right now is -- that a friend of the Prahlad / Mukunda / HKC Jaipur group has sent me a death threat, he says he is going to chop my head off. The good news is, this confirms what we have said about this group the whole time, they are violent goondas who want to have Vaishnavas assassinated. Or what? The other bad news for them is, I am not worried one iota about having my head chopped off, it needs replacing anyway.

I have thus already given (A) this e-mail to the local police, along with (B) associated HKC Jaipur's pal's Prahlad's message saying he is going to send my photo to GBC goons to have me killed; along with (C) another HKC friendly person who says he wanted to break my bones (I have a photo of this person at the HKC programs); along with (D) many messages from HKC people saying we were wrong and even demoniac to stop their favorite child molesting guru's program, etc.

They also keep saying PADA is a liar, ooops, and so the HKC folks say GBC defenders like Bhakta Das and Hari Sauri are speaking the truth -- thus the HKC folks repeatedly sent me a link to go and listen to Bhakta das and Hari Sauri. Right! We need to listen to the main henchmen of the molester messiahs program. Yep, molester messiahs ki jaya sir! Why is the HKC still in bed with Radhanath's cheer leaders?

The one thing that connects all these violent people together is -- that they are all associated in one way or other with the HKC Jaipur group. If this goes forward, it will be exposed and reported to the India CBI. I'd like to know if Jaipur HKC wants me to go ahead or what they want to do.

Anyway, this is actually VERY good news, it means we were right all along to say that these people are still in bed with the molester messiah's program, and the associated GBC goonda's "threats of violence and murders" agenda. Another devotee, from the Jaipur "Gita Books" program also wrote that Dayalu's program is making huge 35 page written attacks on his program to send out in public, constantly causing problems for other Vaishnavas, don't these guys have something better to do in life?

And so this "Gita Books" program devotee basically asks, why are the HKC folks sitting around all day long plotting and scheming against other devotees, and writing huge web sites and 35 page attack papers on everyone else, including the Prabhupadanugas? Even this Gita Books devotee says that Dayalu's program is creating major mayhem even for the ritviks, and its making the whole ritviks program look foolish to everyone else. Why is Dayalu always trying to discredit the ritviks?

Did we forget to mention that the Mukunda and Prahlad program -- that the HKC folks sent me links to -- appears to be a closet Hitler fan club, and this is upsetting to most devotees, and they are making more videos about the Zionists / Hitler all the time? Why are these folks meditating on Hitler all the time?

Anyway, death threats is not the way forward for the Vaishnava community, its that simple. And so its surprising that these guys are still living in New Vrndavana land in the 1980s -- thinking death threats is the way to go ahead. Well sorry, they have to catch up to modern times. And if they cannot realize this is wrong, they need to be monitored by the law enforcement agencies over there in India. We also have a report that Prem Prayojana prabhu has been getting some threats of violence from other competition groups the Narayana Maharaja camp, this seems to be a trend and tendency ... and its needs to be nipped. ys pd