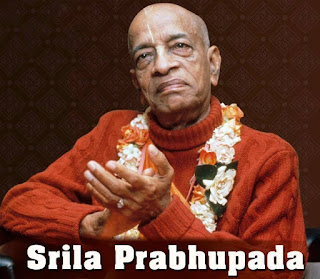 The EuroGBC has presented Srila Bhaktivinoda Thakura as a spiritual seeker who did not fully embrace Gaudiya Vaisnavism in his early life.

"The historical context in which Bhaktivinoda Thakur commenced his spiritual quest can be portrayed as a time of serious encounter and conflict between Hindu traditionalists and a Westernized and secularized Bengalis intelligentsia. Because of his studies in and appreciation for Western ideologies, Bhaktivinoda Thakur experienced profound religious doubts and did not take for granted the philosophical and theological doctrines of Vaisnavism. " (EuroGBC statement)

However this vision of Bhaktivinoda Thakura is by no means universally accepted. In fact, it may be argued that such a view is detrimental to one's spiritual life. Rupa Vilasa Prabhu argues that he is a nitya-siddha who descended from the spiritual world. Those with clouded vision misunderstand the early life of Bhaktivinoda Thakura, assuming him to be a conditioned soul.


"Srila Bhaktivinoda Ṭhakura's life can easily be misrepresented and misunderstood if subjected to a mundane, scholarly approach. At the outset he appears to be a typical Bengali intellectual, a product of the British educational system and Calcutta literary scene and a student of European philosophers. Nineteenth century Calcutta was the epicenter of the cultural, literary and religious life of India. The Ṭhakura appears in the midst of this period of historic ferment in the guise of a typical, British-educated, Bengali Babu.

He seems to dabble in various philosophies and to eventually take up the study of Kṛṣṇa consciousness out of intellectual curiosity. He then appears to have been transformed by spiritual association into an ardent apologist of Gauḍīya Vaiṣṇavism in reaction to its misrepresentation by others, both foreign and native, and to take up the propagation of Kṛṣṇa consciousness, gradually achieving a state of elevated spiritual consciousness. Although this view of Śrīla Bhaktivinoda Ṭhākura is superficial and far removed from a true understanding of his spiritual significance, it may nevertheless appear to have some merit. Ultimately it does not, but unfortunately some scholars present him in just such a superficial and uncomprehending manner....

.....When a spiritual personality comes to the material world for the salvation of others, there is bound to be bewilderment on the part of those whose vision remains clouded by the material world, as to who and what he is.

Thus, "to rescue the true view from confusion" we must know that Śrīla Bhaktivinoda Ṭhākura is nitya-siddha, an eternally realized associate of the Supreme Lord, who descended from the spiritual world to assist Lord Caitanya in establishing His mission. Whatever external appearances, forms and figures are present in his life, he was never a conditioned soul of this world. This assurance we have from our ācāryas.

He was a member of Kṛṣṇa's inner circle in Goloka-Vṛndāvana, the supreme spiritual planet of the spiritual world, and he has come to rescue us from confusion. The inner life of a nitya-siddha devotee can never be fully understood, but the aim of a biographical work of this sort is to attempt to delve into the inner life and mood of a great soul, so as to afford inspiration and direction to those who have set out, or are yet to set out, on the path back to Godhead: life's only truly great journey. The inner life of a mahātmā can be traced out, especially in his writings, in which his personal ecstacies are revealed, so far as words can describe them.

This was especially true in the case of Srila Bhaktivinoda Ṭhakura, who left detailed descriptions of the spiritual process and his personal experience of the Transcendental Reality Himself, Sri Kṛṣṇa. Great souls may exhibit ordinary seeming activities, but they are not to be misunderstood because of this. "

[PADA: Right, a pure devotee might appear to take the post of a mundane person, and even some of the Goswamis were supposed to have been government servants prior to their being Goswamis. However it is all speculation to say that they were influenced by mundane illusion at any point, since sometimes a pure devotee / nitya siddha appears to be a mundane person so that he can infiltrate himself into that society at that time. Of course never mind nitya siddha devotees, even us ordinary aspiring devotees sometimes take mundane posts, jobs and positions, its sometimes what a devotee does, but that does not mean the devotee identifies with that mundane position.

And! That does not mean the devotee has become illusioned.

Rupa Vilas is correct to say that we should not think great acharyas are subject to illusion, and / or falling for the principles of mundane education etc. Of course after 1986 we had some temporary help from Rupa Vilas writing these types of things to help our Prabhupadnauga process, but when we told him Satsvarupa Das Goswami was a ring leader of supporting the idea that acharyas are often debauchees, Rupa Vilas was very disappointed that we were attacking his "old friend Satsvarupa." Well, we have to go the extra mile and not allow anyone to say pure devotees are mundane people, even it its our old friends.

The only good news is that the Satsvarupa lineage now fully admits their acharyas are often debauchees, and they are at least honest enough to say that they think God's successors are often fallen fools. They are thus preaching that acharyas are fallen souls all along, and so the Rupa vilas' party should not attack simply one instance where they do that, since they do that in tens of thousands of instances. We have to address their entire false idea that pure devotees are often fallen and subject to illusion. ys pd]

There are many kinds of religion in the world, and among all of them the highest development of religion is the congregational chanting of the Supreme Lord's divine names. Of this there is no doubt. Alas! When will that day come when all greatly fortunate souls in countries such as England, France, Russia, Prussia and America will take up banners, kettle drums, mridangas and karatalas and thus cause the ecstatic waves of Hari Nama Kirtana and the singing of Sri Chaitanya Mahaprabhu's Holy Name to rise in the streets of their towns and cities? O when will that day come when pure and transcendental Krishna prema (love of God) will be the only religion of all souls and all tiny sectarian religions will meet in the unlimited and universal religion of devotional service to Krishna, as rivers merge into the great ocean? O when will that day come?"