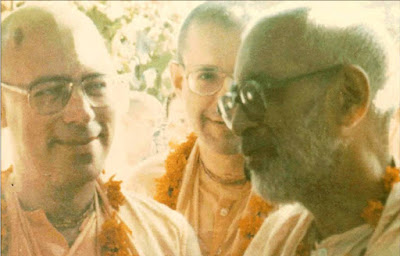 As within, many corruptors have risen like venomous snakes, so from without do these distracting and dangerous forces attempt to contaminate and cover pure ISKCON. One such effort was B.V. Narayana Swami, who stepped into the glorious light of Srila Prabhupada, but only proved to be a dark shadow. This counterfeit guru presented the deep aspects of the Sankirtan Movement, just as a villain lures with a precious jewel.

[PADA: Wait a minute! BV Narayana Maharaja (BVNM) did not "step into the glorious light of Srila Prabhupada" on his own, rather he was invited into ISKCON by the leaders, and pushed into a seat of authority, especially by folks like Tamal Krishna swami, Giriraja Swami, Sivarama Swami, Satsvarupa Das Goswami, Indradyumna swami, and many others. He was acting as their shiksha guru, consultant, rasika guru and adviser. He did not stroll into ISKCON on his own, he was pushed in by the leaders.

And Satsvarupa mentions that BVNM was helping the GBC put together their "Guru Reform." In fact BVNM is mentioned in the GBC's 1984 "Guru Reform Notebook" which was circulated by a number of ISKCON leaders. Later on BVNM was giving "rasika classes" to many of these GBC gurus, and numerous rank and file ISKCON people were also invited to attend his lectures and many did, in addition BVNM was regularly speaking at ISKCON temples and programs at the invite of these leaders. This is also how Sridhara Maharaja became prominent, he too was invited in.]

ISKCON is unique in Srila Prabhupada's adaptation, and holds the full potency of the Sankirtan Movement, with all potential of raga-bhakti. According to all spiritual paths, deeper states may develop naturally and individually, and is not necessary for there to be a certain all-pervading spiritual master, such as B.V. Narayana Swami pretended to be.

[PADA: OK but that is what these GBC gurus were all preaching -- that you need go outside of ISKCON to take shelter of a "rasika guru." And this is still going on, a number of GBC gurus have associations with the Babajis etc.]

Indeed, there are deeper level / mood devotees who can transmit the raga-levels and discuss esoteric topics and literatures, but through B.V. Narayana's own personal character and minimal effect, surely he did not actually possess this profound spiritual state, and thus could not ever even transmit it. However, Srila Prabhupada in fact achieved all the glory of the world, through his pure spontaneous love, and therefore the seed of raga-bhakti is always within the ISKCON mission.

[PADA: OK so why do the leaders of ISKCON keep saying we need to go outside of ISKCON to take shelter of folks like Sridhara Maharaja, Narayana Maharaja, BV and BP Puri Maharajas, the Radha Kunda Babajis, various psychics, various astrologers, various new age advisers, the Sterling program, and so on and so forth?]

ISKCON is the great doorway in which humanity would step into the light of Krishna Consciousness, ultimately leading to the sweet mellows of pure-bhakti. Srila Prabhupada formed this spiritual and societal structure in his last twelve fruitful years while present on this planet. ISKCON, as an organization, is a perfectly pure formula for the Sankirtan Movement; thus he explained the teachings of Bhagavad-Gita, and developed a process ofvaidhi-bhakti, along with varna-ashram, as a perfect basis and system.

[PADA: The GBC flat out does not agree with this, they are acting like pied pipers taking people off to all sorts of outside authorities.]

Once Srila Prabhupada opened the Sankirtan door into modern culture, there actually was no need for a successor.

[PADA: OK wait a minute, most Gaudiya Matha folks, and their allies like Narayana Maharaja, the GBC, Rocana, Torben Nielsen, Ajit Krishna, and hundreds of similar others say -- there has to be a successor, of course these groups usually tend to choose debauchees as their successors to God.]

Along with the original 'eleven' usurpers and the present guru-system, B.V. Narayana Swami tried to place himself next in line of succession to Srila Prabhupada, and began to initiate bewildered persons. Instead of sharing the intimate aspects of Sri Chaitanya's movement, B.V. Narayana posed himself, and played the part of modern guru, while sequentially claiming that Srila Prabhupada was insufficient - so was the ruin of this forged successor.

[PADA: That is what the GBC said. They started out in 1978 saying that Srila Prabhupada has given us insufficient knowledge and so we need to "consult" with Sridhara Maharaja and others.]

The mood and writings of the previous Sankirtan line is the pure fountain of raganuga-bhakti, and is always there for ISKCON devotees to bathe in. Yet, pure existent relishment may be found in the ISKCON movement itself as established by Srila Prabhupada, and it is certainly exhibiting the great Sankirtan-lila. ISKCON and the devotional world must not be polluted by the contaminated mixings of B.V. Narayana Swami and his corrupt staging of raganuga-bhakti.

[PADA: In 1993 the GBC voted to remove Tamal because his association with Narayana Maharaja was causing a mass exodus of people over to BVNM's camp. Gaura Govinda Maharaja stood up and defended keeping Tamal, he said we need to keep Tamal (the pied piper who was draining ISKCON)? Of course Tamal is also the founder father of the illicit sex acharyas program. Why do we need to keep this person? And now the GBC has buried Tamal in a samadhi, so they worship the pied piper himself, even now.

So the same people who created this exodus are now worshiped. Does this make any sense? Anyway, the result of the GBC sending ISKCON off to outside authority is -- pollution and contamination of the teachings of Prabhupada. Correct. ys pd]