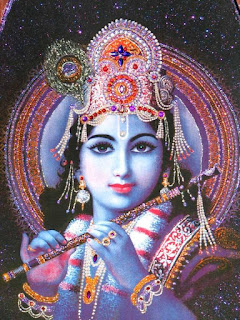 Please accept my dandavats at Your lotus feet.
All glories to Your Divine Grace!

Defying time You entered the lives of those who aged quickly by dint of their minds. How dangerous it is to travel on mental plane, tormented by the aging body, victimized by ones own speculations, echoing what was speculated 40 years ago. One can only regret that the freshness of the youth is wasted on children, so quickly turning into the senility of old age.

You started this movement with the young ones, knowing their madness, but also their seeking spirit. You kindled the inspiration and initiative and simultaneously You brushed away our speculations with a playful smile. You gave us reality and removed the illusion.

But alas, in Your absence the need for distinction returns, this time packaged into seniority demanding respect and recognition. We don't seek anymore, we are turning into walking grave yards where our false egos were once upon buried, digging them out again.

We turned your dynamic ISKCON into empty halls of lost fame where the sound of parliamentary deputees fills the empty corridors. Title carriers speaking to themselves, while the general public is heading for hell.

[PADA: Pretty much what Lokanath swami said in 1988, ISKCON has become a ghost town, where did all the people go? And the answer is simple, the citizens of ISKCON were driven out, shunned, harassed, sometimes beaten and killed, for the crime of not respecting "the new gurus," never mind every single one of the original 11 so-called gurus either fell down, got very sick, or died.

While these guru guys were fighting over who would be the next big king of the castle, the castle itself was burning to ashes -- which is why Srila Prabhupada said that the false gurus of the Gaudiya Matha are "a fire in the Matha." And the poor general public is thus hardly benefiting from the movement of Lord Chaitanya, because for starters the movement has lost so much credibility and lost its luster, its not attractive even to the old time stalwart devotees, never mind the new people are wondering what went wrong here? Who burnt the house down?]

[PADA: Right, the GBC and their followers always boast how much progress they are making, but their temples are being made into ghost towns in the meantime.]

Our hearts don't beat anymore the same speed they used to, exited by the change we seek to achieve. You, the ultimate revolutionary, showed us how to die for what we believe in, to sacrifices our bodies for the mission You gave. What an inspiring thought, to live for something so wonderful and worthwhile. What a wonderful life You gave me Srila Prabhupada!

But alas, from the bottom of our growing bellies, we echo the humanistic and altruistic sounds of those we came to oppose. How many changed! How many of Your glorified fighting heroes became senile title carriers in an institution you never intended to start!

[PADA: Hee hee, right, the GBC guru program is full of "senile title carriers." I like that! And the institution they control has become corrupted. As one ex-guru told me, "we became the very thing we hated before we joined the movement, a corrupt religion."]

Seeing even those I used to admire to change into unrecognizable forms I am alarmed. Sure, I am not anymore the eighteen years old brahmacary who used to run passionately on the street with Your books in his hands. Now I distribute few and breathe heavily. But what does it matter, I am still breathing. I still want to change it all, seeing the dull monotone lifeless demons administered to those who should dance in bliss.

[PADA: Yes, where is the dynamic harinama and college preaching programs we once had? Now the Brooklyn temple wants to move to Queens, "because that is where the Hindu's money is." No one wants to move near a college to start a big college preaching program? The good news is that at least some of our younger Prabhupadanugas are going to start a college program on the East coast as soon as they can get all their people assembled there. There is some symptom of life here and there, but its not very widespread. Then again the old fossil GBC is suing our people because they do not want us to preach anywhere at all.]

[PADA: A lot of people have said that these leaders simply went back to their old attachments, Kirtanananda was always trying to upstage Srila Prabhupada and make his suit and tie if not "brown Christian robes" program; Jayatirtha went back to LSD; Hrdayananda went back to college; Tamal wanted to get rid of the householders, and he really went full scale attack on that after 1977; Ramesvara wanted to be a married businessman and he fulfilled that desire; Bhavananda wanted his sexual escapades and he went back to that process; Harikesh was always doubtful and that manifested big time; Satsvarupa was always a hermit type with little empathy for others and he went into that mode; Jayapataka wanted to be recognized as a big saint and he almost pulled that off -- until he went a step too far by suing other vaishnavas; Vipramukhya and Danavir crammed the whole GBC 11 program down everyone's throat then sort of wandered off into the sunset -- after they ruined thousands of others lives; Hansadutta wanted to be the biggest gangster and he was; and so forth. Basically all of these guys are going down in the dust of time, their only accomplishment to their credit after 1977 was -- destroying their guru's mission. Of course who wants credit for that?]

I want always to remember You Srila Prabhupada how You danced, how powerfully you attacked the illusions of those who are praised only by fools and opportunists. We used to follow You, we used to oppose those whose boots we kiss today.

As the conditioned soul is rejuvenated by transcendetal message, instictivly molding it according to its material needs, I don't want to follow such fools, I refuse. I refuse to join the preachers of unconditional love and unity in stupidity. I revolt. I will not be institutionalised and compromised. I want to follow the chain of command based on reason and logic, not on dogma and personal cult.

As you didn't comply with the pseudo intellectuality of those who came to criticize You, I also refuse to be associated with those who want the kingdom of God without God. I see You Srila Prabhupada driving across the battlefield of this material world in Your chariot, driven by Krsna, the Supreme charioteer. The battle of Kurukshetra didn't ended yet. Now the bloodbath of that battle turned into a battle field of far larger scale, a global battle against stupidity and ignorance covering this world.

Our bodies will be removed automatically, no need of war. But our ignorance remains. And so the battle rages still with You as the supreme commander. Book by book written by You and distributed by us, another arrow is released to kill the ignorance of those who are confused.

Dear Srila Prabhupada, I saw humanists and dreamers being crushed by the wheels of invading tanks already. All the preachers of bodily universal love got shot. The real face of this world is a ghastly one. More death is coming. And so Your message, reaching far beyond birth and death, will be more appreciated when the material energy tightens its grip.

Your books will become more relevant for those whose heads are laying down on maya's guilottine. Now they walk proud submerged in their arrogance. Now only the most intelligent ones get a glimpse of Your wisdom. When pain truly arrives on the scene, more will start to listen.

[PADA: Very nice. Yep, the old fossil GBC are dying out, and they made ISKCON into a ghost town. That means its their bad karma, they will have to answer to ruining Krishna's movement in the courts of Yamaraja. ys pd]