Letter to Rocana from Sattvic dasa 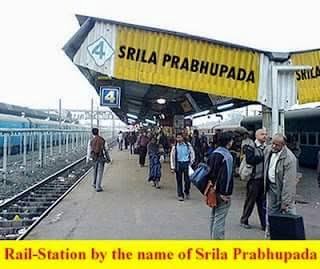 When we speak of the Sampradaya Sun we speak of he who is enlightening human society with transcendental knowledge or he who is the pride of the Sampradaya and I am sure Rochana is referring to His Divine Grace A. C. Bhaktivedanta Swami Prabhupada. Others (Gaudiya Math) May refer to Srila Bhaktisiddhanta Saraswati Goswami and still others may refer to their own Guru.

I am concerned With Srila Prabhupada .

What I cannot accept is why Rochana prabhu is so adamant in maintaining that the ritviks are wrong to the point that he does not even want to discuss or publish any articles that directly deals with the subject.

I am making an attempt to analyze this discrepancy.

The Sampradaya is the chain of disciplic succession. There are four Vaisnava Sampradays. Our is the Brahma Madhva Gaudiya Sampradaya coming down from Lord Brahma to the present day. Srila Prabhupada is the “current link”. Has he ceased to be the link after his physical departure? Not to my knowledge.

There are many gaps between one Acharya and the next sometime thousands of years or more. We have Srila Vyasadeva and then immediately the next one is Madhvacharya. How many years in between the two great souls? So what exactly is the link? It is the transcendental knowledge. Such Knowledge remains intact in its principle but may differ in some detail according to time, place and circumstance. As such Acharyas may differ somewhat in the application of the principles by adopting means that are suitable for preaching Krishna consciousness to the people of that particular time.

As long as the teachings of the current link remain valid we can conclude that he remains the Acharya. One of the objections to the ritvik system is how will the disciplic succession go on? How can it stop with Srila Prabhupada? We need a living guru to connect us to the sampradaya etc.etc. This argument is by nature a faulty one.

First of all, no one can alter, add or subtract from Srila Prabhupada’s teachings. No GBC no sannyasi, no one for as long as Sri Krishna decides. Yes. Because the continuation of the Sampradaya is in His hands. Not in the hands of conditioned souls in the way of continuing a business or family or a dynasty of kings. These are all mundane considerations that have no place in Vaisnava culture.

How is Rochana Das obscuring the Sun of the Sampradaya? Srila Prabhupada?

It’s plain and simple. He is, by denying Srila Prabhupada’s position as the initiator spiritual master for his society, leaving the door open for ambitious people that somehow there is some chance to become a guru (including himself perhaps). Otherwise why such an animosity to a direct order of the Acharya? After all if Srila Prabhupada cannot initiate (posthumously as they insultingly call it) then someone has to take up that very important service.

Furthermore. In the same breath he criticizes all the gurus in Iskcon, the GBC etc. So who is left? Is that you Rochana prabhu? Or who else. Speculation is very dangerous. Replacing a conditioned souls with another conditioned soul thinking that maybe (keep your finger crossed) he will not fall down is an utterly foolish proposition. And I don’t leave it at that. Fall down does not only mean having sex. Disobeying the order of the spiritual master is also a fall down. By definition the all gamut of hypocrites who are now occupying (by force) positions within Srila Prabhupada’s Institution are fallen.

I don’t want to make this article a long one. My concern is that devotees who visit the Sampradaya Sun are also taken for a ride. Different degrees of ignorance is still ignorance.

Rochana Das is, has and will continue to obscure Srila Prabhupada by imposing speculations. There is a need for proper, honest distribution of information to safeguard the spiritual interest of countless souls who want shelter of Krishna. The mercy of Krishna cannot be obtained unless we take refuge at the lotus feet of a Bona-fide spiritual master. That Spiritual master is Srila Prabhupada not any self-deluded conditioned soul.

The Sampradaya will continue with Srila Prabhupada as long as the Lord allows it. He will then make arrangements as He has done since time immemorial. We have to stop committing the sin of presumption thinking that we are more intelligent than our spiritual master.

I had only one morning walk with Srila Prabhupada. It was in 1976 in Mayapur, a pleasant January morning. We were only three of us and His Divine grace. It was Bhavananda, Tamal Krishna and me. Srila Prabhupada stopped in front of the main gate and stuck his cane on the ground. He looked in the sky and said with a very grave voice. “You cannot step over the head of the Spiritual Master”. He kept walking and said no more for the duration of the walk.

How many more time do we have to witness devotees stepping over the head of Srila Prabhupada? Tamal and Bhavananda went on doing just that and met with disaster both spiritual and material. You Rochana prabhu have to stop committing the same mistake and come to your senses otherwise your fate is sealed. Arrogance and over intelligence are not qualities of those who claim to be followers of Srila Prabhupada.

Let your Sampradaya Sun shine with the true teachings of Srila Prabhupada. He is the light of Iskcon and the eternal guide of any sincere seeker of transcendence. Give up this animosity to his order and bow down to his will.