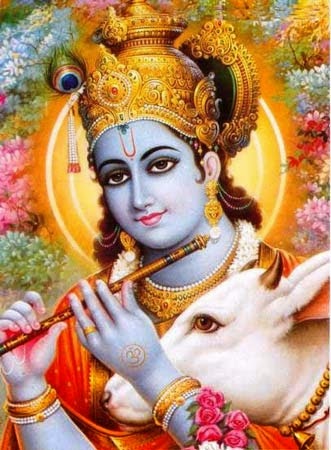 Nārāyaṇī eternally eats the remnants of the food of Caitanya Mahāprabhu. Śrīla Vṛndāvana dāsa Ṭhākura was born of her womb.

PURPORT
In the Gaura-gaṇoddeśa-dīpikā, a book written by Kavi-karṇapūra that describes all the associates of Śrī Caitanya Mahāprabhu and who they previously were, there is the following statement regarding Nārāyaṇī:
ambikāyāḥ svasā yāsīn
nāmnā śrīla-kilimbikā
kṛṣṇocchiṣṭaṁ prabhuñjānā
seyaṁ nārāyaṇī matā
When Lord Kṛṣṇa was a child, He was nursed by a woman named Ambikā, who had a younger sister named Kilimbikā. During the time of Lord Caitanya's incarnation, the same Kilimbikā used to eat the remnants of food left by Lord Śrī Caitanya Mahāprabhu. That Kilimbikā was Nārāyaṇī, who was a niece of Śrīvāsa Ṭhākura's. Later on, when she grew up and married, Śrīla Vṛndāvana dāsa Ṭhākura was born from her womb. A devotee of Lord Śrī Kṛṣṇa is celebrated in terms of devotional service rendered to the Lord; thus we know Śrīla Vṛndāvana dāsa Ṭhākura as the son of Nārāyaṇī. Śrīla Bhaktisiddhānta Sarasvatī Ṭhākura notes in this connection that there is no reference to his paternal ancestry because there is no need to understand it.
Books : Sri Caitanya-caritamrta - 1975 Edition : Cc. Adi-lila : Adi 8: The Author Receives the Orders of Krsna and Guru : Adi 8.41 : PURPORT :

Vrindavana dasa Thakura as the author of Sri Caitanya-Bhagavata

Vrindavana dasa as the reincarnation of Veda Vyasa

By the order and strength of Śrī Nityānanda Prabhu, Śrīla Vṛndāvana dāsa Ṭhākura has elaborately described in his Caitanya-maṅgala all that I have not.
Sri Caitanya-caritamrta - 1975 Edition : Cc. Adi-lila : Adi 17: The Pastimes of Lord Caitanya Mahaprabhu in His Youth : Adi 17.330

O fools, just read Śrī Caitanya-maṅgala! By reading this book you can understand all the glories of Śrī Caitanya
Mahāprabhu.

As Vyāsadeva has compiled all the pastimes of Lord Kṛṣṇa in Śrīmad-Bhāgavatam, Ṭhākura Vṛndāvana dāsa has depicted the pastimes of Lord Caitanya.
Books : Sri Caitanya-caritamrta - 1975 Edition : Cc. Adi-lila : Adi 8: The Author Receives the Orders of Krsna and Guru : Adi 8.34


Srila Prabhupada explains the result and benefit of hearing Caitanya-Bhagavata

By reading Śrī Caitanya-maṅgala one can understand all the glories and truths of Lord Caitanya and Nityānanda and come to the ultimate conclusion of devotional service to Lord Kṛṣṇa.

PURPORT
Śrīmad-Bhagavatam is the authoritative reference book from which to understand devotional service, but because it is very elaborate, few men can understand its purpose. Śrīmad-Bhāgavatam is the original commentary on the Vedānta-sūtra, which is called nyāya-prasthāna. It was written to enable one to understand the Absolute Truth through infallible logic and argument, and therefore its natural commentary, Śrīmad-Bhāgavatam, is extremely elaborate. Professional reciters have created the impression that Śrīmad-Bhāgavatam deals only with Kṛṣṇa's rāsa-līlā, although Kṛṣṇa's rāsa-līlā is described only in the Tenth Canto (chapters 29-35). They have in this way presented Kṛṣṇa to the Western world as a great woman-hunter, and therefore we sometimes have to deal with such misconceptions in preaching. Another difficulty in understanding Śrīmad-Bhāgavatam is that the professional reciters have introduced bhāgavata-saptāha, or seven-day readings of the Bhāgavatam. They want to finish Śrīmad-Bhagavatam in a week, although it is so sublime that even one verse of Śrīmad-Bhāgavatam, if properly explained, cannot be completed in three months. Under these circumstances, it is a great aid for the common man to read Śrīla Vṛndāvana dāsa Ṭhākura's Caitanya-bhāgavata, for thus he can actually understand devotional service, Kṛṣṇa, Lord Caitanya and Nityānanda. Śrīla Rūpa Gosvāmī has said:
śruti-smṛti-purāṇādi-
pañcarātra-vidhiṁ vinā
aikāntikī harer bhaktir
utpātāyaiva kalpate

"Devotional service to the Lord that ignores the authorized Vedic scriptures like the Upaniṣads, Purāṇas, Nārada-pañcarātra, etc., is simply an unnecessary disturbance in society." Due to misunderstanding Śrīmad-Bhāgavatam, people are misled regarding the science of Kṛṣṇa. However, by reading Śrīla Vṛndāvana dāsa Ṭhākura's book one can very easily understand this science.
Sri Caitanya-caritamrta - 1975 Edition: Cc. Adi-lila  The Author Receives the Orders of Krsna and Guru : Adi 8.36

The subject matter of this book is so sublime that it appears that Śrī Caitanya Mahāprabhu has personally spoken through the writings of Śrī Vṛndāvana dāsa Ṭhākura.

PURPORT
Śrīla Sanātana Gosvāmī has written in his Hari-bhakti-vilāsa:
avaiṣṇava-mukhodgīrṇaṁ
pūtaṁ hari-kathāmṛtam
śravaṇaṁ naiva kartavyaṁ
sarpocchiṣṭaṁ yathā payaḥ
Transcendental literature that strictly follows the Vedic principles and the conclusion of the Purāṇas and pañcarātrika-vidhi can be written only by a pure devotee.
It is not possible for a common man to write books on bhakti, for his writings will not be effective. He may be a very great scholar and expert in presenting literature in flowery language, but this is not at all helpful in understanding transcendental literature. Even if transcendental literature is written in faulty language, it is acceptable if it is written by a devotee, whereas so-called transcendental literature written by a mundane scholar, even if it is a very highly polished literary presentation, cannot be accepted. The secret in a devotee's writing is that when he writes about the pastimes of the Lord, the Lord helps him; he does not write himself. As stated in the Bhagavad-gītā (10.10), dadāmi buddhi-yogaṁ taṁ yena mām upayānti te. Since a devotee writes in service to the Lord, the Lord from within gives him so much intelligence that he sits down near the Lord and goes on writing books. KṛṣṇadāsaKavirāja Gosvāmī confirms that what VṛndāvanadāsaṬhākura wrote was actually spoken by Lord CaitanyaMahāprabhu, and he simply repeated it. The same holds true for Śrī Caitanya-caritāmṛta.KṛṣṇadāsaKavirāja Gosvāmī wrote Śrī Caitanya-caritāmṛta in his old age, in an invalid condition, but it is such a sublime scripture that Śrīla Bhaktisiddhānta Sarasvatī Gosvāmī Mahārāja used to say, "The time will come when the people of the world will learn Bengali to read Śrī Caitanya-caritāmṛta." We are trying to present Śrī Caitanya-caritāmṛta in English and do not know how successful it will be, but if one reads the original Caitanya-caritāmṛta in Bengali he will relish increasing ecstasy in devotional service.
Books : Sri Caitanya-caritamrta - 1975 Edition : Cc. Adi-lila : Adi 8: The Author Receives the Orders of Krsna and Guru : Adi 8.39

Vrindavan Das’s mother, Narayani
Vrindavan Das was born on the Krishna-dvadashi of the month of Vaishakh in 1429 of the Shaka era (1507 AD). Some say he was born in Mamgachi in the Nabadwip area, others say his birthplace was in Kumarahatta. His father was Vaikunthanatha Vipra, who originally came from Sylhet (Sylhet), his mother Narayani Devi. Narayani was the daughter of Srivasa Pandit’s elder brother, Shrinalina Pandit. Kavi Karnapura has also mentioned her name in his Gaura-ganoddesha-dipika:
ambikayah svasa yasin namna shrila-kilimbika
krishnocchishtam prabhuïjana seyam narayani mata
Kilimbika, who used to eat Krishna’s remnants, was the younger sister of Krishna’s nurse Ambika (Srivasa’s wife, Malini). In Mahaprabhu’s lila, she became Narayani.
Narayani also achieved fame because she received Gaurasundara’s mercy when he gave her his remnants. When the Lord displayed his divine form in the Mahaprakasha in Srivasa Angan, Narayani was only a small child of four, but the Lord made her intoxicated with the ecstasy of prema. Whether born in Mamagachi or in Kumarahatta, Vrindavan Das later lived in the village of Denuria, within the Matreshvara precinct of Burdwan district. Thus Denuria is considered to be his Shripata. He spent some of his childhood with his mother in Mamagachi, at the home of his maternal grandparents where Narayani was married. Vrindavan Das’s Gaura-Nitai deities are still worshiped at the Mamagachi home. When his father died, he and his mother moved to Srivasa’s house where he received Mahaprabhu’s special blessings.

Just as Vyasadeva compiled Lord Krishna’s pastimes in Srimad Bhagavatam, Thakur Vrindavan Das depicted Lord Chaitanya’s pastimes. His Chaitanya Mangala annihilates all misfortune. From it, I learned the wonders of Lord Chaitanya and Nityananda and came to know all the most subtle doctrines of devotional service to Krishna. Vrindavan Das Thakur has summarized the essence of the teachings of the Srimad Bhagavatam in his Chaitanya Mangala. If even a Muslim or an atheist should listen to Chaitanya Mangala, he immediately becomes a great Vaishnava. An ordinary human being could not have composed such a sublime work; Lord Chaitanya himself has spoken through the mouth of Vrindavan Das. I offer millions of obeisances unto the lotus feet of Vrindavan Das Thakur who has delivered the entire universe through his book. He was born in the womb of Narayani who eternally enjoys Sri Chaitanya’s remnants. How wonderful is his description of the activites of the Lord, simply by hearing which the three worlds have become sanctified! (Chaitanya Charitamrita 1.8.34-42)

Vrindavan Das became so absorbed in the description of Nityananda Prabhu’s lila that he did not elaborately relate all of Mahaprabhu’s activities, only summarizing them in abbreviated form. Krishnadas then elaborated on these undescribed activities in his Chaitanya Charitamrita.
Vrindavan Das the authorized biographer of Sri Chaitanya Mahaprabhu and equal to Srila Vyasadeva. He has described the Lord’s pastimes in such a way as to make them sweeter and sweeter. I shall try as far as possible to fill in the accounts he left out out of fear of excessively enlarging his book. (Chaitanya Charitamrita 1.13.48-9)

Vrindavan Das described primarily Mahaprabhu’s early activities such as his pastimes as a student, his childhood, his chastisement of the Qazi, his departure from Nabadwip, as well as some aspects of his life in Puri. Vrindavan Das Thakur demonstrated infinite mercy on the fallen souls by warning them:
eta parihare-o je papi ninda kare

Even after being told how objectionable it is, if someone still blasphemes the Vaishnavas, then I will kick him in the head.

These same words are repeated in the Adi, Madhya and Antya-khandas of the Chaitanya Bhagavat. Some foolish and arrogant persons misunderstand such statements and criticize Vrindavan Das for having made them. Such criticism leads them into the mud of offensiveness. In this connection, the remarks of Srila Bhaktisiddhanta Saraswati Goswami Thakur, the founder of the Sri Chaitanya Math and all the Gaudiya Maths, are well worth studying: “‘I am ready to kick the heads of those envious and hellish persons who blaspheme Nityananda Prabhu, if by so doing I will be able to forever prevent them from repeating their attempts to show disrespect for the Supreme Lord. Not only that, but if by so doing I can bring about a slear conception of the truth, I will be performing them the greatest service.’

“So says Vrindavan Das, the incarnation of Vyasa and acharya of the Vaishnava faith. If even a single fleck of dust should fall from his foot on the head of a sinful blasphemer, then that person will be blessed and all his sinful conditioning will inevitably be eradicated. In words which embody the Goddess of Learning and a flood of pure devotion, the Thakur reveals compassion for even the most atheistic blasphemer with the unswerving faith appropriate to a servant of Nityananda Prabhu, the supreme guru. He tells them that though they should be the object of indifference due to their foolishness, nevertheless, because of their ignorance of the truth of Nityananda, their insistence on rushing headlong on the path to hell, and their reluctance to act in their own real self-interest, he and other compassionate Vaishnavas like him who practice and preach the Lord’s doctrines unselfishly and disinterestedly act for their welfare. The compassion which is manifested in Vrindavan Das’s statement is beyond the comprehension of those who have no understanding of what is truly in their own self interest. Anyone who follows in the footsteps of Vrindavan Das, the incarnation of Vyasa, and both practices and preaches the Vaishnava religion is always engaged in an effort to bring about the ultimate well-being of everyone. Though he may make a superficial show of wishing to punish the enemies of the Lord, in fact he harbors a compassion toward them which knows no limit.”

Vrindavan Das Thakur’s disappearance day is the Krishna Dashami of Vaishakh. There is some dispute the exact year of his disappearance which was likely 1511 Shaka (1589 AD).