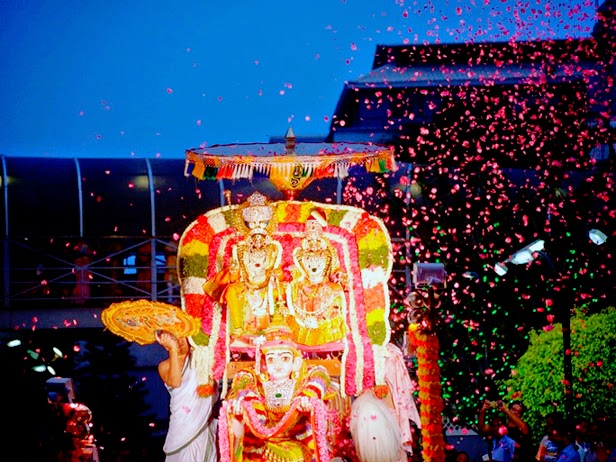 Satyabhama, one of Krishna’s wives when He became a prince in the city, became jealous of another one who had a parijata flower from the heavenly planets. Krishna promised Satyabhama a whole parijata tree.

At the same time, Krishna was informed by a messenger of a demon named Bhaumasura who had kidnapped 16,100 princesses from around the universe. He decided to rescue the princesses, and to get the parijata flower in the same trip.

He called for His carrier Garuda, a great transcendental bird who usually carries Him in His four-armed form of Vishnu. Garuda arrived, and, with Satyabhama accompanying Him, Krishna flew off to rescue the princesses first.

Here we see Him attacking the army of Bhaumasura. Garuda fought also, tormenting the elephants with his talons and beak. After a great battle, Krishna killed Bhaumasura and released the princesses.

Upon seeing His beauty, all of the 16,100 princesses fell in love with Krishna and they wanted to marry Him. Actually, in that culture, rules regarding the purity of women were so strict that these girls, having been kidnapped, were unmarriageable.

But Krishna is transcendental to such rules, and He knew of the love in their hearts, so He simply expanded Himself into 16,100 forms and married them all Himself.

But first, after arranging for their travel to His city of Dwaraka, Krishna took Satyabhama on another ride up to the heavenly planets where He let her choose her own parijata tree. The demigods, so possessive of their position, forgot that Krishna is the Supreme Personality of Godhead. They attacked to defend their tree, but after a good skirmish, Krishna defeated them and they offered obeisances and surrendered their parijata tree.
Posted by krishna1008 at 3:50 PM