Bombay vs Bangalore "Comes To An End"

The High Court on Thursday dismissed an appeal by Mumbai Iskcon, seeking the ownership of the Hare Krishna Hills on West of Chord Road here. Hearing the appeal by Prasannatma Das and others, followers of Mumbai Iskcon, Justice Anand Byra Reddy upheld the lower court order, which had in 2009 dismissed the claim of ownership by Iskcon Mumbai and observed that the Mumbai group had no locus standi to claim ownership of the Bengaluru centre.

They had sought that they be given control of Iskcon, Bengaluru and declared rightful owners of Hare Krishna Hills, popularly known as Iskcon temple. The court also allowed Madhu Pandita Das to continue as the head of Iskcon, Bengaluru. With this, the long legal battle since the late 1990s between the two Iskcon groups has come to an end.

[PADA: This is very important for us because we need to establish -- with documents -- that Srila Prabhupada is the factual acharya of ISKCON -- legally. Many of these documents were hidden, and had to be collected, printed and distributed by PADA's editor in the 1980s. This would include: -- The 1977 will (which we busted out of a guru's safe); The letters; In particular the July 9th 1977 letter; The May 28th appointment tape audio and transcript; Many quotes from various Srila Prabhupada sources on how the acharyas must be pure and not debauchees, and so on and so forth.

And this "evidence" was eventually submitted into the courts of India by Madhu Pandit das  -- and that means Srila Prabhupada's documents are now part of an official court record -- not only in the lower courts but even the Supreme Court in Delhi. So this is an important issue for all Vaishnavas, we need to establish what the acharya actually wanted and intended for ISKCON, and that he did NOT intend for neophytes to pose as his successor acharyas. And this all needs to be documented and even submitted into court for a permanent record.

And even noways GBC guru groupies like HKC Jaipur's Dayalu Nitai aka Dharmesh Sharma, Rohit Sharma, Prahlad das etc. folks have made a huge web site complaining that PADA was using his "taxi driving job" money to buy food and clothes for Sulochana -- and we funded printing Sulochana's materials; And we kept visiting the local photocopy shop to print and liberate Srila Prabhupada's documents; And we bought a microfiche machine to read Srila Prabhupada's letters; And we printed and distributed these documents around the temples and to the devotees at festivals and so on. That in fact is how these documents became public, we made them public!

The GBC folks then and HKC folks today thus complain that PADA has been bogus for driving a taxi, ooops, except Jayanananda was driving a taxi and Srila Prabhupada approved? OK! They really do not care what our job is in fact, what they are really upset with is that we are liberating these documents, they wanted to shut Srila Prabhupada's documents down, hide and suppress these documents, and they almost did by killing one of us.

What these GBC guru and HKC folks essentially said all along is that we should NOT liberate ANYTHING from Srila Prabhupada words, instead, PADA should get a better karmi job than driving a taxi! Yep, the goal of life is to get a GOOD JOB. Who knew! PADA should work for IBM and not Fog City Cab! These people are more mundane than the karmis we worked with over the years, they never cared what job I had. Of course, our getting out the poison tapes really frosted all of these folks. Notice, they wanted me to STOP WORKING and thus STOP LIBERATING these documents, so that they could continue to HIDE these documents and keep them suppressed, because I would be working on getting a better job and not working on forwarding Srila Prabhupada's documents!

All this apparently because -- driving a taxi means some people are going out to buy a pizza, never mind all the prostitutes we shuttled around all the time! So, its better NOT to have ANY of these documents from Srila Prabhupada liberated. Thus, all these forces were always working combinedly to SUPPRESS the documents of Srila Prabhupada, sometimes using deadly force, and now all these people are all INFURIATED that his words were liberated.

And NOW we can see why! Even the courts agree with these documents. Jeepers, too bad ain't it! Sulochana said if we did not liberate these documents, they might not EVER be liberated, they might be lost forever. Yep, no wonder the GBC and their foolish HKC clones fought so hard to suppress all these documents, including, killing us, attacking our karmi job status and etc.

And when these documents went into court, that must have been like the last straw for these bogus gurus, which means Madhu Pandit has risked his life going into court against this mob. No wonder Madhu Pandit has so many opponents, the illicit sex acharyas program is always upset when they are exposed, especially in court. We are simply happy that these documents were not only liberated, they are now official court records, all this despite all our opponents trying to stamp us out. In sum, our lives are very temporary, Srila Prabhupada's words and documents are not.

PADA's blog readership is also way up compared to this time last year, apparently, there are lots of people who are interested in these documents as well. ys pd] 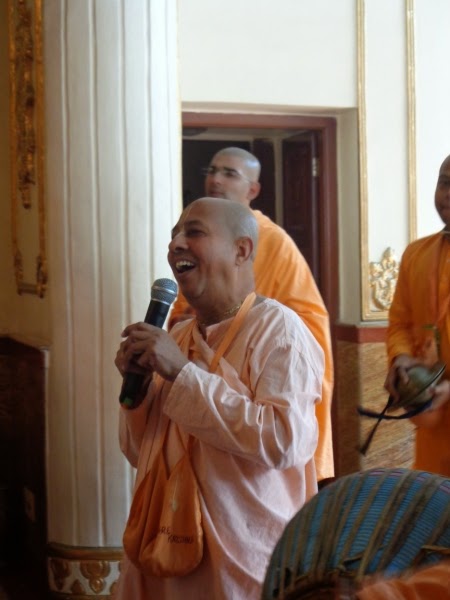 In the City Civil Court, Sri Amiya Vilas Swami and other followers of ISKCON Mumbai had claimed that they were the original founding members of ISKCON Bangalore Society (Regn. No. S.49/78-79). They had alleged that Sri Madhu Pandit Dasa and others had illegally taken over the society and were imposters. In an elaborate judgment running into several hundred pages, the Trial Court said that the claims of ISKCON Mumbai followers was legally untenable and dismissed their suit with costs.

Recently, Sri Amiya Vilas Swami once again sought to impaled himself as an additional appellant. Today, the Honourable High Court dismissed his application and the entire appeal itself on merits.
It may be recalled that ISKCON Mumbai is predominantly controlled by self-made Acharyas (not appointed by the Founder and Acharya of ISKCON, Srila Prabhupada). Although Srila Prabhupada had given a written institutional directive on how he shall continue to be the Acharya of the institution and his senior disciples shall act as Representative of the Acharya, soon after his passing away, his immediate followers usurped the position of Acharya in ISKCON.

This has led to much abuse of powers, financial and moral corruption which is continuing even to this day all over the world. When Sri Madhu Pandit Dasa and other members of ISKCON Bangalore questioned ISKCON leaders in 1999 on these matters, ISKCON Mumbai and their agents and followers have been trying to oust Sri Madhu Pandit Dasa and others from the well-known ISKCON temple on Hare Krishna Hill, Rajajinagar, Bangalore. Devotees of ISKCON Bangalore following the written directives of ISKCON Founder-Acharya, Srila Prabhupada, adheres to the directive that Srila Prabhupada continues to remain the sole initiating Guru and Acharya of ISKCON; whereas ISKCON Mumbai seeks to appoint successors to Srila Prabhupada, who will act as Acharyas based on a no-objection voting system.

Finding that their authority was disturbed, the self-made gurus of ISKCON resorted to all kinds of unethical, political means to disturb the yeoman services rendered by the devotees of ISKCON Bangalore. One such attempt was filing of this frivolous suit through some followers of ISKCON Mumbai falsely claiming to vest control of the ISKCON Bangalore society (regn no S.49/78-79). The Honourable High Court’s verdict today ensured that these frivolous claims come to a naught.