Over-endeavor for mundane things not good

SRILA PRABHUPADA: “Nobody should take to very hardship labor. The modern civilization has discovered severe types of dangerous industries, and laborers are attracted for high wages. But they should not accept such work. Then naturally there will be less capitalistic idea.

Because the laborer cooperates, therefore demoniac persons they take advantage and make unnecessarily increase of artificial demands of the body. Better one should be satisfied with agricultural produce than go into large cities to be engaged in industry. Peaceful life depending on agricultural produce can bring him real happiness and prosperity, not otherwise.

The more persons will be satisfied at their home, with home economics, not to go outside the home, that is peaceful life. In India, Mahatma Gandhi tried to organize villages in that way so that not to drag the people to the town. So peaceful atmosphere can be attained only when there is large scale village organization, actually village life. Not to borrow the ideas from the cities in the village life; poet Cooper said that country is made by God, and the cities and towns are made by man. So that is the distinction.”-Srila Prabhupada 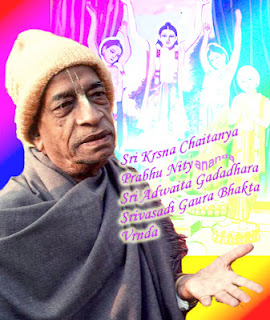