Rocana dasa aka SAMPRADAYA SUN: For now, we can only caution the reader to take the greatest possible care when consuming opinions on the topic of bhagavat-parampara.

[PADA: "Bhagavat parampara" means -- all us rank and file devotees who are not yet pure, or acharyas (ok us neophytes) should only act as shiksha gurus, i.e. agents, proxies, representatives or in sum -- fallible preachers. That is exactly what Rocana is doing himself, he is preaching "on behalf" of the "sampradaya acharya Srila Prabhupada." Rocana is thus promoting the bhagavata (shiksha) parampara process himself. Then, he contradicts himself saying we need to beware -- the ritviks are preaching on behalf, yet he is doing the same thing himself. Rocana is now arguing with -- Rocana?]

ROCANA: Such commentaries are becoming more and more prevalent on the Net today amongst the ISKCON community of devotees, most of them originating from Gaudiya branches that are not inline with Srila Prabhupada's teachings. Now the Rtvik-vadis have begun proliferating these arguments, putting even more devotees at risk of being contaminated. These arguments are imbued with a most deadly form of poison -- enviousness of the Sampradaya Acaryas. 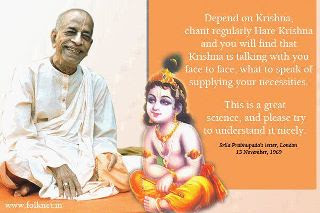