VBD: These kinds of ideas (that we fell from vaikuntha) are the basis of how ISKCON teaches about the cause, and therefore a solution to the cause, of samsara (repeated material existence of suffering, death, rebirth). This question is naturally developed: what is the natural solution to the cause? Answer: the opposite of the desire to enjoy like Krishna. What is that? The desire to serve Krishna’s enjoyment, with no desire to enjoy of our own. That’s what’s taught in ISKCON circles as the self-evident basis for bhakti-yoga, and, taught as the mentality that everyone needs to aspire for in order to attain heaven (Vaikuntha or Goloka). The problem is, it’s a complete concoction by Prabhupada.
[PADA: Just see how the bogus Gaudiya Matha and Narayana Maharaja idea is being promoted, that we fell from vaikuntha is "a concoction." Of course how do these people know how we got here, at all? And if we did not become envious of Krishna, then isn't Vrajabhumi saying we sort of landed here somehow or other (the Christian idea)? How did we get here then?]
VBD: There is never any shastric pramana offered for that theology, all they ever do is quote Prabhupada, as if his word alone is shastric pramana.
[PADA: Oh great, so Narayana Maharaja has made his people think they know shastra better than the pure devotees, hee hee! Again, what is shastra? Shastra is the speaking of a pure devotee, so if a pure devotee says we all originated with Krishna, he would know, we have no way of knowing.]
VBD: Prabhupada never presented shastric pramana for that ideology. For example the quote above from the purport to a verse from Caitanya Caritāmṛta — that’s commenting on a verse which actually, unbelievably, says that the origin of the jiva’s material existence has no original cause because the jiva has always been ignorant. That’s the nature of the jiva until attaining enlightenment, which I explain according to what shastra actually teaches on the topic at: Inconceivably We’re One, But We’re Not The same.
[PADA: OK, nitya enslaved really means -- it is a long time, time immemorial. That is not eternal time, it means we have been here for such a long time  -- it almost might as well have been an eternity for our teeny little selves. Notice VBD gives no explanation for how the souls became ignorant in the first place? The souls in the material world became ignorant by -- chance, by accident, by God being biased against some souls, she does not explain her point?]
VBD: Why did Prabhupada teach what he taught on the origin of the jiva?
[PADA: Because that is the only thing that makes sense, that we ourselves are the cause of our own fall down. Otherwise, the cause of our fall down would have been God Himself. Why would God cause His own children to fall down and suffer? VBD is making God out to be a tyrant who forces His children to suffer for no reason. She is teaching a sort of Christian idea, i.e. randomly (for no apparent cause), some souls are here because -- God randomly places some of us here (again for no specific cause), while He randomly places others in heaven. God is tossing dice around. Sorry, "the cause" is that we became envious of God, we caused our own failure by that envy.]
VBD: There have been various theories, a popular one is that he didn’t think the western mind could relate to Vedic thought on the origin of jiva from Brahman.
[PADA: Well if we all originated in brahman, how did we become envious of Krishna? Why would Krishna start off some of His children with Him in heaven, and then randomly toss others into brahman and thus into the material world, because that is all we can do from brahman? She gives no explanation: Why is God such a random actor, and thus a tyrant etc.? This is like Christianity, they ALSO say -- some folks started off in heaven with God, and some did not, its all random with no rhyme or reason, except -- God is biased against some of His children. He is a tyrant.]
VBD: I don’t believe that since his stated mission from the beginning was to get a following in the west so he could go back to India and make a big impact there with his western followers. Of course another popular theory among the ISKCON crowd is that Prabhupada was simply presenting the truth, although they often acknowledge that he contradicted himself by also teaching that the jivas never fall from Vaikuntha back into samsara, both in his books and elsewhere. In fact, in his books you rarely see him directly mention the idea of the jiva falling from Vaikuntha, most of those statements were either in recorded lectures and conversations, or letters.
[PADA: OK, but this does not explain the Narayana Maharaja idea -- that (randomly, from no apparent cause) some jivas start off  (a) in Vaikuntha and -- equally randomly -- some start off (b) in brahman, and have to fall here? How did we get here then? These people do not explain that. ys pd]
=================================== 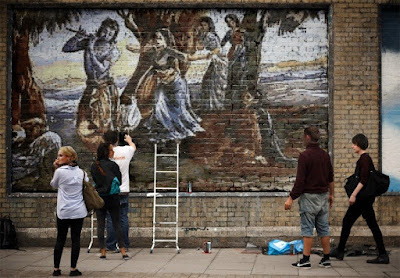