PD: No, the priest is not a pure devotee, he is at best a kanistha.

Chatur Bahu dasa: This is what you said. rtvik will only be a kanistha.

[PADA: First of all, most of our devotees are not able to follow the principles of a brahmana, so yes, most of them are not even up to the standards of kanistha at the present time. That is a fact.]

CB: Your response is contradictory to this statement and like being on a merri-go-round of double talk.

[PADA: I said most of our devotees are not up to the standard of following the brahmana standards and I am correct. Srila Prabhupada said that in January of 1977, most of his followers are not up to the kanistha level of following the brahmana standards, so suspend sannyasa and try to get people back to the basics. Its not double speak, its what he says.]

CB: Say what you mean, mean what you say.

[PADA: That is what he said, suspend sannyasa and that kanistha is a person who follows all the brahmana standards and this is barely going on, and instead his followers are basically making a laughing stock of the standards of brahmana life. And he was also right when he said most of his followers, actually over 95 percent is what he said, would go back to being hippies after he departs. How can hippies be divided into varnasrama? They cannot, they have to elevate themselves and they are not doing that, or barely doing that. Look at Niscintya dasa on TV recently doing a show on the effects of drugs, him being the candidate of drug users. I mean how can these people "lead" a wayward duck, let alone human society?]

CB: PD said(Srila Prabhupada said in January 1977 that a Kanistha is a devotee who follows all the principles of a brahmana.) your misunderstanding again!!! read the rest of the conversation that comes after your claim, instead of cherry picking to fulfill personal agenda

Hari-śauri: Where will we introduce the varnasrama system, then?

[PADA: First of all, there has to be a class of devotees who follow the strict standards of brahmana (bona fide kanistha adhikary) otherwise, there is no head to that society. Hippies cannot “manage” a beam bag throwing contest. And that is why ISKCON has fallen to its current position, it has barely any leadership of persons qualified to follow the system of brahmana life. Most of the devotees including the leaders are not following the strict standards of brahmana life, so they have — according to Srila Prabhupada — not yet come to the plane of kanistha. And we see that practically, most of the devotees are fallen from the standard of strict brahmana life, many of them went back to hippie life as he predicted, and they are “making a laughing stock” of the principles of brahmana life. So first of all, we need to have a head to the society, we do not have that at the present time. We have basically chaos and that is what the book Monkey On A Stick said on the cover, murder, madness and the Hare Krishnas, there has been chaos and everyone else seems to have noticed that except the devotees inside the chaos.

You need to have an organized group first of all with some sort of recognized managerial authority before you can divide up that society into anything at all. We have no organized anything right now, we have chaos, or worse anarchy, and a bunch of extreme neophytes who are back biting one another and there is no current organized institution to divide up into varnasrama categories. At least we have some kernel idea of doing varnasrama here at our ritvik temple in Sunnyvale, we have householders who support the temple and some full time brahmana priests types of devotees who are inside doing the pooja and so on, so we have at least some basic process of varnasrama going on, but it is not very developed. At least we have something going on in this regard, we are developing a society that can later be divided into varnas and asramas, but its only currently in seed form and its premature to expect a big societal development from such a small seed at the present time. Meanwhile, we need to follow the orders to get some sort of bahamana standards to head the situation, because without a head, there is no society at all, its chaos, as we have seen in ample examples. What society are we going to divide into categories, when there is no organized anything right now, there is no system of managing anything, the GBC are examples of antinomianism, and the outside critics are for the most part dis-organized and fighting among themselves like Afghan warlords. Its a chaotic free for all out there because people are not following, in case you have not noticed. ys pd 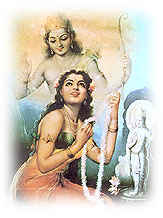