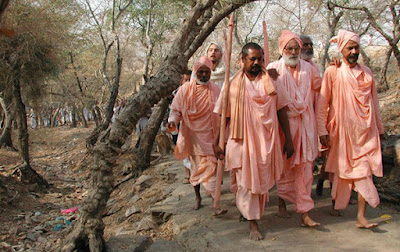 BV Tirtha to the left of NM

Didn't the sannyasa board selected by Srila Gurudeva publicly state that he should not act as the acharya of our sangha? Why is he still allowed to sit up on the stage, give hari katha as our main speaker, lead parikramas, claim to be the acharya of our sangha, or do anything else that represents Gurudeva? And shouldn't he be put into jail for some of his offenses to our sangha's women?

[PADA: This has been the trouble all along with Narayana Maharaja's program. He was told countless times how the GBC's "gurus" were deviating -- left, right and center. And yet NM just said we should tolerate all these "acharya deviations" and work with the leaders of the deviant guru program like Tamal -- apparently because these deviations are "not too many" and "not that bad." There is an "acceptable level of deviations" for acharyas?

Now it seems that a so-called swami and acharya in the Narayana Maharaja group is committing (criminal?) offenses to women, and this is known in their community, and yet nothing of substance is being done. And this is why some of them are asking "are we starting another bogus GBC program"? And they are asking the same question, why are we allowing deviants to pose as our acharyas?

Gaura Govinda Maharaja told me the same thing basically, sure, the GBC is making homosexuals and other deviants into their acharya messiahs. I know all about it! So what? Who cares? I am still going to work with them and support their regime anyway.

So the real problem here is that the GBC, Sridhara Maharaja, Narayana Maharaja, Gaura Govinda Maharaja etc all think that there are "acceptable levels of deviations" in Krishna's acharyas and successors. Sulochana said this is like thinking there are "acceptable levels of how many dog's stools we can put into the sweet rice." Hee hee! Sure our acharyas are deviating, but not that badly! Sure, the engine on our Boeing 737 is on fire, but its only a little fire!

And this process of "creeping deviations" is also how people become intoxication addicts. They start out thinking, OK I am only smoking a little bit in the crack pipe today, and this is an acceptable level because it is so small. Then, ooops, they increase the dosage, and so on and so forth.

How did you guess, as soon as we start thinking "little portions" of acharya deviation is ok, this leads to larger and larger and larger "acharya" deviations, just like crack addicts simply increase their dosage over time. Eventually, there is very little actual "acharya" behavior remaining, and there is mostly deviation behavior, but it all starts out by allowing in the first few steps of acharya deviations. Srila Prabhupada warned about watering things down, and this is an example of the phenomena.

Same exact problem we have had with the Sanat, Mukunda, Prahlad, Dayalu nitai HKC Jaipur people. First of all, members of this group told me NOT to have a lawyer get the legal rights to original books because "lawyers are all nonsense." So they (and many GBC folks) think a "little bit of book changes" is fine, we should not sue the GBC over that issue. Some of this group even thought they were going to "make a deal" with these GBC guru guys. Sorry, you folks never did make ANY deal with the GBC gurus, rather we were right to insist on NO book changes AT ALL. As we now see, "a little bit of book changes" has morphed into ALL kinds of book changes.

One person from the group, Sanat das, he did at least have enough mercy to ask us HOW MANY kids were being abused and how many victims were later committing suicide? These folks are obviously doing a "body count" to see how many bodies are under their child abuse army tank before they will finally admit there are "too many."

Of course that means this Sanat / Mukunda / Prahlad / Dayalu Nitai's HKC Jaipur group thinks that child abuse is some sort of numbers game, where some levels of abuse are acceptable as long as its "not too many." Why not just tell us, "how many" victims do you folks want to have abused? Then, we can let you know we when meet your quota? What kind of idiots make a "how many" quota on child abuse in the first place?

Since they want to know "how many," that means they think "many" is acceptable in the first place, because some levels of abuse are acceptable to this group.Then again the Narayana Maharaja group also said we should NOT attack the Tamal / Bhavananda group for the same reason "not too many people have been victimized" -- at least not yet. They want more victim's blood on their jackboots before they will act. Of course, when are any of these people EVER going to take ANY legal action to stop ANY of these crimes is the next question? OK its all bluff, i.e. victims have to suffer while they sit around bluffing.

So its the same thing Sulochana was saying about these people, they think "not too many" dog's stools in the sweet rice is fine. So everything is basically swell, what is the problem ... there are not too many guru deviations, not too many book changes, not too many child abuse cases ... oh really?

Too bad, we have not yet met their "deviation quota," so they want to allow it to continue. Is that what happened in the corrupt Catholic church, they thought their victim's "numbers quota" had not yet been met? And some of the GBC's leaders basically told us the same thing, its not that big of a problem. And now the NM folks seem to have the same sort of deviation quota system, this time applied to their acharya's deviations. Well he has not met our acharya's deviation quota yet, so we should allow him to continue. Yep, not too many dog's stools in the sweet rice, no problem!

Unfortunately, this is why there is still some alleged child abuse still going on in India, these same guys refuse to make any public protest, a lawsuit, or to do anything of substance whatever about it, i.e. they still think some levels of abuse is acceptable, even in the holy land. Worse, these guys won't even public protest burying a dead sexual predator deviant in Vrndavana, again, because "not too many" bogus people are being buried there. And now some NM people are arguing the NM successor guru is "very bad, but not quite that bad -- yet, so he should remain as the acharya of the sangha."

Whereas with the so-called mundane materialists or "karmis," they will say, NOPE! NO changes to the Bible are acceptable; NOT one case of child abuse is acceptable; NOT one woman should be manhandled or encouraged into sex by a swami or sannyasa; There are NO acceptable deviations in the Lord's successors; NO one should allow even one abuse victim to commit suicide -- if they can prevent it; NO messiahs take drugs, ever; NO one should imitate the messiahs of the Lord; and so on and so forth.

Well jeepers, is that why we had to get the "karmi" law enforcement to raid New Vrndavana, the karmis knew this was an unacceptable deviation. And this is also why the karmi law enforcement had to raid Hansadutta's farm, the Laguna Beach PDI business, sue ISKCON in Syracuse for fraud, arrest the New Vrndavana drug mules, and sue the GBC over child abuse, and so on and so forth. The karmis do not accept these deviations, while many "devotees" told us the whole while we should tolerate these deviations. "Its not that bad." Well how bad must it get then?

How did you guess, many of these same people were not only upset we got the "karmis" to help us get the legal right to the books, to get the molesting largely halted in the West, many of them are not happy the courts are being used to help establish that Srila Prabhupada is the acharya in the courts of India.

Anyway, what are acceptable levels of deviation for Krishna's guru successors? That is the first question. And the answer is: there should not be ANY, and that is even what even "karmis" believe. The karmis do not believe that sannyasas, monks, what to speak of messiahs or acharyas are deviants at all, period.

Narayana Maharaja program has now been infested with this same issue. "Well yes, he is an acharya, yes he is deviating, but he is NOT TOO BAD," as if acharyas are only partly rotten apples. Of course since some suggest this guy should be in jail, one wonders what kind of deviations we are talking about here? And yes, some have asked, "Where is Jadurani on all this mess"?

So this creeping deviation program, also sometimes called "mission drift" has to be halted, or ISKCON and now NM program will be known as the programs that allow deviants to pose as its messiahs. Yep, now Narayan Maharaja's program is having the same problem, because he endorsed the whole GBC idea that acharyas often deviate.

The good news is we are gathering people together who know this is all speculation, deviation, and an offense, to say that acharyas are deviating. We are thus winning and will win eventually, because for starters we have billions of karmi allies who know that NO acharya deviations are acceptable, NO child molesting is acceptable, NO re-writing the Bible is acceptable etc. ys pd
Posted by krishna1008 at 6:45 PM