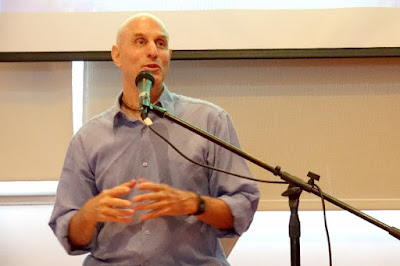 Founder of "Touchstone Training," where you will be "trained" in the Mahatma process that God's guru successors and messiahs are often deviants, debauchees, homosexuals, criminals, pornography addicts, sexual predators, dope heads, and so forth.

Of course Srila Prabhupada says -- anyone who claims that Krishna's successor gurus are deviants is a "resident of hell" (narakah). We simply cannot find any support for the GBC's / Mahatma's idea that Krishna's guru successors are often debauchees and deviants. What we can easily find in shastra are quotes saying -- that exponents of this "acharyas are often debauchees" idea are sinful fools heading for the lower regions (hell).

Then again, any average ten year old child walking down the street anywhere in the USA could defeat Mahatma in a guru tattva debate. If we ask the USA child "are God's gurus, successors and messiahs engaged in debauchee's behavior"? Any average child knows the answer right away, it is "nope."

Only Mahatma's GBC guru's clan claims that God's messiahs are often debauchees, because apparently they have less brains than any ten year old kid anywhere in the USA. There is also no sense to the idea that: (A) God is pure and perfect therefore (B) His successors are fools and debauchees.

This does not make any sense at all, even to a younger person. Nope, its simple common sense: (A) God is pure therefore (B) His successors are too! How many people think like Mahatma das, God is pure, therefore His successor is a debauchee, deviant, homosexual, pornography addict, criminal, sexual predator etc.?

Then again, if the "pure successor to God" is a deviant, that would make God Himself a deviant. And this is why some people ask PADA, "are these GBC guru guys actually God hating demons who want to make God look evil -- by His having evil successors"? Well, at least some think yes, they are.

Srila Prabhupada ALSO writes in the Nectar of Devotion that its very offensive to consider that pure devotees require atonements. OK pure devotees are transcendental to atonements, yet Mahatama's program has devised all sorts of contrived -- guru's censure, suspension, chastisement, atonement, removal, monitoring, and even excommunion -- "the new rules" for their pure devotee "God's successors."

And if God's pure devotee successors are often deviants. why would any regular person then bother to strive to become a pure devotee, since there is no point, because even the pure will (often!) fail? Why bother to become pure, if the pure are always failing? So this is another way of encouraging atheism, ... there are no actual pure devotees of God, its all false and failure. And this is mentioned in the Bhagavad Gita, the atheists tend to think religion is some sort of hopeless process.

And Mahatma's Krishnafest twin brother Gunagrahi swami (George Levinton) has in fact been one of these debauchee "pure devotee gurus" that Mahatma das has been promoting. Gunagrahi is apparently connected to: -- his own debauchee behaviors; supporting other debauchees as acharyas; ruining preaching programs; ruining people's lives; and he seems to be involved in various property scams in South America -- in addition to his crime of being a false prophet.

Magic Is The Chanting album for sale by Krishnafest was released May 06, 2008 on the Cd Baby label. Featuring His Holiness Danavir Goswami, His Grace Mahatma dasa & His Holiness Gunagrahi Goswami.

And recently 17 year old "Krishna Kid" writes, our abused and victimized children have been committing suicide seeing that these bogus leaders being given places of authority in Mayapura, why is this still going on? Its going on because guys like Mahatma have supported a process that keeps these deviants in places of authority, why else?

For that matter, even Mahatma himself is over and done with the GBC's process, even he cannot make his illicit sex messiah's program work, hence he is coming up with his new idea of "making workshops" for preaching, i.e. hiding who he really is and not admitting he is one of the main cheer leaders of the worship of debauchees as "successors to God" project. Now he is going to re-package himself as some sort of New Age spiritual counsellor and focus group leader.

So now he thinks there is some "other method" of re-packaging his stinky dead fish illicit sex messiah's program, and that will fool people into coming forward and offering support. This is another version of the Hrdayananda idea, that we need to repackage the Krishna religion a some sort of New Age psycho-babble, because its not working, or at least their version of it is not working.

These folks have to repackage themselves as someone other than who they really are, because people are not accepting who they are now, i.e. the world's leading living exponents of the worship of illicit sex "successors to God." Sulochan used to say, even dogs do not worship illicit sex, they are more advanced (than Mahatma das).

Too bad, the public will eventually find out that Mahatma is one of the world's leading living exponents of the idea that we have to worship his illicit sex acharyas program to attain God, and people will run away from that program just as they are running away from ISKCON now under their current debauchee messiahs project.

Mahatma seems to think that some sort of New Age seminars are going to fix things, when in fact hardly no one is coming to ISKCON because when they come to visit, Mahatma's ilk says they need to worship their debauchee guru program in order to attain God. People are simply not buying this idea in ISKCON, rather people are leaving in droves, why would they buy it elsewhere?

Even a number of the Indian devotees are waking up that this is a fraud: "As an Indian devotee I know many other Indian devotees have accepted the system of ritvik given by His Divine Grace. Only the bogus Gaudiya Math Gurus and the American Gurus and GBC want this living guru / acarya system kept going."

So go ahead Mahatma, start your New Age counselling program, and continue preaching that messiahs are often debauchees, and you will accomplish more of the same, i.e. you won't attract people. Mahatma also says he needs $125,000 a year for his program, well why not borrow this from the GBC since they are spending millions suing the Prabhupada devotees. They have plenty of money. Anyway this is a good sign, it means, they are de facto admitting their living debauchee pooja program is failing. Repackaging this stinky dead fish won't make it smell any better ... ys pd