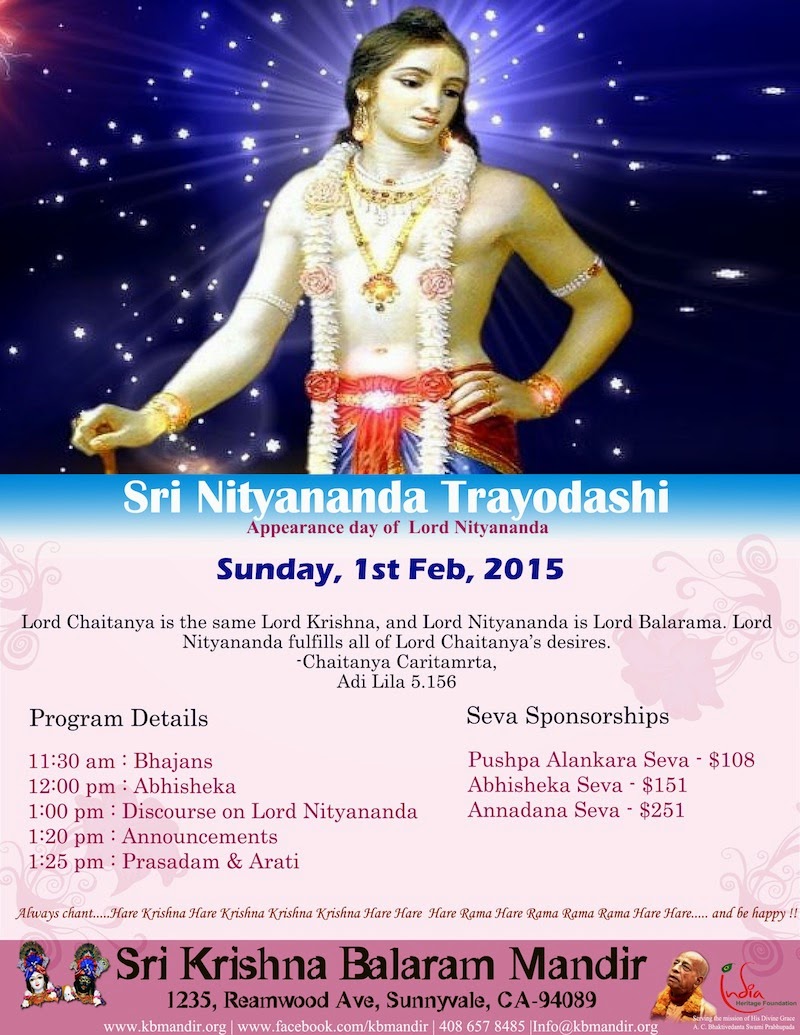 This year, the appearance day of Lord Nityananda is on Sunday, February 1, 2015. Devotees glorify the merciful avatar, Nityananda who was Balarama in Krishna’s pastimes. He accompanied Lord Chaitanya in spreading the holy names to save the most fallen souls. Devotees fast til Noon.

This chapter is chiefly devoted to describing the essential nature and glories of Sri Nityananda Prabhu. Lord Sri Krishna is the absolute Personality of Godhead, and His first expansion in a form for pastimes is Sri Balarama.

Beyond the limitation of this material world is the spiritual sky, paravyoma, which has many spiritual planets, the supreme of which is called Krishnaloka. Krishnaloka, the abode of Krishna, has three divisions, which are known as Dvaraka, Mathura and Gokula. In that abode the Personality of Godhead expands Himself into four plenary portions — Krishna, Balarama, Pradyumna (the transcendental Cupid) and Aniruddha. They are known as the original quadruple forms.

In Krishnaloka is a transcendental place known as Svetadvipa or Vrindavana. Below Krishnaloka in the spiritual sky are the Vaikuntha planets. On each Vaikuntha planet a four-handed Narayana, expanded from the first quadruple manifestation, is present. The Personality of Godhead known as Sri Balarama in Krishnaloka is the original Sankarshana (attracting Deity), and from this Sankarshana expands another Sankarshana, called Maha-sankarshana, who resides in one of the Vaikuntha planets. By His internal potency, Maha-sankarshana maintains the transcendental existence of all the planets in the spiritual sky, where all the living beings are eternally liberated souls. The influence of the material energy is conspicuous there by its absence. On those planets the second quadruple manifestation is present.

Outside of the Vaikuntha planets is the impersonal manifestation of Sri Krishna, which is known as Brahmaloka. On the other side of Brahmaloka is the spiritual karana-samudra, or Causal Ocean. The material energy exists on the other side of the Causal Ocean, without touching it. In the Causal Ocean is Maha-Vishnu, the original purusha expansion from Sankarshana. Maha-Vishnu places His glance over the material energy, and by a reflection of His transcendental body He amalgamates Himself within the material elements.

On the Vaikuntha planet in every universe is an ocean of milk, and within that ocean is an island called Svetadvipa, where Lord Vishnu lives. Therefore this chapter describes two Svetadvipas — one in the abode of Krishna and the other in the ocean of milk in every universe. The Svetadvipa in the abode of Krishna is identical with Vrindavana-dhama, which is the place where Krishna appears Himself to display His loving pastimes. In the Svetadvipa within every universe is a Sesha form of Godhead who serves Vishnu by assuming the form of His umbrella, slippers, couch, pillows, garments, residence, sacred thread, throne and so on.

The place where Nityananda Prabhu appeared is called Garbhavasa. Near Garbhavāsa is a place called Bakulatala, where Sri Nityananda Prabhu and His boyfriends used to take part in sporting activities known as jhala-jhapeta. There is a bakula tree there that is wonderful because all its branches and subbranches look like the hoods of serpents. It has been suggested that by the desire of Sri Nityananda Prabhu, Anantadeva manifested Himself in that way. The tree is very old. It is said that formerly it had two trunks, but later on, when the playmates of Nityananda Prabhu felt inconvenience in jumping from the branches of one trunk to those of the another, Nityananda Prabhu, by His mercy, merged the two trunks into one.

Another place nearby is named Hantugada. It is said that Lord Nityananda Prabhu brought all the holy places there. Therefore the people in the surrounding villages go there instead of to the Ganges to take bath. It is named Hantugada because Srila Nityananda Prabhu used to perform the dadhi-ciḍa festival of distributing chipped rice with yogurt prasada there and He took the prasada kneeling down.

A sanctified lake in this place is always full of water throughout the year. A great fair is held there during Gosṭhastami, and there is another big fair on the birthday of Sri Nityananda Prabhu. In the Gaura-gaṇoddesa-dipika it is described that Halayudha, Baladeva, Visvarupa and Sankarsana appeared as Nityananda Avadhuta.

After this function at the house of Srivasa Ṭhakura, Nityananda Prabhu appeared, and when He met with Lord Caitanya He got the opportunity to see Him in His six-armed form.

The form of Saḍ-bhuja, the six-armed Lord Gaurasundara, is a representation of three incarnations. The form of Sri Ramacandra is symbolized by a bow and arrow, the form of Lord Sri Kṛsna is symbolized by a stick and flute like those generally held by a cowherd boy, and Lord Caitanya Mahaprabhu is symbolized by a sannyasa-daṇḍa and kamaṇdalu, or waterpot.Srila Nityananda Prabhu was born in the village of Ekacakra in the district of Birbhum as the son of Padmavati and Hadai Paṇḍita. In His childhood He played like Balarama. When He was growing up, a sannyasi came to the house of Hadai Paṇḍita, begging to have the paṇḍita's son as his brahmacari assistant.

Hadai Paṇḍita immediately agreed and delivered his son to him, although the separation was greatly shocking, so much so that Hadai lost his life after the separation. Nityananda Prabhu traveled on many pilgrimages with the sannyasi. It is said that for many days He lived at Mathura with him, and at that time He heard about Lord Caitanya Mahaprabhu's pastimes in Navadvipa. Therefore He came down to Bengal to see the Lord. When Lord Nityananda came to Navadvipa, He was a guest at the house of Nandana Acarya. Understanding that Nityananda Prabhu had arrived, Lord Caitanya sent His devotees to Him, and thus there was a meeting between Śrī Caitanya Mahāprabhu and Nityananda Prabhu.