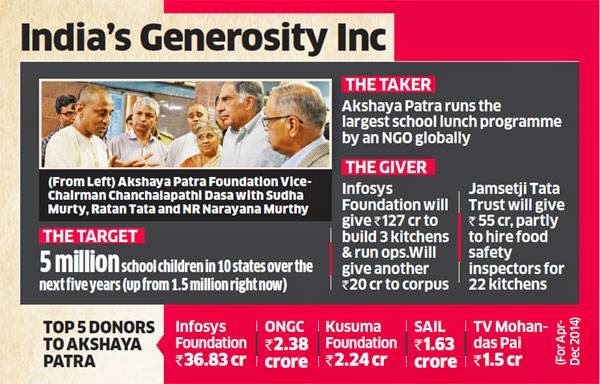 Economic Times: BENGALURU: The philanthropic arms of Infosys BSE 0.98 % and the Tata Group are together writing cheques for over Rs 200 crore to fund Akshaya Patra, a Bengaluru-based organisation which runs the largest school lunch programme by an NGO in the world. The money will be used to expand the reach of Akshaya Patra, and equip it with the latest food technologies to help it cook meals faster and cheaper while improving quality.

The Infosys Foundation, headed by Sudha Murty, the wife of the software company's founder, will contribute Rs 127 crore to build three modern kitchens and run operations and a further Rs 20 crore for the corpus. The Jamsetji Tata Trust will contribute Rs 55 crore to help the non-profit acquire the latest technology and improve food safety.


Akshaya Patra, which US President Barack Obama commended in 2008 as a model for other countries, is run by the International Society for Krishna Consciousness. In Hindu mythology, the Akhshaya Patra is a vessel with unlimited stores of food that was gifted by Lord Shiva to the Pandava king Yudhishtira. With the grants, the organisation, over the next five years, will target 5 million school children from the current 1.5 million in 10 states.

Infosys' grant will go into building modern kitchens at Jodhpur and Hyderabad, with a daily capacity for 50,000 and 1,00,000 meals, respectively. The IT giant will also meet the operational cost of kitchens at Jodhpur, Hyderabad and Mysuru, and expenses of meals and bottled drinking water provided to about 1.5 lakh children in Rajasthan.


The Tatas will cover hiring of qualified food safety inspectors for the 22 kitchens across India and four modern food labs at Ahmedabad, Bengaluru, Bhubaneswar and Lucknow, each of which will cost about Rs 50 lakh. The labs will handle chemical analysis and other tests to ensure the end food meets desired standards.
"When we made a presentation to Mr Ratan Tata, he agreed to support us to improve our internal food safety measures," Chanchalapathi Dasa, vice-chairman at Akshaya Patra Foundation, told ET. The organisation has roped in the Central Food Technological Research Laboratory in Mysuru for technology partnership.
The Tatas could not be reached for a comment. In another major shift made possible by Infosys' contribution, Akshaya Patra is switching to closed-vessel cooking technology, a technique that preserves the food's aroma. "We are importing the Tetra Pak technology from Sweden, and have placed orders for six machines, each of which can prepare 7,200 meals in 20 minutes," Dasa said.

"Our Hyderabad kitchen is going to be an orbit shifting technologychange for us." The organisation has asked Tetra Pak to start making the machines at its Pune plant as it does not want to continue with imports. The Infosys Foundation, Sudha Murty said, has been backing Akshaya Patra for a long time. "We have supported the mid-day meal programme wherever Infosys has its presence.
That explains why we want to do more in Rajasthan, where food and water are a big issue," she said. "We believe it is our moral duty to pay back to the society especially in places where we have a presence." Murty, who once worked for the Tata Group and hence addresses Ratan Tata as 'Chairman Sir', said, "I took my former boss (Tata) to my place (Hubli), and he was very impressed with the Akshaya Patra kitchen."


The organisation is currently looking for land in Bengaluru to locate its lab. "Our kitchens are currently running to capacity, so we are finding it difficult to accommodate the lab in the existing operations area," Shridhar Venkat, CEO at Akshaya Patra, said. While the Ahmedabad lab will be ready next month, and Lucknow lab in May, the ones at Bengaluru and Bhubaneswar will come up in 2016 and 2017, in that order.
:
Posted by krishna1008 at 7:40 AM