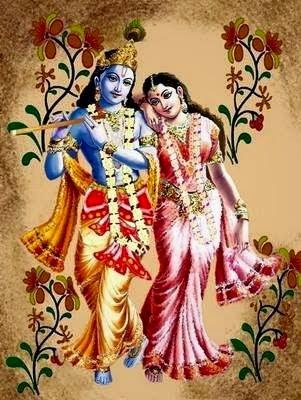 The pious and saintly Yudhisthira Maharaj said, "Oh Lord, You have so nicely explained to us the wonderful glories of the Saphala Ekadasi, which occurs during the dark fortnight (Krishna paksha) of the month of Pausha (December – January). Now please be merciful to me and explain to me the details of the Ekadasi that occurs in the light fortnight (Shukla or Gaura paksha) of this month. What is its name, and what Deity is to be worshiped on that sacred day? Oh Purushottama, Oh Hrishikesha, please also tell me how You can be pleased on this day"?

Lord Sri Krishna then replied, "Oh saintly king, for the benefit of all humanity I shall now tell you how to observe fasting on the Pausha-Shukla Ekadasi. As previously explained, everyone should observe the rules and regulations of the Ekadasi vrata, to the very best of their ability. This injunction also applies to the Ekadasi named Putrada, which destroys all sins and elevates one to the spiritual abode.

The Supreme Personality of Godhead Shri Narayana, the original Personality, is the worshipable Deity of the Ekadasi, and for His faithful devotees He happily fulfills all desires and awards full perfection. Thus among all the animate and inanimate beings in the three worlds (lower, middle and higher planetary systems), there is no better Personality than Lord Narayana. "Oh King, now I shall narrate to you the history of Putrada Ekadasi, which removes all kinds of sins and makes one famous and learned.

There was once a kingdom named Bhadraavati, which was ruled by King Suketumaan. His queen was the famous Shaibyaa. Because he had no son, he spent a long time in anxiety, thinking, ‘If I have no son, who will carry on my dynasty"?

In this way the king meditated in a religious attitude for a very long time, thinking, ‘Where should I go? What should I do? How can I get a pious son (putra)? In this way King Suketumaan could find no happiness any where in his kingdom, even in his own palace, and soon he was spending more and more time inside his wife’s palace, gloomily thinking only of how he could get a son.

Thus both King Suketumaan and Queen Shaibyaa were in great distress. Even when they offered tarpana (oblations of water to their forefathers), their mutual misery made them think that it was as undrinkable as boiling water. They thus thought that they would have no descendants to offer tarpana to them when they died and thus become lost souls (ghosts).

The king and queen were especially upset to learn that their forefathers were worried that soon there would be no one to offer them tarpana also. After learning of their forefather’s unhappiness, the king and queen became more and more miserable, and neither ministers, nor friends, nor even loved ones could cheer them up. To the king, his elephants and horses and infantry were no solace, and at last he became practically inert and helpless.

The king thought to himself, "It is said that without a son, marriage is wasted. Indeed, for a family man with no son, both his heart and his splendid house remain vacant and miserable. Bereft of a son, a man cannot liquidate the debts that he owes his forefathers, the demigods (devas) and to other human beings. Therefore every married man should endeavor to beget a son; thus he will become famous within this world and at last attain the auspicious celestial realms.

"A son is proof of the pious activities a man performed in his past one hundred lifetimes, and such a person achieves a long duration of life in this world, along with good health and great wealth. Possessing sons and grandsons in this lifetime proves that one has worshiped Lord Vishnu, the Supreme Personality of Godhead, in the past. The great blessing of sons, wealth, and sharp intelligence can be achieved only by worshiping the Supreme Lord, Sri Krishna. That is my opinion.

Thinking thus, the king had no peace. He remained in anxiety day and night, from morning to evening, and from the time he lay down to sleep at night until the sun rose in the morning, his dreams were equally full of great anxiety. Suffering such constant anxiety and apprehension, King Suketumaan decided to end his misery by committing suicide. But he realized that suicide throws a person into hellish conditions of rebirth, and so he abandoned that idea. Seeing that he was gradually destroying himself by his all consuming anxiety over the lack of a son, the king at last mounted his horse and left for the dense forest alone. No one, not even the priests and brahmins of the palace, knew where he had gone.

In that forest, which was filled with deer and birds and other animals, King Suketumaan wandered aimlessly, noting all the different kinds of trees and shrubs, such as the fig, bel fruit, date palm, jack fruit, bakula, saptaparnaa, tinduka, and tilaka, as well as the shala, taala, tamaala, saralaa, hingotaa, arjuna, labheraa, bahedaa, sallaki, karondaa, patala, khaira, shaka and palaasha trees. All were beautifully decorated with fruits and flowers.

He saw deer, tigers, wild boar, lions, monkeys, snakes, huge bull elephants in arut, cow elephants with their calves, and four-tusked elephants with their mates close by. There were cows, jackals, rabbits, leopards, and hippopotamuses. Beholding all these animals accompanied by their mates and offspring, the king remembered his own menagerie, especially his palace elephants, and became so sad that he absent mindedly wandered into their very midst.

Suddenly the king heard a jackal howl in the distance. Startled, he began wandering about, looking around in all directions. Soon it was midday, and the king started to tire. He was tormented by hunger and thirst also. He thought, "What sinful deed could possibly have done so that I am now forced to suffer like this, with my throat parched and burning, and my stomach empty and rumbling? I have pleased the devas (demigods) with numerous fire sacrifices and abundant devotional worship. I have given many gifts and delicious sweets in charity to all the worthy brahmins too. And I have taken care of my subjects as though they were my very own children. Why then am I suffering so? What unknown sins have come to bear fruit and torment me in this dreadful way?"

Absorbed in these thoughts, King Suketumaan struggled forward, and eventually, due to his pious credits, he came upon a beautiful lotus bearing pond that resembled the famous Lake Maanasarova. It was filled with aquatics, including crocodiles and many varieties of fish, and graced with varieties of lilies and lotuses. The beautiful lotuses had opened to the Sun, and swans, cranes and ducks swam happily in its waters.

Nearby were many attractive ashramas, where there resided many saints and sages who could fulfill the desires of anyone. Indeed, they wished everyone well. When the king saw all these, his right arm and right eye began to quiver, a sakuna sign (for a male) that something auspicious was about to happen.

As the king dismounted his horse and stood before the sages, who sat on the shore of the pond, he saw that they were chanting the holy names of God on japa beads. The king paid his obeisances and, joining his palms, addressed them with glorified praises. Observing the respect the king offered them, the sages said, ‘We are very pleased with you, Oh king. Kindly tell us why you have come here. What is on your mind? Please inform us what is your heart’s desire.’

The king replied, ‘Oh great sages, who are you? What are your names, surely your presence reveals that you are auspicious saints? Why have you come to this beautiful place? Please tell me everything.’ “The sages replied,"Oh king, we are known as the ten Vishvadevas (the sons of Vishva; Vasu, Satya, Kratu, Daksha, Kaala, Kaama, Dhriti, Pururavaa, Maadrava and Kuru). We have come here to this very lovely pond to bathe. The month of Magha (Madhava mase) will soon be here in five days (from the Magh nakshatra), and today is the famous Putrada Ekadasi. One who desires a son should strictly observe this particular Ekadasi.’

The king said, ‘I have tried so hard to have a son. If you great sages are pleased with me, kindly grant the boon of having a good son (putra).’ ‘The very meaning of Putradaa, ‘the sages replied, ‘Is “giver of a putra, pious son.” So please observe a complete fast on this Ekadasi day. If you do so, then by our blessing and by the mercy of Lord Sri Keshava invested in us – surely you will beget a son.’

On the advice of the Vishvadevas, the king observed the auspicious fast day of Putrada Ekadasi according to the established rules and regulations, and on the Dvasdasi, after breaking his fast, he paid obeisances again and again to all of them.

Soon after Suketumaan returned to his palace and united with his queen. Queen Shaibya immediately became pregnant, and exactly as the Vishvadevas had predicted, a bright faced, beautiful son was born to them. In due course of time he became famous as an heroic prince, and the king gladly pleased his noble son by making him his successor. The son of Suketumaan took care of his subjects very conscientiously, just as if they were his own children.

In conclusion, Oh Yudhisthira, one who wishes to fulfill his desires should strictly observe Putrada Ekadasi. While on this planet, one who strictly observes this Ekadasi will surely obtain a son, and after death he will achieve liberation. Anyone who even reads or hears the glories of Putrada Ekadasi obtains the merit earned by performing a horse sacrifice. It is to benefit all humanity that I have explained all this to you.”

Thus ends the narration of the glories of Pausha-shukla Ekadasi, or Putrada Ekadasi, from the Bhavishya Purana of Veda Vyasadeva.
Posted by krishna1008 at 8:57 AM