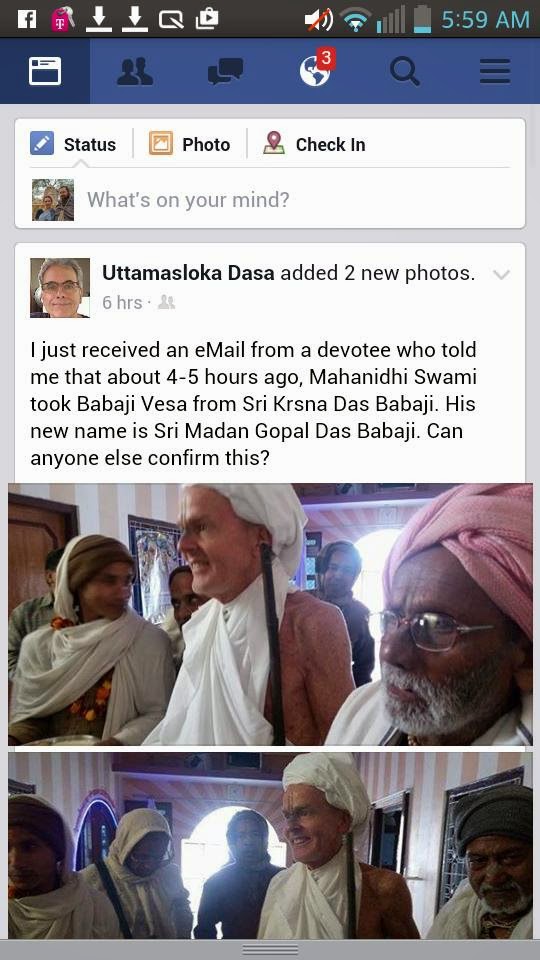 [PADA: We are told this Babaji "re-initiation" has been confirmed. Apparently Mahanidhi has a new "spiritual name" Sri Madan Gopal Das Babaji, but we will find out more as time goes on.  Srila Prabhupada's disciples were being "re-initiated" even way back in the early 1970s by some of his God brothers and he said this is "spiritual prostitution," and a severe breach of Vaishnava etiquette.

Yep, these ISKCON leaders (OK folks like Mahanidhi swami) first of all destroyed ISKCON by creating a huge wave of criminal and sexual predator guru programs -- especially all through the 1980s. And once they basically ruined ISKCON with scandals and crimes in the name of Hare Krishna and Krishna's acharyas -- then they just walked away from the burned out wreckage they created, bailed out, and left. Now Mahanidhi is bailing out.

This has been their pattern going on all the way back to the original 11. They first of all destroyed the place, or as Srila Prabhupada says about the 1936 false gurus "they made a fire in the matha." And then once they had been -- for sure and certain -- that the ISKCON palace had been burnt to ashes, most of them just packed up and left, usually hijacking some followers and money on the way out the door.

And the rest of the GBC pretty much just sits around and does nothing to halt this process, and they rarely even make comments on this process as they see it unfolding right before their eyes. So Mahanidhi will leave, and most likely take a few dozen ex-ISKCON folks with him, which further drains down ISKCON into an even more desolate and empty ghost town.

This is exactly what Srila Prabhupada warned us about, do not break down the preaching by going to these Radha Kunda babajis. Mahanidhi was caught in a sex scandal while posing as an ISKCON sannyasa / saint, and he could not recover from that (yep -- and some folks thank PADA for bringing forward the Mahanidhi story) so he has apparently gone elsewhere to get some newly minted friendship, society, love, position, titles and recognition.

This is all pratistha, the desire for name and fame. Unfortunately, getting "a good name" for oneself at the expense of one's guru and his mission does not help matters much. This will simply create another wave of people leaving ISKCON to go and take re-initiation elsewhere.

Anyway, this is good for us in the long run. These people are not part of ISKCON, and hardly ever were in the first place. Let these renegade saints leave, we need them to get out and quit mis-representing themselves as ISKCON. Same basic problem we have with the HKC Jaipur folks, they are promoting Bhakta das -- ok one of the biggest Gaudiya Matha / Radha Kunda Babaji / GBC guru cheer leader around -- actually they are vociferously cramming Bhakta das down our throats. These folks are cramming every single deviation coming down the pipeline into ISKCON.
And Bhakta das ALSO says we need to support the Mahanidhi program, i.e. illicit sex posing as renunciates. Sacinandana Swami -- and a pack of other GBC types -- are also involved with this Babaji program. That means these people are part of this sahajiya / Babaji / re-initiation process.

We know personally the ex-servant of Mahanidhi who caught him "with a woman." Sorry -- promoting this program as Vaishnava saints is sahajiya-vada. So this is simply another promotion of illicit sex messiah's process. Why would these babajis give babaji initiation knowing Mahanidhi has been caught in a scandal?

Anyway! These people all support the hi-jackers program and are all in favor of turning ISKCON into a sahajiya and babaji camp. Let them all leave and get re-initiated officially somewhere else so that ISKCON will no longer have to support them as their saints. This is all for the best, let the people who want to promote Srila Prabhupada be distinguished from these renegades -- i.e. those who do not want to promote him. This is like the old Texas saying, "Its better to have an empty barn than a barn full of sick cows." Hee hee! ys pd