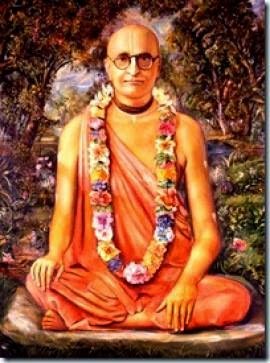 "On the fifth day of the dark lunar fortnight of the month of Govinda [corresponding to February 6th, 1874 A.D. by the western calendar], at 3:30 in the afternoon, Bimala Prasad Datta, later to be known as Srila Bhaktisiddhanta Sarasvati Thakura, made his appearance in Purusottama Ksetra [Jagannatha Puri] in the state.

Bhaktisiddhanta Sarasvati Ṭhakura passed away from this material world on 31st December, 1936. So almost forty years past. So there are two phases, prakrta and aprakaṭa, appearance and disappearance. So we have nothing to lament on account of disappearance because Krishna and Kṛishna's devotee... Not only devotees, even the non devotees, nobody disappears.
Nobody disappears because every living entity... As Krishna is eternal -- it is confirmed in the Vedic literature, nityo nityanam cetanas cetananam. The description of the Supreme Lord is that He is also nitya, eternal, and the living entities are also eternal. But He is the chief eternal. Nityo nityanam cetanas cetananam. So qualitatively, there is no difference between Krishna and the living entities. And quantitatively, there is difference.
What is the difference between nitya, the singular number nitya, and the plural number nitya? The plural number nitya are subordinate, eternal servants of the singular number nitya. Just like if you want to serve somebody, so the master is also exactly like you. He has got two hands, two legs, or the same sentiments. He also eats. Everything is same there. But the difference is the master and the servant. That's all. Otherwise, equal in every respect.
So spiritually, appearance and disappearance, there is no difference. Just like in material point of view, if a person takes birth... Suppose you get a son born, you become very happy. The same son, when passes away, you become very unhappy. This is material. And spiritually, there is no such difference, appearance or disappearance. So although this is the disappearance day of Om Viṣnupada Sri Srimad Bhaktisiddhanta Saraswati Ṭhakura, so there is nothing to be lamented.
Although we feel separation, that feeling is there, but spiritually, there is no difference between appearance and disappearance. There is a song, Narottama dasa Ṭhakura's song, ye anilo prema-dhana. Do you know, any one of you? Can you sing that song anyone? Oh. Ye anilo prema dhana ... I don't remember exactly the whole song. That is our lamentation, that Śrīla Bhaktisiddhānta Saraswati Ṭhakura, he brought this message to distribute all over.
Of course, Sri Caitanya Mahaprabhu expressed His desire, that:

He predicted that "All over the world, as many towns and villages are there, everywhere My name will be known." Śrī CaitanyaMahāprabhu's name. Which is now, attempted now, it is being actually... To execute this will of Sri Caitanya Mahaprabhu, He said that personally,

He wanted that His name should be broadcast all over the world in every town and village. And who would do it? That He asked that anyone who has taken birth in Bharata-varṣa, India, it is his duty: first of all make himself perfect by understanding the philosophy of Sri Caitanya Mahaprabhu, then broadcast it, distribute it. This was the duty of every Indian.

So Indian, especially in India, they have got the privilege to take advantage of the Vedic literature. In other countries there is no such advantage. So if anyone wants to make his life perfect, then he has to take advantage of the vast treasure-house of Indian spiritual knowledge. Even one Chinese gentleman, he has written one book about religion. That is a course in New York University.
So he has said that "If you want to know something of religion, then you have to go to India." That's a fact. So Caitanya Mahaprabhu said that every Indian... There is need of broadcasting this Krishna consciousness movement, all over the world. So it is the duty of every Indian to first of all make his life perfect. He must know... Perfection means he must know what is his position and what he has to do.
That is perfection.
At the present moment, people do not know what they are even, whether he is this body or something extra. The big, big scientists, they are also failure. This is perfection. First of all one must know what he is, whether he is this body or something beyond this body. This is the beginning of spiritual knowledge. So that advantage is there in India, by culture, by education. Therefore Sri Caitanya Mahaprabhu requested that Indians, bharatiya,
Bharata varsa, those who have taken birth as human being... He doesn't speak to the animals. Bharata bhumite manusya janma. Manuṣya janma means human being. Because without being a human being, nobody can understand these things. The cats and dogs, they cannot understand. So a person whose behavior is like cats and dogs, he also cannot understand. Therefore He said, janma sarthak kari. First of all make your life perfect and then distribute this knowledge. This is the Mahaprabhu's mission.
So He simply said, but He was expecting that in later days His followers would do that. So that attempt was made by Bhaktisiddhanta Sarasvati Ṭhakura. Bhaktivinoda Ṭhakura, he desired and, that Sri Caitanya Mahaprabhu's message, it should be accepted by East and West equally, and both the Indians and Europeans, Americans, they should dance together in ecstasy of Sri Caitanya Mahaprabhu's mercy.
That was his desire, Bhaktivinoda Ṭhakura. He simply expressed the desire, "When I shall see this happening, that both the eastern and western people they are united on the basis of Sri Caitanya Mahaprabhu's cult and dancing together in ecstasy?" That was his ambition. That was also the ambition of Sri Caitanya Mahaprabhu and this was ambition of Bhaktivinoda Ṭhakura. And Sri Bhaktisiddhanta Sarasvati Ṭhakura took up this affair, business, and he also wanted this first of all.

So every student, any disciple, every disciple, especially those who are competent, he requested that "You take up this mission of Caitanya Mahaprabhu and preach in the western countries. That was Bhaktisiddhanta Sarasvatī Ṭhakura's first attempt. Before that, even the acaryas, Rupanuga Gosvamīs, they left literature, but they did not attempt to preach practically. And Bhaktisiddhānta Sarasvatī Ṭhakura, he was very, very anxious to preach this Chaitanya cult in the western countries. This is Sri Bhaktisiddhanta Sarasvati Ṭhakura's special contribution.
Posted by krishna1008 at 7:58 PM