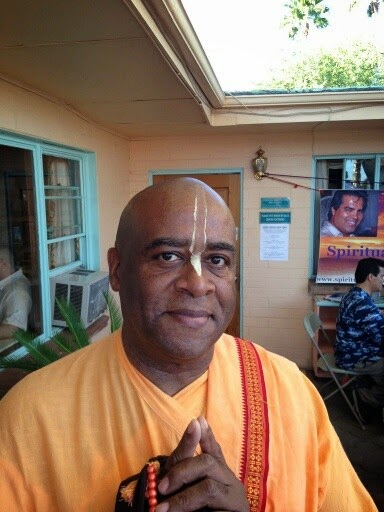 Anyone who has had the pleasure to know Urjasvat knows he’s one of the sweetest devotees you’d ever meet. His big eyes, endearing smile and his firm conviction in the holy name of Krishna, made him dear to many.


Urjasvat only recently came to Tucson, although he’d visited many times and expressed the desire to move here for the loving family atmosphere he felt at the temple. Only this past summer was I able to create a facility for him, a small private cottage, surrounded by other devotees on the temple property. He was in bliss, and the devotees reciprocate with him so much.

Urjasvat was giving regular classes, leading kirtan and being the sometimes heavy big brother, when he knew you were in a bit of maya and needed some sauce. He was 100% convinced of the philosophy and knew ultimately everyone’s problem was that they were not applying the process to the greatest extent they could, and he was there to remind us.

When Urjasvat didn’t come to mangal arati this morning like he always did, I sent a few devotees over to check on him. When they returned and said the light was on, his shoes were there but didn’t answer the locked door, I got a lump in my stomach. They went back with the key and found him lying on the floor with the book Gaura Satanam Strotam in his hand, with his eyes still open. He left his body like he lived, fully conscious of Krishna, always absorbing himself in shastra and with the holy name on his lips. He had just told the devotees who had gathered with him for lunch yesterday while he gazed at the sky, ‘I am just waiting for the Vaikuntha Express, to come and take me.” And indeed it did. All glories to Urjasvat prabhu, who gave us such a wonderful example of a fixed devotee, surrendered at the lotus feet of Srila Prabhupada. We will miss him dearly.

[PADA: Urjasvat lead some mighty good kirtans back in the day. Yep, but still life is very temporary, even for a devotee of Krishna. So! We should all be nice to each other and unite under the same father, namely Krishna, since we are all NOT going to last here for very long. We should unite as the family of Krishna's children and move ahead. Urjasvat wanted to be with a family of devotees, but he (like a lot of us) was not happy with all of the schisms and divisions our Krishna devotees experienced after 1977.

At the same time, departing devotees are sometimes a wake up call for us all.

There was an incident recently where a sort of GBC sympathizer devotee, who had been a little mean spirited towards our folks, was trying to create some new problems for one of our Prabhupadanugas. Before he could even get started -- causing our friends another major head ache -- he suddenly died of a major heart attack, which sort of shocked everyone because he had looked fine and healthy the day prior to his death.

That was a wake up call for many folks, who saw his departure as a sign of the temporary nature of this world. And so what happened was -- the GBC sympathizer crowd and the Prabhupadanuga folks started to all of a sudden get along better, and be nicer to one another, seeing that we can all leave this world at any second, so its better to leave this world feeling nice about others than begrudging others. A departing devotee is thus a neon sign post to all the remaining devotees -- to sharpen their thinking of Krishna and to try to act with more love and compassion for one another.

Anyway we wish the best for ALL of our departed God brothers and sisters. All of our brothers and sisters, whether so-called favorable to us (or maybe not so favorable to us) have been part of our collective lila of life within ISKCON and we have learned a lot from ALL of them. And some of our most opposite devotee family member have taught us valuable things in life, which we never would have learned otherwise.

They have ALL helped us in their own way with certain issues that were important for us to realize. We also never would have understood certain points of vaishnava siddhanta so clearly without their help, whether apparently good or bad help, seeing their whole situation has been a life lesson that one cannot get any other way. And thus we learned a lot from the apparent saints and sinners alike.

All of this "ISKCON lila" has helped us increase our desire to take shelter of Lord Govinda, just like Queen Kunti says that the apparent good or apparent bad is all for our benefit, to make us think more of the Lord. We hope Krishna will give all of the brothers and sisters His blessings and move them ahead on the path back to God head. We wish Urjasvat das in particular all the best in his voyage back to Krishna. Have a safe and happy journey back to Krishna's lotus feet! ys pd]