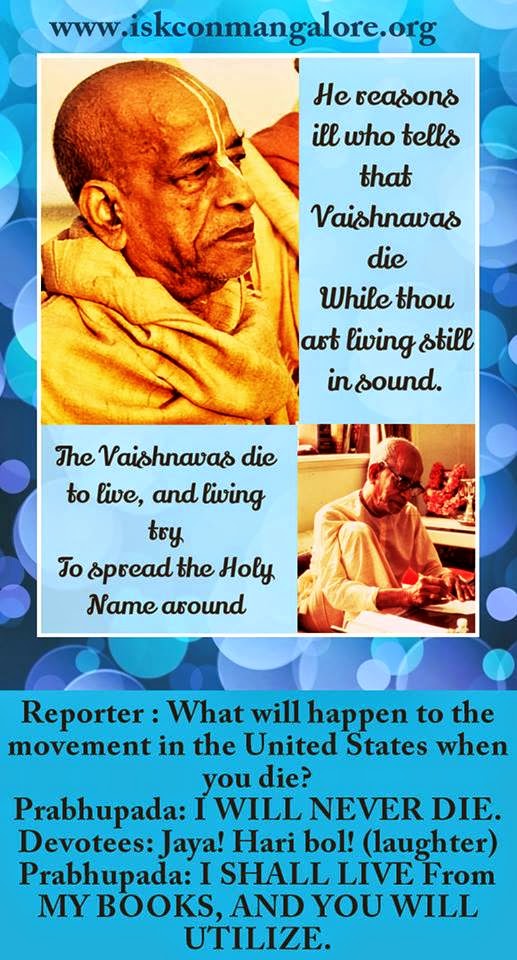 Srila Prabhupada and Lord Jesus Christ have been my only Guru and will be forever.

I can not tolerate and I have no time or interest whatsoever in anyone praising FAKE Guru's or seeing their mug shots coming through. I thought the post I had just seen praising two hugging Guru's was a joke...but no it is serious. sigh*


So straight to their page and press unfriend. I am not angry at all, I am completely calm, but I am ONLY interested in hearing of and directly from Prabhupada and His original books, words, lectures etc.. I care not for the number of people on my friend list, five is fine as long as they are Prabhupada devotees, quality of Friends sincerity to Srila Prabhupada is what matters, not the numbers.

I have tried to find a place on my page to make this clear before people send friend invites. Even though i feel shy and awkward to ask i will have to ask directly straight away in PM when i say "hello" after accepting.

If you are following an Iskcon Guru OTHER than Prabhupada then please surrender to Prabhupada and hear from Him directly. If you have no desire to, then kindly please take me off your friend list. ALL GLORIES TO SRILA PRABHUPADA

[PADA: Wow! This person has more realization than most of our dear "God brothers." Nice! Every day we get another person like this on board, we are moving ahead. ys pd]
Posted by krishna1008 at 6:38 PM