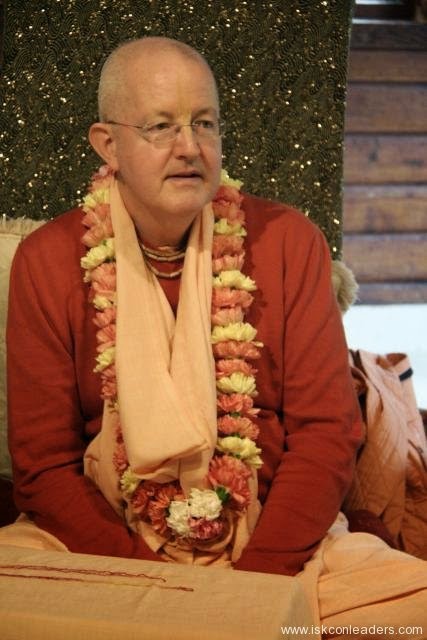 
[PADA: Romapada swami has been reputed to be taking (siphoning?) millions of dollars from various ISKCON spin - off charities and then "lending money" to ISKCON programs (with interest) so he can make even more money.

There have been troubles in his Brooklyn temple which we reported over the years, such as reports of renting out part of the temple for a Haitian Disco, where alcohol (and allegedly meat sandwich's) were being sold. Never mind we were also told there were scantily clad "Haitian dancing girls" hanging out in front of the temple until wee early morning hours, allegedly some of them were prostitutes.

Then we heard that the Disco's noise from the loud music and shouting on the sidewalk was too much for the neighbors, and this program was shut down by the city. Yep, it seems the mundane "karmis" often have to rescue "the devotees" from various crack pot problems on a regular basis.

Of course as soon as PADA gets help from the "karmi's" FBI, police and media then the "devotees" cry that we are "working with the demons." Well yeah, because that is how we kept alive all this time, they protected us from being assassinated, and still do for that matter. Anyway, Brooklyn then had their infamous Bingo hall, which filled up the place with little old ladies at Bingo tables, ok a much better crowd than the Disco, but this ended up in some kind of lawsuit and was closed.

Now that these "business scams" have not worked out so well, the Brooklyn temple is up for sale, which almost everyone agrees, is another huge money scam. It seems there is no accountability here, as Dasarath prabhu points out. Dasarath's whole Sedona program has been in a topsy turvy state with all these GBC's politics and machinations. The good news is that these Phoenix people all moved off to form their own independent program, which is what they should have done 20 years ago.

Another amazing thing is that over the years some GBC ilk said that PADA should be shut down, so they can have no one protesting all these deviations, including their Haitian Disco program. These people want to use ISKCON for a Haitian Disco, no wonder they are upset with PADA!

They want that type of program expanded to other temples? Meanwhile the Romapada program took our friends to court saying they should not call themselves ISKCON, but the court wanted to know why Romapada's program is not using the name of ISKCON, and he has started another charity in another name?

Its really is amazing to us that some people want to "stop PADA" so they can turn ISKCON's temples into Haitian discos -- with no one protesting their process of deteriorating the Krishna religion. And as soon as someone starts a nice program of kirtana and pooja, like we have in Bangalore, then they want that shut down too. Haitian Discos ki jaya! Apparently?

Then these same people claim to wonder why the Krishna religion is in the tank?

Because they put it there.

Another amazing thing is that some folks still say "no one listens to PADA." Really? Well we were writing about Romapada's shennanigans 10-15 years ago, and now others are following our footsteps, albeit a day late and a dollar short. The unfortunate problem now is, way too many people DO believe us and agree with PADA. We wish none of these things were true, but more often than not, they are true. And we reported all these kinds of things in ancient times as far as ISKCON goes, its just that others are finally getting up to speed on our old stories. Sorry, the stories we wrote many years ago are constantly being confirmed, that's all. We said Romapada is a rotten apple last century, and now others are agreeing, its that simple. ys pd]

So many things said is simply lip service as long as this eysore remains. Romapada Swami ask yourself if a Bingo hall at ISKCON Brooklyn pleases Srila Prabhupada ... this should be the top priority of the GBC and the ILS? Where is the GBC, ISKCON resolve, and so called senior devotees when they are needed for such an important thing? This is my question,

I was not in the class, my hand is raised: When will the GBC close the Bingo hall? It violates GBC rules of 1996 and that thing breaks the 4 regulative principles, these are not allowed on any ISKCON property, that is 2 rgs broken right there -- meat eating and gambling... Again, its the GBC program of "all about money with no moral scruples"?

If Ramabhadra and Romapada Swami can not close this Bingo hall, I humbly request the GBC to remove them from all managerial positions, yes I am also a brahmin and vaisnava, but they can not take any good advise? However this is the GBC law and they are braking it.....how can they be managers in ISKCON? Srila Prabhuapda was concerned the GBC maintain standards ....why are they not?

[PADA: Thanks prabhu, No! The GBC had nothing to do with closing the Bingo Hall? This was apparently closed because they did not pay their rent to Romapada, so he sued them to collect the rent. The cheaters and the cheated. Yes PADA was the first person to protest the Haitian Disco, Bingo Hall etc. which is why the GBC and their henchmen wanted us stopped. ys pd]