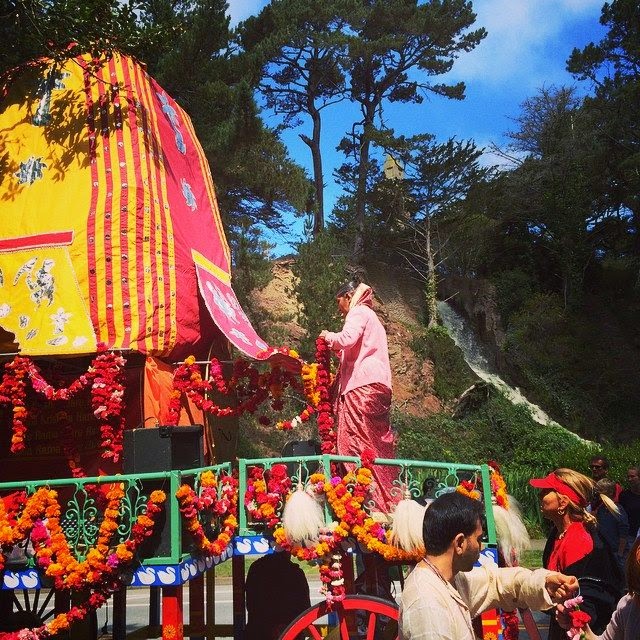 PADA: San Francisco Rathayatra is always interesting. In the past we have always had a few big shot GBC gurus, and maybe Tripurari swami, and maybe Narayana maharaja people walking around distributing their books, and maybe a few others like them, but this year these folks did not appear. There was instead, a pretty good mood of focus on Srila Prabhupada. We really did not see much "show boating" from any of these self-appointed acharyas this time around, and that was really refreshing.

Basically we had: (A) Vaisesika's crew from San Jose, (B) ISKCON Berkeley temple folks, (C) Various ritviks, and (D) A small group from the Fremont Hindu temple. Of course we also had the (smaller sized) ISKCON LA rath cars and the Prabhupada Festival folks from North Carolina.

The good news is that the ISKCON leaders are finally getting smart enough to know they cannot sit around in big seats and try to hi-jack the Srila Prabhupada programs anymore, people are tired of that, especially around here. More and more people just want to glorify Srila Prabhupada, and we noticed that all the "guru mantra" kirtans were being done to him exclusively. OK it is more and more like the good old (1970s) days. Good progress.

I think its finally starting to sink in to some of the GBC's management -- they need to work with some of the ritviks -- at least some of the time -- for a festival like this, or else risk that there will not be enough people to manage the program. So its sort of a marriage of convenience that all these people come together, ok for once a year at least, knowing that everyone has to join forces or there may not be any festival at all. In other words, the GBC's program is not strong enough by itself to do things like this on their own anymore, and there are not enough ritviks as of yet to do a complete program either.

We really did not see the "living guru" book tables this year, which was a really good sign of progress. Without making a direct admission from the GBC, the GBC's guru program is rather self-apparently slowly fading out and the Srila Prabhupada program is coming back, slow but sure. It seems to be finally dawning on them that either they emphasize Srila Prabhupada, or they may end up with nothing, of course they barely have anything left at this stage already.

Sunnyvale's Prabhupadanuga folks -- on the other hand -- for the most part simply avoided coming at all because they are not too happy that the GBC is suing the Prabhupada devotees in India. This is really a shame because they have some very talented people who could do a lot to make the festival a greater success. So their financial and manpower help will be absent until the GBC makes some reconciliation with this group. Of course, their own programs and festivals are already very successful and they really do not need to form a cooperative alliance with the GBC.

Most of the people talking to us were asking about the status of the Bangalore court case. Just about everyone is watching that case around here, and the clear consensus is that the San Francisco devotees want Bangalore to win. People were saying things like, "When are all these GBC guru bums going to be where they really belong -- on Patala loka? We can hardly wait for the Yamaduttas to cart them off!; When are all these bogus gurus going to get a real job?; When are all these bogus gurus going to quit kicking us all out, harassing us?" and so on. OK nobody came up and said, we are rooting for the GBC's gurus! Yep, locally they appear to be about as popular as the black plague. A few people also told me, yep, the poison case is real.

One devotee who used to be very prominent in ISKCON told us how he is retired but does not have dental insurance, so he has to struggle to get his teeth fixed. Its very painful waiting to get them fixed -- one at a time. When I told him the GBC was spending $20,000,000 suing the Prabhupadanugas, he almost fainted. He said, "You mean I have to struggle in pain with hardly any money, and fix one tooth at a time while being in pain with the other bad teeth -- while these GBC guru guys pour dump truck loads of money into the sewer"? I said, "Yup! You got it, that's their plan all along"!

Everyone is amazed that the GBC is wasting all this money on lawyers so they can kick out the very few people left in ISKCON. I told him that several GBC temples have rats, and again that is apparently another part of their entire plan all along: they want to make sure that more and more and more temples have rats, and its apparently very expensive to make sure the temples are filled with rodents and not people, indeed it costs millions of dollars to drive out all these people. No wonder they are always asking for more funds!

An ex-kuli said he was not happy that there is no place for him and his friends in ISKCON. He has a karmi job and he is happy to have any job at all these days when its tight to find one. I also told him the GBC is spending millions to drive more people like you out, and he could not believe how cruel and foolish they are. He also said "I will be the first person to come out and dance on their graves." I said, "No, you'll have to race with thousands of others, you'll have to be fast to be the first." He laughed hysterically. Its hard to believe how the GBC could not know how badly they have alienated all these thousands and thousands of people?

Of course there were also a lot of general high fives from people who are encouraged our program is progressing.  Overall, it was a great festival because the living gurus were conspicuous by their absense and the focus on Srila Prabhupada was very strong. One devotee has made a dramatic health improvement and he said that is because Krishna wanted him to see the better Prabhupadanuga mood changes in ISKCON. That is the trend and tendency, more and more people want to see Srila Prabhupada given his rightful place, and it is developing that way.

Its getting harder to see any difference from the 1970s Rathayatras and this one. And all this is the result of the hard work of many Prabhupadanugas all over the world -- who have made these issues change by their preaching. OK, they forced the issues. So, this is what we wanted to see happen and its happening by Krishna's grace. We are sorry some of us had to often use the "buzz saw chopper technique" to get some of these things fixed or changed, or even addressed, but the results are promising, and that is all that really matters to us. We have to judge a thing by the result, and the result clearly is, Srila Prabhupada is re-emerging as the acharya of ISKCON. Goody! Anyway, here are a few photos from the event: ys pd 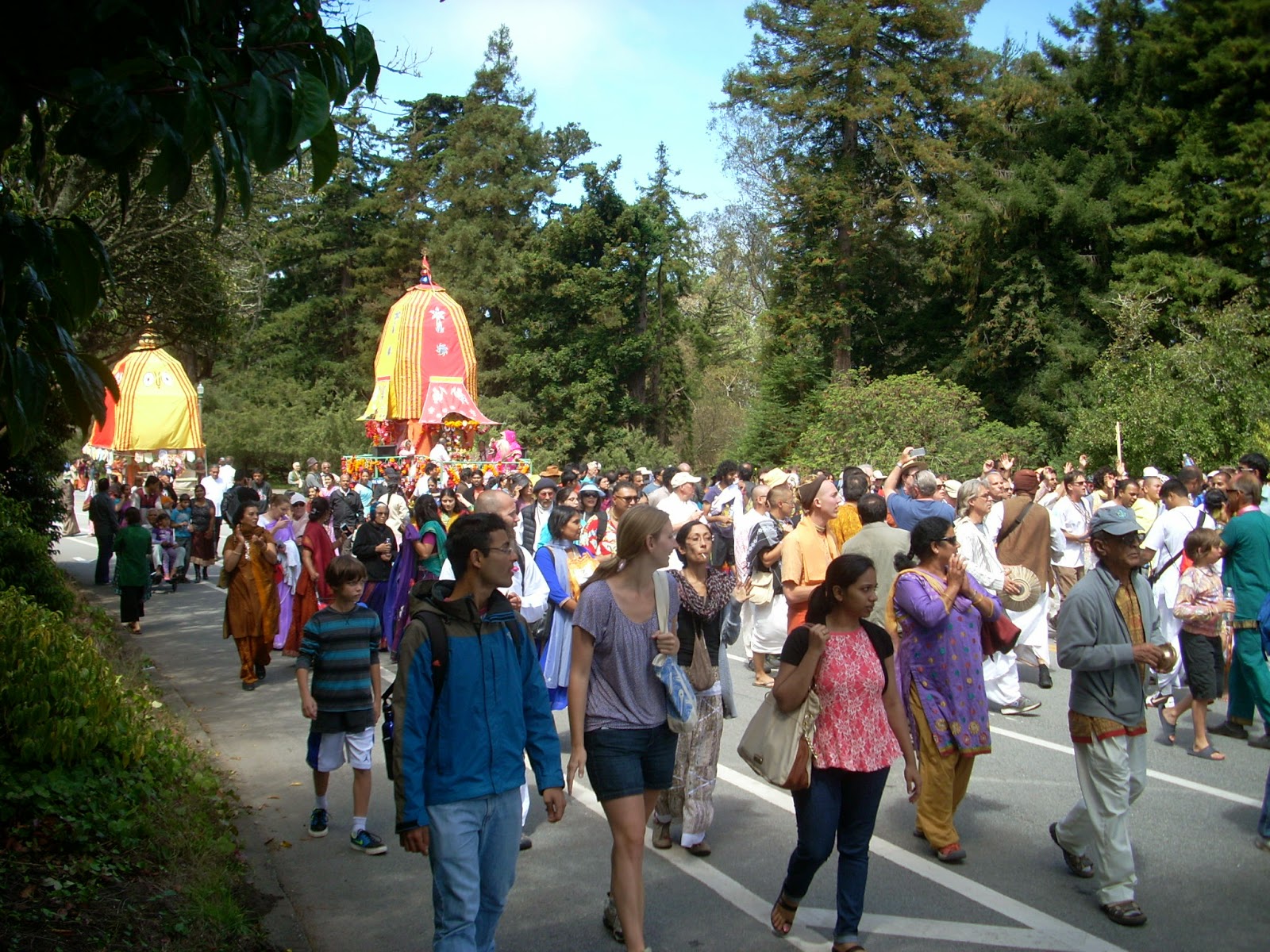 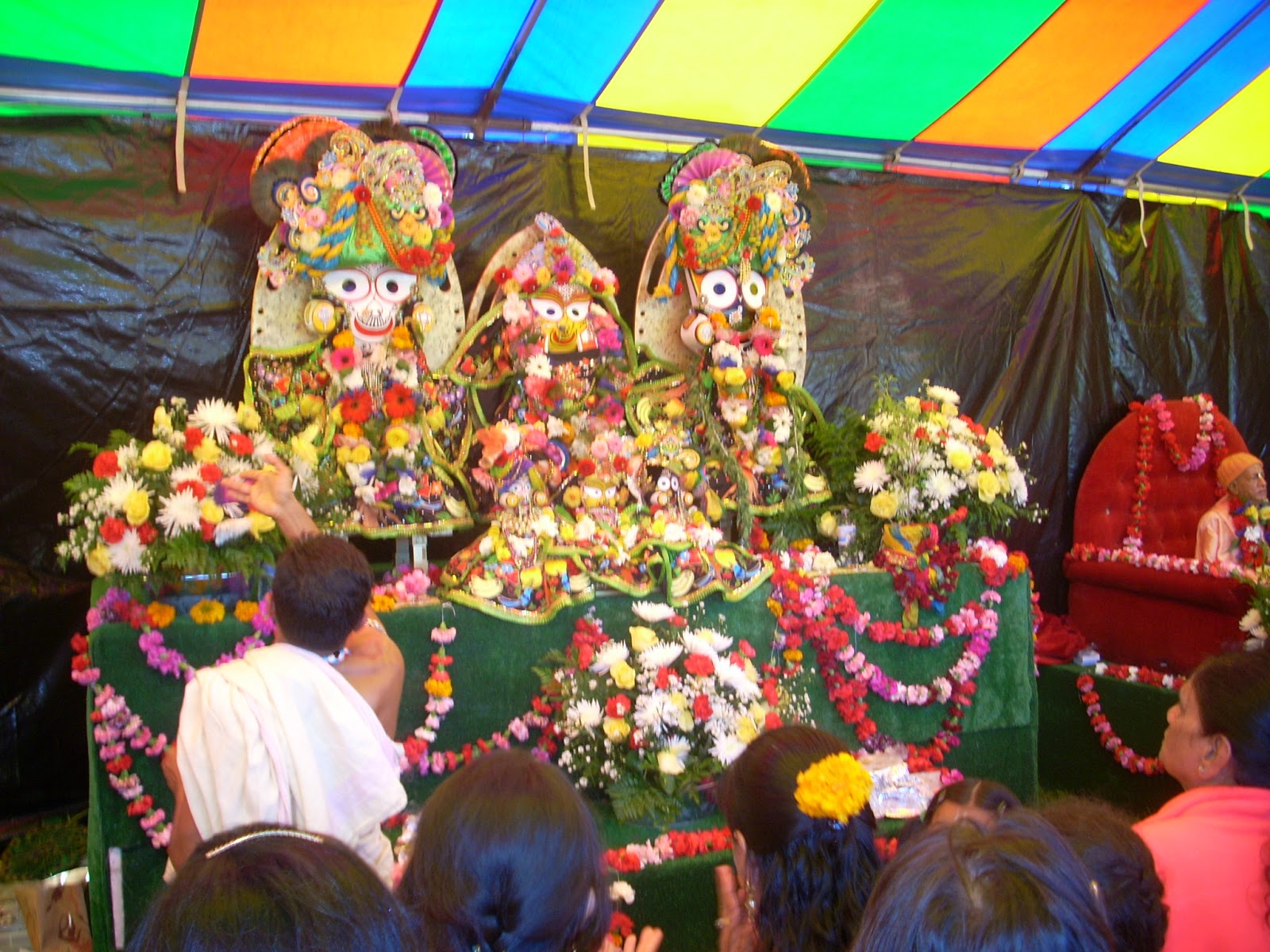 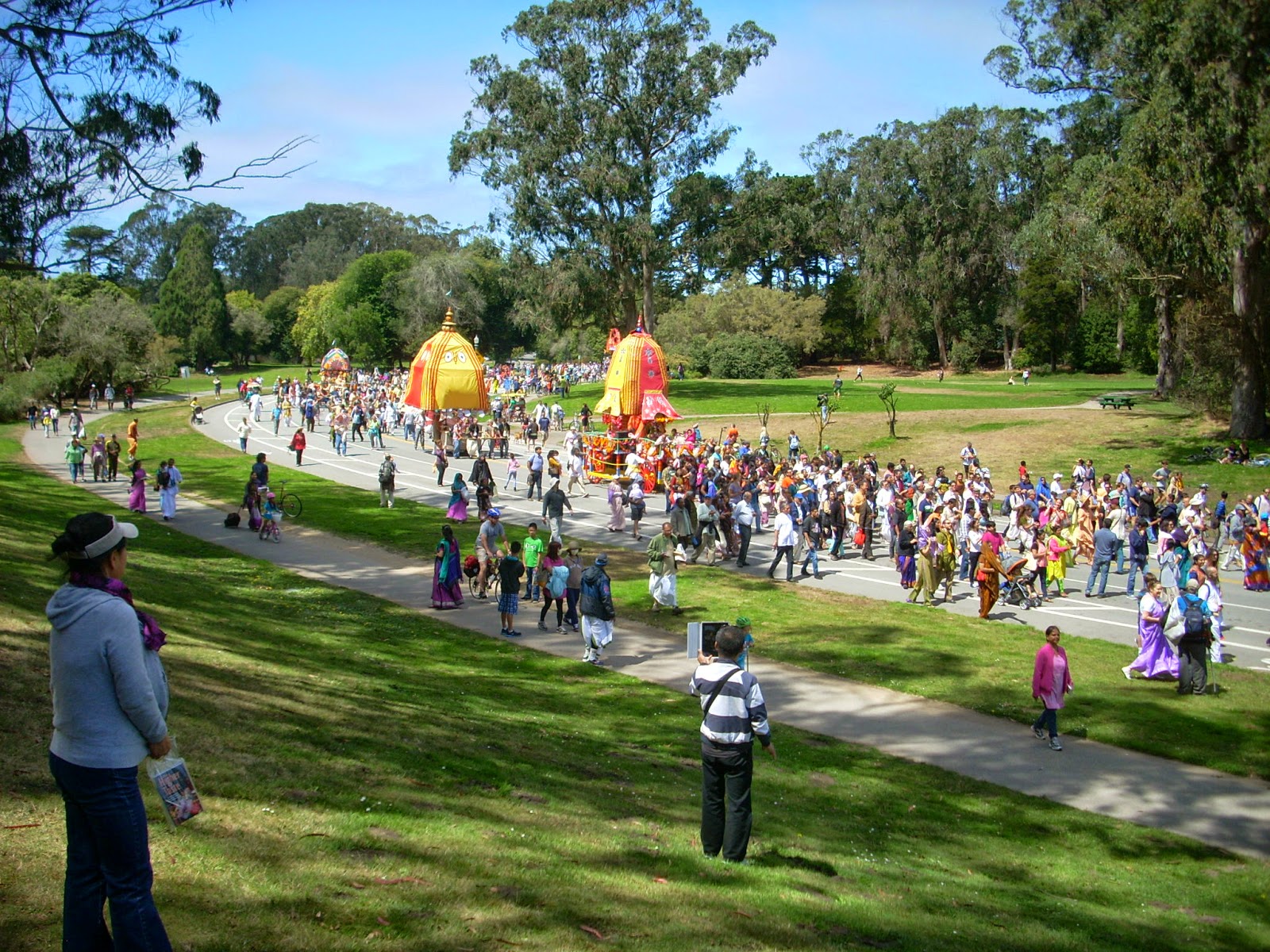 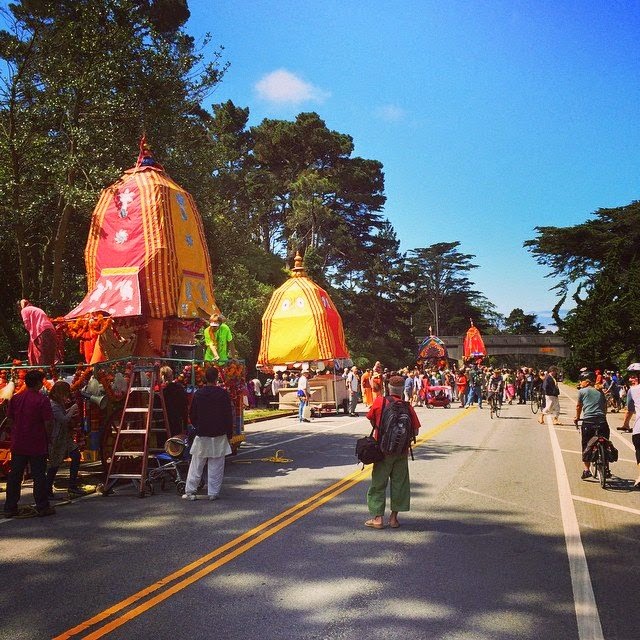 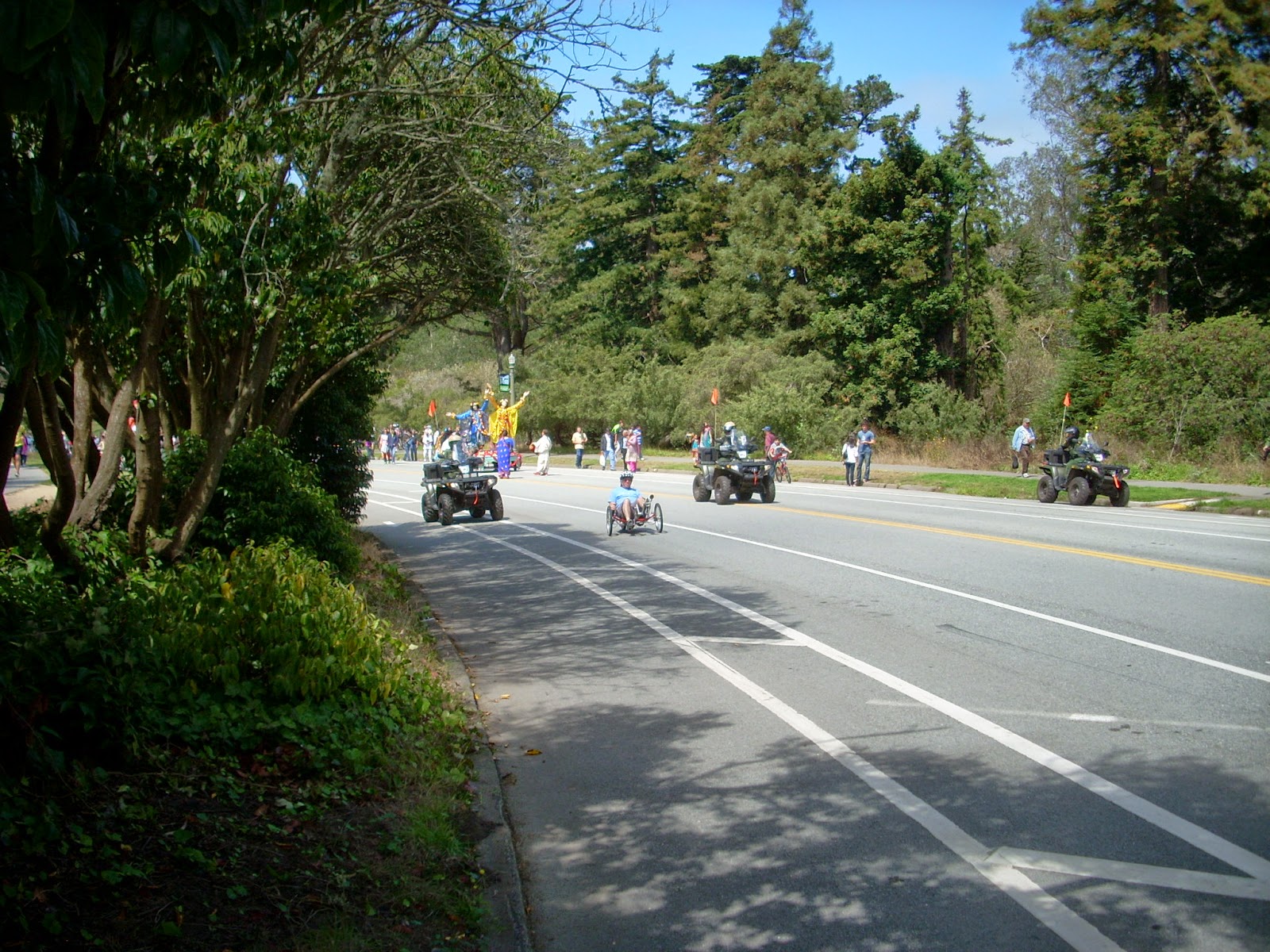 Park Ranger Security Forces Getting ready for the march 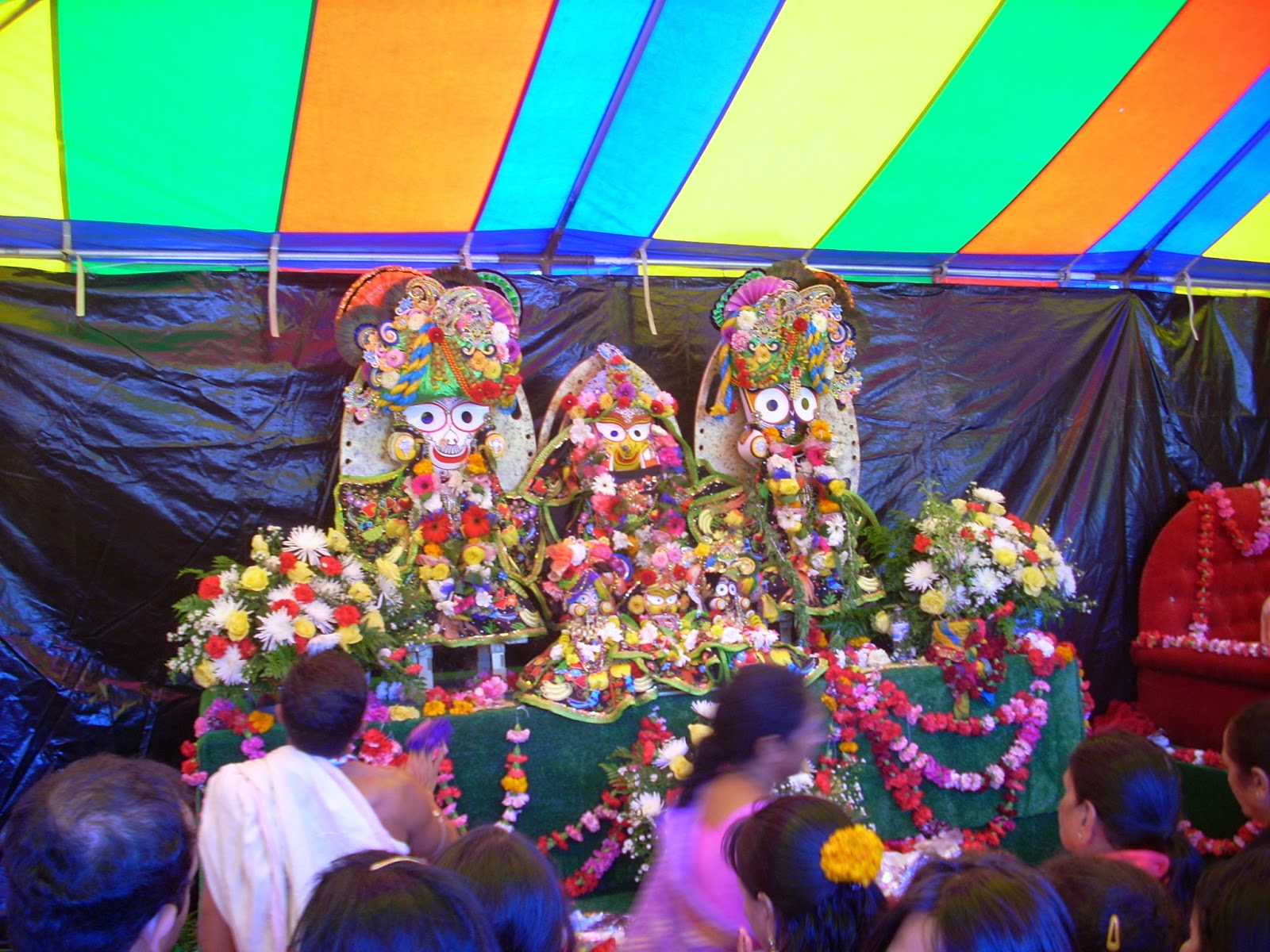