Interview for the Concordias university newspaper with Sundar Ram

by Purujit Das on Tuesday, August 30, 2011 at 3:17pm
we see you on the street doing books, playing hare krsna in subway. you're like everywhere(laughter) what's your story, purujit?

i was born in slovakia, turned on acid, realized that the school, job, family, die program totally sucks, read the bhagavad-gita as it is, moved to canada, started a film animation program here at concordia, dropped it and became a full time monk. since that time i've been working on what is called self-realization, which is in my humble opinion a way more exciting, blissful and free way how to spend your time in a human form.

really? so you studied here? at the mel hopenheim school of...
how does it matter? these things are just keeping us apart. i'm in this program, you are in that program. i have this class, you have that class. now there's gonna be this exam or that exam. everyone is very nicely fragmented and thus controlled. ultimately it's all bunch of nonsense, because after you come out of school, you realize that you don't know who you are, nor what is the complete whole. you see? they are not going to tell you about the whole context of things in which you're working, cuz then you can like(laughter) rebel. how many departments this university has?
i don't know, quite a few actually
yes, you have chemistry, film, music, art, computer so many, but in none of this you actually get to know about the whole. so people are trained to be servants. a servant does not need to know about how the whole factory works. he is needed only for his limited little department and as long as he does his job, he's fine. as soon as he starts to inquire about the whole thing, like wait what do the others do and what is the purpose of the factory? then he's dangerous. anyone interested in the complete whole is dangerous. so the great authorities of the original civilization of mankind like narada, devala, asita, vyasa have accepted that the complete whole is Krsna. so what i'm doing actually is that i'm trying to educate the students here outside of the voluntary slavery program about the complete whole krsna so they can wake up and free themselves from the brainwash. (laughter) just kidding.
is hare krsna a religion?
your body changes from a small boy, teenager, grown up man, old man. is this a belief or a fact?
a fact.
right. so although your body changes you remain the observer. you are watching this whole movie called "life" in front of you.

so is it religion or not?
wait..(laughter) let me finish. you're watching the bodily changes that means there's something constant. so that constant thing is actually pure you or consciousness and when that pure you or soul leaves the body. the body is useless right?

right.
so it is the consciousness which makes the body beautiful. it is the consciousness which is full of individuality, freedom, desires, opinions and so on. but in this materialstic society this most important subject matter of education is completely neglected. quite the opposite, we are constantly being brainwashed to identify with temporary bodily designations: i'm a man, i'm a woman, i'm black, i'm jew, christian, you name it. all these meaningless boxes and the whole society is based on this illusion. so this most essential hare krsna movement is an educational movement based on the authoritiy of the most ancient scriptures known to man, the vedas to educate people about the culture of consciousness. everyone is hooked up on some materialistic pleasure, you know, things which we don't really need, but still do them because they give us the false sense of being happy and the manufacturers of these things prosper, the economy is based on this: buy stuff you don't need. consciousness or soul is however full of unlimited pleasure, in other words it's all there inside, you don't have to go anywhere, buy anything if you simply connect yourself to your true self, which is eternal part and parcel of the reservoir of all pleasure.Krsna. one can have immediate experience of this if he simply chants the maha-mantra, which is an authorized sound vibration to realize the complete whole for this particular age: Hare Krishna Hare Krishna Krishna Krishna Hare Hare Hare Rama Hare Rama Rama Rama Hare Hare.just do it. so naturally we are one of the greatest threats for the materialstic society. that's why you hear of us as a cult, or weird people or so many other rubbish. the so-called leaders of this circus know very well that if people start practising this krsna consciousness, they won't be able to enslave them anymore becuz everyone is going to be deriving unlimited pleasure from within. just imagine a society of self-realized yogis! actually, i'm quite surprised you were able to smuggle this into the school newspaper(laughter), but you see that's krsna. krsna a.k.a God controls the whole thing and even if you try you cannot trick the greatest trickster. this is krsna consciousness.

i know you have a center here in montreal? maybe you could talk about that a little bit?
sure. i'm glad that you asked about this. it's not that we're just bunch of cultists locked up somewhere on an island, but we offer the montreal community an opportunity to taste this hare krsna culture first hand by visiting our programs. when you show up, it's basically chanting and dancing like a madman and going into a nice trance, then we teach the bhagavadgita and ask people to raise whatever doubts they have and finally we distribute an awesome vegetarian feast. it's all free and we want to expand this program. what is nice is that although krsna is the best thing in the world, no one is harrassing you and putting pressure on you to join the movement while you're there. our purpose is not to convert many people. we just want to put the information out there and those who have some brains will join us automatically. actually you're not joining anything. we are all parts and parcels of the complete whole eternally, so it's just a question of realizing it. it doesn't matter where you are. you can realizae it even now while reading this article. 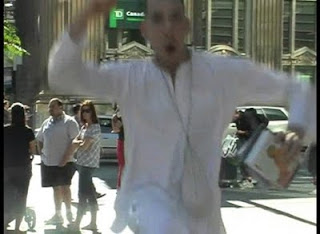 www.harekrishnamontreal.com
Posted by krishna1008 at 4:08 PM