Rupanuga Was "Right There" For the Guru Appointment?

V Dasa: His Grace, Rupanuga Das is an early (initiated in 1966) and dear disciple of Srila Prabhupada, herein presents an historic account of ISKCON before and after the physical departure of Srila Prabhupada. If you are a recent comer or a long term devotee, take time out to educate yourself on the progressive course of events that have shaped modern day ISKCON... RUPANUGA.COM

PADA: Rupanuga was one of the ISKCON "justices committee" folks that me and Sulochana were talking to on the phone when we opposed Kirtanananda. Rupanuga concluded that we were making offenses to a pure devotee, which lead to Sulochana being murdered. I also would have been murdered too, except the police arrested the hit man who was following me around in my car. Rupanuga still thinks he was right to declare these deviants as acharyas.

V Dasa: With due respect prabhu, your take on Rupanuga as equally culpable with those in the post of ISKCON justices for perpetrating injustices to the devotees is not accurate. I called Rupanuga on this and he told me that even though he was a member of the GBC at the time, unequivocally he did not take part nor did he condone their decisions. You cannot nor should you not lump him in the nefarious activities perpetrated by them. If you wish to understand who and where Rupanuga stands, please take time to read the following: http://www.rupanugadas.com/2013/12/controversy-theory.html

PADA: Sulochana was talking to Rupanuga on the phone, and I was right there at the phone with Sulochana overhearing their conversations? Rupanuga was more aware of the Sulochana issue than almost any other person at the time? He told us that we should not be attacking a great devotee like Kirtanananda with our writings. That is how he got us targeted for violence, he said we are wrong to address the deviations of Kirtanananda, especially in public writing? Yet, we had no other forum other than public protest? We would be beaten or killed if we protested in their camp?

Rupanuga created this controversy by saying Kirtanananda's deviations cannot be addressed in the way we were doing? He said our writings were offensive and so forth. That is what he supported at the time. He still says we are wrong to promote Srila Prabhupada as the guru and we still need to work with the GBC's guru system, the system which created all these crimes?

V Dasa: That needs to be corroborated, for Rupanuga's version of the facts are diametrically opposed to what you are stating. Moreover, isn't time to bury the hatchet regardless, isn't a Vaisnava para dukha dukhi, compassionate and forgiving? Is this what you want to be thinking about at the time of death? The nefarious activities of some of our God-brothers and sisters? And if they are culpable of unconscionable deeds, Krsna is the Supreme Referee, He's keeping score! All glories to Srila Prabhupada...

PADA: I am simply against re-writing history? Rupanuga said at the time that these 11 GBC people are gurus, which enabled and empowered these criminals. They are not, were not, could not have been gurus? For starters there is no appointment of gurus? That is the first controversy, who appointed the 11 as gurus? Apparently, people like Rupanuga appointed them as gurus because there is no evidence anyone else did?

That is the root of all the main controversy, Rupanuga said that these 11 are the appointed guru successors, while me and Sulochana said, there is no evidence to support that? We had the appointment tape -- and it appointed no gurus? If there is other evidence, where is it? This makes Srila Prabhupada look like he did not know who should be appointed as guru or not, its implicating him as unable to select actual gurus as successors.

V Dasa: Srila Prabhupada did appoint them. There is an abundance of documented information, taped conversations, letters, purports, etc., where Srila Prabhupada clearly instructs that he wants all his disciples to become guru. Of course those who assume that position must be duly qualified, viz., Vaco vegam manasah krodha vegam etc (Upadesamrta, text 1). Considering history, we know that those 11 who were initially appointed failed miserably with their disingenuous practices, but the instruction given by Srila Prabhupada stands...

B Dasa. And they didn’t all fall?

PADA: OK so a kindergarten teacher tells all of his students he wants them to become brain surgeons. That does not mean Rupanuga should give these children surgery drills, scalpels and skull saws and send them into a hospital brain surgery room to conduct the surgery? Srila Prabhupada said if a layman tries to perform brain surgery there will be chaos? Rupanuga has telescoped a general instruction with a specific instruction.

And when we forwarded those letters, we were being set up to get killed, thanks to Rupanuga saying that there is a specific order for Kirtanananda to be a diksha guru? There is no such order? And that is what we told Rupanuga at the time, but he sided with the GBC saying that Kirtanananda is a guru and we are making offenses?

And on the May tape Srila Prabhupada said, when they deviate, they will have to be replaced, self-evidently not acharyas, but fallible conditioned souls. He also told us a number of times we cannot allow people to touch our feet even, that is taking the post of diksha guru de facto, he said we would suffer from taking sins. And they are.

Yes, a kindergaten child can MAYBE take the post of brain surgeon eventually, when the training is complete, and when he gets the order that he is now qualified. They self-evidently did not get that order. That is what we told Rupanuga, we have the tape, there is no order, no one is named, and so forth.

He was informed by us about this. Rupanuga said he was "right there" and he heard some SPECIFIC order for the 11 to be gurus given. That makes no sense, why would Srila Prabhupada say NONE of you can absorb sins, and then say, 11 of you people can? And lets face it, they cannot? It looks to me like Rupanuga created tremendous amounts of suffering for others by encouraging them that they can absorb sins, when the acharya warned us not to do so, or face dire consequences? That makes Rupanuga a creator of immense suffering for his false gurus by having them take sins, never mind all the thousands of other victims of this process who were banned, beat, molested and shot?

V Dasa: I've said all I can to you, now I will go and chant the rest of my rounds. I hope you will do the same, Hare krsna...

Rupanuga was not "right there" when these people were authorized to be gurus, because they were never gurus, and thus never authorized to be gurus. in fact, Rupanuga's divine gurus are not even up to the standards of kanisthas, as is self evident even to the ordinary karmi world. Did I forget to mention that most of Srila Prabhupada's disciples here stopped chanting and they had to go out and get karmi jobs -- because Rupanuga's "gurus" kicked them out of their guru's house to make room for their debauchee's guru process? Rupanuga needs to quit saying he was "right there" when all this process was launched and authorized, it was never authorized by Srila Prabhupada, it was authorized by Rupanuga and his speculation -- that conditioned souls are acharyas -- creating an induced process of banning, beating, molesting and murders.

The issue was actually solved a long time ago? Srila Prabhupad said when conditioned souls take the post of diksha guru they will get sick, fall down, and as we see, they also die prematurely. Never mind they create endless scandals and criminal mayhem in the meantime. This has all been witnessed by millions of people as a lot of this has been in the public mass media, i.e. the GBC's gurus are world wide famous for all sorts of scandals, fall down, getting sick, dying prematurely and so on. Never mind police raids, lawsuits, crimes and etc. The evidence is in! No one can argue with direct physical evidence, never mind there are so many warnings in shastra about taking the post of diksha guru without authority? Even the mundane people know this is not an authorized guru process. This bogus process was authorized by Rupanuga and ilk. ys pd 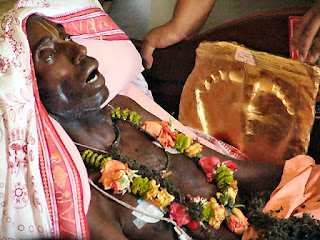 Conditioned souls should not try to absorb sins, it will make them suffer.