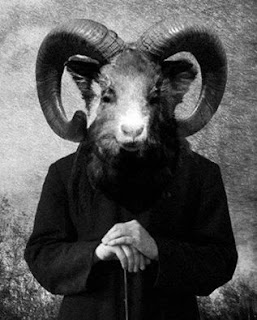 All Glories -- to Beelzebub?

[PADA: Srila Prabhupada says that when spiritual mis-leaders abuse, exploit and mis-represent religion, it can make the people in general reject religion. This has happened very widely in and around ISKCON, in fact in in 1988 Lokanath swami said ISKCON has become a ghost town (the residents left). Anyway, this person is another victim of the GBC's "guru mis-managers" and she makes a good summary of the situation.

Notice also that she says that people might leave ISKCON and run off to different institutions. And they are, folks are going to the Sridhara Maharaja, Narayan Maharaja programs, babajis and so on and so forth. Oddly, the ISKCON leaders are the same people who lead folks to these off shoots in the first place. In that sense, ISKCON is also spawning its own competition.

Its also interesting that she says misrepresenting religion can cause atheism, and apparently a number of young people in the Southern USA are getting tired of the hypocrisy of their "Bible belt" preachers and thus -- atheist clubs are on the rise there. Of course all of this process has all sorts of karma connections, and that is why Srila Prabhupada says the people who exploit religion and / or the post of acharya etc. are destined for the most obnoxious hells, because they lead others off the path to God.

She also says one result of these false programs is -- suicide. Recently Hrdayananda was with some ex-kulis from ISKCON, smiling like he did nothing too bad. Wait a minute? Hrdayananda's guru program caused a number of these ex-kulis to reject the religion, and some committed suicide?

Of course, the parents of many of these kulis are mainly to blame, they do not even know that Hrdayananda's program is the source of all these problems for their kids. And did we forget to mention, some of these ex-kulis are pretty much atheists, some of them eat hamburgers and so on, ok they rejected the religion wholesale due to the misrepresenting of the religion. It is amazing that some of their parents still think the GBC mis-leaders did not cause this catastrophic failure?

This is also a warning to even so-called Prabhupadanuga / ritvik programs, they too have to beware of developing exploiting mentality, which will still end up turning people off as well. The purpose of life it to connect with God, heaven help those who take others off that path, especially when that deviation is institutionalized. The good news is, the best way to turn this around is to expose it, and more and more people are doing that, like this person is. ys pd]

S Dasi: A few days ago, a young lady asked me about my deity. It turns out she was interested in spiritual life and practices. I love my dear Giri Govardhana and Deities, but I do not affiliate myself with any institution. I was open and honest to her, explained my position very clearly, did not hide anything, being unbiased I believe the truth is always the best response.

She thanked me for being the first direct and honest person she has met regarding my personal experience in the [ISKCON] movement. She met many 'preachers' but was always put off by their approach, 'they try too hard, when something sounds too good to be true, it generally is' she said.

We spoke for hours, about similarities in different religious beliefs and practices. How beautiful all religions are, how they were equally powerful and how each offer their followers spiritual perfection, liberation and love of God.

The practices set out in each belief system, the books, rituals and ceremonies, are all perfect. People on the other hand do not always join or manage an institution / movement / society or congregation with innocent intent, purity or good conscience. Leaders fall prey to greed by cleverly manipulating the system, power over others and admiration of their followers fuels this even further.

Unfortunately, innocent seekers get burnt in this mixing pot of corruption and end up leaving, or are forced out as a result. These souls are generally forgotten, they are still servitors of the Lord, but there's no follow up or after care for their abrupt readjustment to life outside. They are on their own, many don't make it, some choosing suicide, some rejoin other practices, others actively preach against the movement speaking out, while sadly many cannot reconnect or find solace and end up becoming atheists.

The ripple effect of our actions and words should not be glazed over, thinking we will automatically be forgiven because we prayed for atonement or performed penance or ritual sacrifice (Vedic or other). Our words and actions carry weight and will have a lasting effect and reaction.

It has been many years since I left the 'institution' and began practicing on my own, on my terms and my way. It has been the most blissful and spiritually euphoric years of my life so far. I wouldn't change anything, Giri Govardhana has been very kind and I am most fortunate to have His beautiful darshan daily. Everywhere I go, people fall in love with Him, ask about Him and eat His remnants.

Thank you reading and I hope you all having a blissful day. Love thy neighbors and please help the homeless, we are all the Lord's servitors after all, the Lord is not biased so let us help and be kind to each other.
Posted by krishna1008 at 8:37 AM