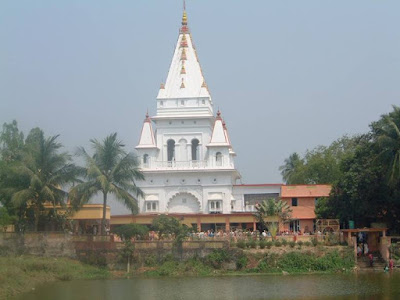 namah - obeisances; maha-vadanyaya - who is most munificent and charitably disposed; krsn?a-prema - love of Krishna; pradaya - who can give; te - unto You; krsnaya - the original Personality of Godhead; krsna-caitanya-namne  - under the name Krishna Caitanya; gaura-tvise - whose complexion is the golden complexion of Srimati Radharani; namah - obeisances.

”O most munificent incarnation! You are Krishna Himself appearing as Sri Krishna Caitanya Mahaprabhu. You have assumed the golden colour of Srimati Radharani, and You are widely distributing pure love of Krishna. We offer our respectful obeisances unto You.

SCENARIO BEFORE THE APPEARANCE OF LORD CAITANYA

According to His desire, His eternal associates appeared before Him, taking birth as humans. Ananta Sesa, Siva, Brahma, the sages, and other associates of the Lord all took birth as highly elevated, pure Vaishnavas. Lord Caitanya, Krishna, knew everyone’s position and identity. Most of them took birth in Navadvipa, yet some were born in Orissa, and others in the west. All these associates appeared in different places, but everyone met in Navadvipa-Mayapur. The village Ekachakra is in the Radhadesa district of Bengal. The Supreme Lord Nityananda made His appearance there. Lord Nityananda is an ocean of mercy, the shelter of all Vaishnavas and the giver of devotion.

By goddess Sarasvati’s grace, residents of Navadvipa of all different ages were learned exponents of the scriptures. The people were proud of their material knowledge. Residents mostly wasted their time spending money for sense pleasures and other worldly affairs. As they grew prouder and more materialistic, people’s tastes for devotional service to the Supreme Lord Sri Krishna decreased alarmingly, and in the beginning of Kali-yuga they exhibited the qualities of the future. They squandered large sums on the marriages of their sons and daughters, and in this way they wasted their human life.

Even the so-called learned high priests did not know the purpose of the scriptures. Nobody was engaged in explaining the imports of congregational chanting of Lord Krishna’s holy name- “the religion of Kali-yuga” - they spent their time simply finding faults in others. As for the superstitious so-called renunciates and hermits, not a single name of God ever escaped their mouths. Those considered most pious in society were heard repeating the Lord’s name Govinda only once at the time of daily ablution. Devotional perspectives were invariably absent in explaining transcendental literatures like Bhagavad-Gita and Srimad Bhagavatam. 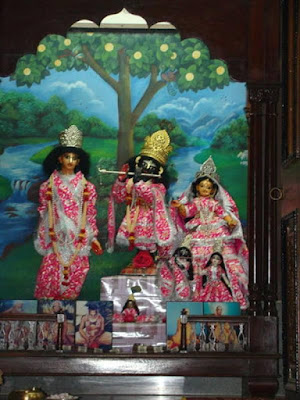 The devotees of the Lord became distressed seeing the mass of people engrossed in material existence under the external energy of the Lord. How can all these living entities be liberated? They are completely mesmerized by the myth of sense pleasures. Although people were requested to chant Krishna’s holy name, they refused and instead they foolishly busied themselves acquiring fruitless material knowledge.

The elevated Vaishnavas continued their devotional activities by worshiping Lord Sri Krishna, and discussing Krishna conscious topics. They became moved to benedict humanity and prayed that Lord Krishna would quickly shower His mercy upon them.

Foremost of the great Vaishnavas in Navadvipa was Sri Advaita Acarya. He was a preeminent spiritual preceptor and exponent on knowledge of the absolute science of devotion and renunciation. His delineation of Krishna conscious topics equalled Lord Siva’s. On all existing scriptures His explanations arrived at the same conclusion-the essence of everything is devotion to Lord Krishna’s lotus feet.

Advaita Acarya constantly worshiped Lord Krishna with great devotion, offering Him tulasi blossoms and Ganges water. His intense attachment for Lord Krishna made him resound in loud exaltation, and the sound penetrated the coverings of the material world. In that manner Advaita Acarya spent His days in Navadvipa, where He suffered acute pain at the sight of persons bereft of devotional service. He had a very compassionate nature, He was always thinking of how to liberate the conditioned souls.

“If My Lord descends, He can liberate everyone. I can boast of being an incarnation of Lord Maha-Visnu only if I can convince the Lord of Vaikuntha, Krishna, to appear in this world. And when that Lord of Vaikuntha descends in person, I shall sing and dance in joy and liberate all the conditional souls.” Considering matters in this way, He constantly worshiped the lotus feet of Krishna with undeviating resolve.

Each one of the magnanimous devotees executed his spiritual duties and knew nothing besides devotional service to Krishna. They were unaware of their own spiritual identities (svarupa), yet they mixed intimately as confidential friends. Wherever they looked they saw a world devoid of devotion, and their hearts were burning with sorrow. They found no one with any taste for the nectar of Lord Krishna’s pastimes, so they simply glorified the Lord amongst themselves. The devotees would gather together for several hours in Sri Advaita Acarya’s residence discussing topics of Lord Krishna, and in this manner they dispelled their grief. The devotees saw the world burning in the flames of material existence, and there was no place to discuss topics of Krishna consciousness. This caused them great sorrow. 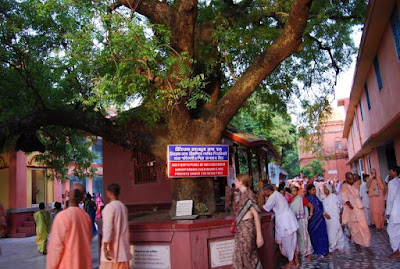 Sri Advaita Acarya and the other Vaishnavas tried to make the people God conscious, but not a soul appreciated them.

Stricken with grief due to people’s suffering, Sri Advaita Acarya began fasting, and the Vaishnavas sighed deeply at the situation. “Why sing and dance for Krishna? What is the meaning of congregational chanting of the Lord’s holy name? Who are the Vaishnavas?” Gross materialistic people running after wealth and family do not comprehend any of these things. Indeed such atheists only taunt and laugh at the Vaishnavas.

As evening descended, Srivasa Thakura and His three brothers would loudly sing the Lord’s name in their house. The atheistic neighbours vilified Srivasa Thakura, pronouncing him mad. They declared that the entire village would be destroyed because of him. The tyrannical Muslim rulers would tear the village apart if they heard people loudly chanting God’s name. Some envious neighbours said they would break down Srivasa Thakura’s house and float it down the river in order to get rid of him.

Someone said, “Only when Srivasa Thakura leaves will the village be peaceful again. Otherwise the Muslim rulers will torture us.”

When the saintly Vaishnavas heard such threats from the atheists they simply wept and revealed their sorrow to Lord Krishna. Sri Advaita Acarya burned with rage on hearing this news, and, unconcerned with His undressed state, He addressed the Vaishnavas in these words, “Listen Srivasa, Gangadasa, and Suklambara. I shall make Lord Krishna appear before everyone’s eyes. Lord Krishna will come personally and liberate everyone. He will take you with Him, and we will all teach the atheists love of Godhead. And if I fail to keep My promise, I shall manifest My four-handed form and take up the disc. I shall sever the heads of all the atheists. Then will it be accepted that Lord Krishna is My Lord and master and I am His proper servitor.”

Sri Advaita Acarya continually spoke in this way, and He worshiped the lotus feet of Lord Krishna with a solemn vow. All the devotees also worshiped Lord Krishna’s lotus feet with great attention and continuous tears.

Sri Jagannatha Misra, the transcendental personality, resided in Navadvipa, and like Vasudeva, Lord Krishna’s father, He was always engaged in spiritual activities. He was magnanimous and possessed the best of all brahminical qualities. His dedicated wife, Srimati Sachidevi, was the embodiment of devotion to the Supreme Lord. She was the universal mother. All her eight daughters passed away, and she was left with one greatly fortunate son, Visvarupa. Sri Visvarupa was as beautiful and charming as Cupid and the source of joy for His parents. From birth Sri Visvarupa was renounced, and in His childhood He mastered the different scriptures. 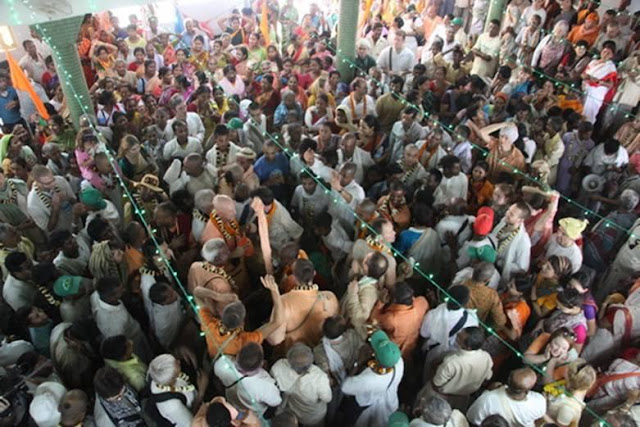 
[PADA: We believe that the movement of Lord Chaitanya, i.e. chanting the holy names of God, will continue on with or without an official institution. Or there may be a number of institutions and sanghas that are not fully unified. It would be nice if the devotees could unite and promote the process together, but the chanting of the Lord's name will go on regardless of the material external situations.

The good news is, more and more people want to chant the holy names under the banner of worship of the primary acharya who brought the process out most recently, and that is Srila Prabhupada. Anyway its encouraging to see so many people chanting the names of the Lord, because this will help them get purified more and more, and onto the right path eventually in time, as we see factually happening gradually. We get a lot of readers from ISKCON's circles and no doubt people are thinking about, and probably talking to their friends about, all these issues more and more.

As Srila Prabhupada says, the little comets may come past the earth and make a big flash in the sky for a short period of time, but the full moon eventually re-emerges as the main source of light. ys pd]