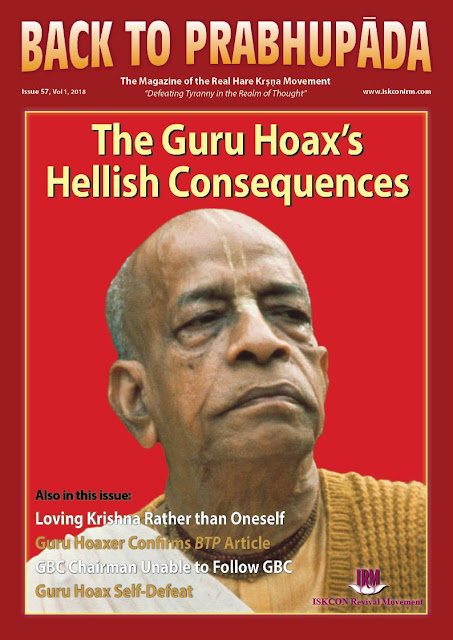 [PADA: We still cannot figure out why the IRM mainly uses printed and mailed copes of its magazine and not digital editions. It makes it harder to reach a larger audience. Some devotees might get it mailed to them, some might not, its simply not easy to find a copy for a lot of folks.

Anyway, the good news is that Krishna Kanta Desai and the IRM are finally catching up to speed with PADA's strategy. In 1997, Yaduraja, Krishna Kanta, Adridharana, Kamsa Hanta et al. all told me that PADA was "too heavy handed with its language and tactics, and it has out-lived its usefulness. We need to make a new strategy, and we will do that by sitting down and forming a cooperative association with the GBC's gurus like Jayapataka and Hrdayananda, and convince them to be ritviks etc." Really?

As such, PADA's editor needs to completely stop: the book changes lawsuit, the child abuse issue, and most importantly -- drop the poison issue. And PADA's editor needs to retire in the Caribbean and sit on the beach while these IRM folks "negotiate a new beginning with the GBC." That is also what the IRM folks argued about the book changes lawsuit at the time; it is not needed, the IRM is going to "negotiate a deal" with the GBC's gurus to have the originals printed.

OK, and we said at the time, this is sentimental dreaming in color, none of these compromising proposals will amount to any substantial changes. Worse, our prediction that people like Adridharana would end up in big legal troubles in India came true, he had to go into hiding when the GBC foisted apparently false charges on him.

FAST FORWARD to the present time of 2018 and voila!, the IRM is now saying what we at PADA have said all along, the GBC's guru hoax is producing hellish consequences, and it has been all along. And nowadays, the biggest argument is: which of these hellish consequences is more hellish than the other? This is the main question being asked nowadays.

We have the banning, beating, assaulting, molesting, suing and murders of various Vaishnava devotees issue.

We have the "alienated most of the second generation" issue.

We have the lawsuits, including one that bankrupted the society.

We have the bad publicity issue.

We have the changed books issue.

And did we forget the poison complaint of Srila Prabhupada issue?

And yes, we have the empty temples issue with not enough manpower.

And lest we forget, the whole GBC idea since 1978 is, Krishna's successor gurus and acharyas are often falling down deviants, if not perhaps debauchees, drunkards, sexual predators and criminals. All of these and more are the results of the hellish guru hoax.

Someone showed me the "Mayapura Guru Services" paper, teaching the proper guru tattva and the parampara system to the newer people. Yep, how did you guess, the guru parampara from God is full of nasty things like -- flies, bugs, mice, rats, cock roaches, deviants, sexual predators, sewage spills, garbage, dope heads, drunkards, .... who knew? So this is one of the perhaps most hellish results, they are attacking the guru parampara full time, all the time, 24/7.

PADA: Yes thanks prabhu, I checked out your link where Mukunda UK has become a sort of resident "contributing writer / consultant" on some pro-Nazi sites. Yes I see, he is saying Hitler is a righteous warrior, ... and so was Jesus when he whipped the money changers? Yes, he is clearly working with these people who say the UK immigrants (Hindus?) are terrible. Umm, yep we need to rid ourselves of the people who worship Krishna around here!

Worse! Mukunda's is the superior race? Because his race kills and eats animals, makes giant factories, and aborts their babies? Where is any of this taught in the Vedas? I pointed this out a long time ago, Mukunda is advertising mundane speakers using photos of Srila Prabhupada and Krishna and so on.

Right, but I do blame in part people like Sanat / Prahlad / Gavin Swinden and others who encouraged Mukunda's melt down when they said we were wrong to challenge his Illuminati / Zionist / advertising mundane speakers program. They defended his process and attacked us. So when we said, maybe lets pour some cold water on this hot mess, these thinkers said -- no, lets pour some hot explosive petrol on this mess. Yep, and look at the results!

These folks clearly wanted this Illumi-nutty thing to grow and grow and grow into a much bigger crisis. And it did. As one ex-kuli said, these guys are just like the GBC, experts at making a huge mess, not so expert at cleaning it up. Anyway! While meditating on WW II, don't forget, we become what we meditate on and worship, and go there in our next life!

Right. Good question. Torben says its easy for anyone to find a living diksha guru, and in fact any of Srila Prabhupada's original disciples can be one. Why has he and his pal Kim Moller not taken initiation from anyone of them in decades then, and they never tell us what their initiation name is or even if they found such a living guru?

Yes, there are tons of diksha gurus out there, its easy to find one, but they themselves cannot find one since 1978? What is the hold up? It looks like they are going to die waiting to find their living guru, meanwhile at least the ritviks know who their guru is? Basically, Torben is saying that the ritviks should do what he is doing, not have any guru at all.

GGM folks are still promoting his mayavada idea that we do not originate with Krishna. 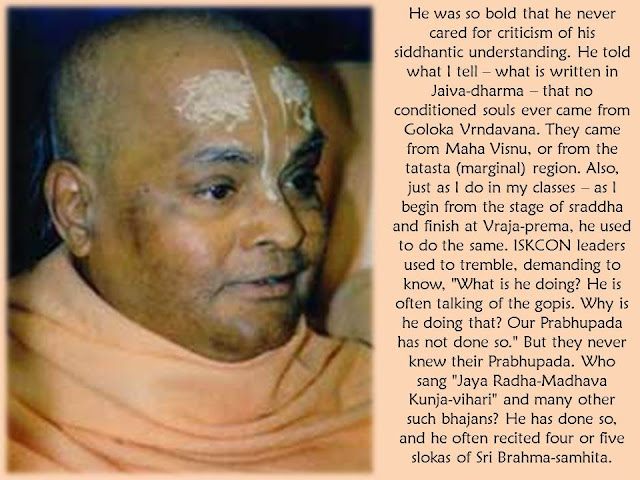 Hearing about material things is the root cause of material existence:

SB 10.7.1-2 King Parīkṣit said: My lord, Śukadeva Gosvāmī, all the various activities exhibited by the incarnations of the Supreme Personality of Godhead are certainly pleasing to the ear and to the mind. Simply by one’s hearing of these activities, the dirty things in one’s mind immediately vanish. Generally we are reluctant to hear about the activities of the Lord, but Kṛṣṇa’s childhood activities are so attractive that they are automatically pleasing to the mind and ear.

Thus one’s attachment for hearing about material things, which is the root cause of material existence, vanishes, and one gradually develops devotional service to the Supreme Lord, attachment for Him, and friendship with devotees who give us the contribution of Kṛṣṇa consciousness. If you think it fit, kindly speak about those activities of the Lord.

PURPORT-As stated in the Prema-vivarta:kṛṣṇa-bahirmukha haiyā bhoga-vāñchā karenikaṭa-stha māyā tāre jāpaṭiyā dhare Our material existence is māyā, or illusion, in which we desire different varieties of material enjoyment and therefore change to different varieties of bodies (bhrāmayan sarva-bhūtāni yantrārūḍhāni māyayā [Bg. 18.61]). Asann api kleśada āsa dehaḥ: [SB 5.5.4] as long as we have these temporary bodies, they give us many varieties of tribulation—ādhyātmika, ādhibhautika and ādhidaivika. This is the root cause of all suffering, but this root cause of suffering can be removed by revival of our Kṛṣṇa consciousness.

All the Vedic literatures presented by Vyāsadeva and other great sages are therefore intended to revive our Kṛṣṇa consciousness, which begins to revive with śravaṇa-kīrtanam. Śṛṇvatāṁ sva-kathāḥ kṛṣṇaḥ (Bhāg. 1.2.17). Śrīmad-Bhāgavatam and other Vedic literatures exist simply to give us a chance to hear about Kṛṣṇa. Kṛṣṇa has different avatāras, or incarnations, all of which are wonderful and which arouse one’s inquisitiveness, but generally such avatāras as Matsya, Kūrma and Varāha are not as attractive as Kṛṣṇa. First of all, however, we have no attraction for hearing about Kṛṣṇa, and this is the root cause of our suffering.


But Parīkṣit Mahārāja specifically mentions that the wonderful activities of baby Kṛṣṇa, which amazed mother Yaśodā and the other inhabitants of Vraja, are especially attractive. From the very beginning of His childhood, Kṛṣṇa killed Pūtanā, Tṛṇāvarta and Śakaṭāsura and showed the entire universe within His mouth. Thus the pastimes of Kṛṣṇa, one after another, kept mother Yaśodā and all the inhabitants of Vraja in great astonishment. The process to revive one’s Kṛṣṇa consciousness is ādau śraddhā tataḥ sādhu-saṅgaḥ (Bhakti-rasāmṛta-sindhu 1.4.15).

The pastimes of Kṛṣṇa can be properly received from devotees. If one has developed a little bit of Kṛṣṇa consciousness by hearing from Vaiṣṇavas about the activities of Kṛṣṇa, one becomes attached to Vaiṣṇavas who are interested only in Kṛṣṇa consciousness. Therefore Parīkṣit Mahārāja recommends that one hear about Kṛṣṇa’s childhood activities, which are more attractive than the activities of other incarnations, such as Matsya, Kūrma and Varāha. Wanting to hear more and more from Śukadeva Gosvāmī, Mahārāja Parīkṣit requested him to continue describing Kṛṣṇa’s childhood activities, which are especially easy to hear and which create more and more inquisitiveness.