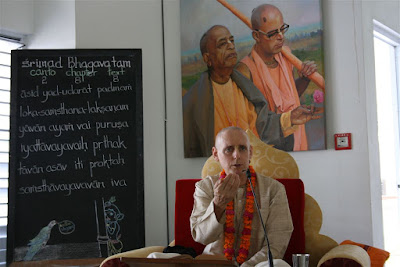 Sankarsan dasa (seated) and his main mentor Tamal Krishna swami
(in picture on the wall).

Before departing this world in 1977, Srila Prabhupada instructed Sriman Sankarshan Das Adhikari and his other disciples to take up his mission of propagating the ultimate science of Bhakti throughout the whole world for the benefit of all suffering humanity.

[PADA: Isn't Sankarsan one of the persons Tamal had helping his "Tamal Krishna tape library" -- which hi-jacked Srila Prabhupada's audio tapes in 1978? And many of these tapes appear to have suddenly and mysteriously "went missing" from the 1977 era? And we still do NOT have some of those tapes, or any explanation why so many dates have no audio? For sure, I did not get a copy of the November 1977 tapes until -- 1997. These tapes were clearly hidden. No one else had a copy either, and I was the first person to publicly publish them.

Where were these tapes?

And Gauridasa Pandit says, there were tapes made on those "missing" dates -- but they no longer exist? And worse, the existing tapes were hidden from the general devotee population for decades. Only an elite few people had access for decades? A friend of PADA says he has repeatedly asked Sankarsan to explain all this, to no avail.

And why does Sankarsan agree that editing of the books is a good idea?

And why did the GBC's / Sankarsan's program declare that they are the exclusive "appointed / voted in" gurus of ISKCON, and subsequently ban, remove and kick out the thousands of other disciples? If "all" of the disciples are supposed to propagate the process, why are over 90 percent of the original disciples not participating in the official society?

Why did Lokanath swami say in 1988 that the temples have become empty ghost towns? And Lokanath swami also asked, where have all the devotees gone? In other words, who authorized the GBC / Sankarsan program to remove all of these people, and make ISKCON into a ghost town? And isn't the purpose of emptying out the temples to make -- a bogus / illicit sex guru program?

And did we forget to mention that Sankarsan's mentor -- Tamal -- has been blamed for establishing a child abuse regime, for which Tamal was sued for $400,000,000 in Dallas (and Tamal lost). Aren't a lot of these people who supported Tamal ALSO responsible for the regime's results, such as the Dallas lawsuit? Why would we support the advocates and cheer leaders of this program? Of course for that matter Bhakti Vikas swami is another current darling of the ISKCON program, but he too has been a big supporter of the GBC's guru regime, and he is a sannyasa disciple of Jayapataka swami.

Yep! Tamal is ALSO the main suspect in the poison complaint of Srila Prabhupada. What kind of mentor is that? And why are the Ajit Krishna, Torben Nielsen, Kim Moller team and other similar folks promoting this regime and its agenda, and its members like Sankarsan, at all? Kim Moller was recently promoting Sankarsan das as a guru, why do these people think he is a guru? Because he was voted into their illicit sex guru's regime?

Tamal was one of the founder fathers of the illicit sex acharya's process, and Sankarsana was allegedly one of his Texas bucket boys, and now -- we have to worship this program and its leaders? Again, Sankarsan is bona fide because he has been with the Tamal program, and he was "voted in as guru" by the sex with taxi driver's acharya's program? Why are people promoting such a guru lineage?]

In obedience to Srila Prabhupada, Sankarshan Das Adhikari has fully taken up the banner of pure devotional service to the Supreme Godhead, and made it his life's mission to spread the Krishna consciousness science as far and wide as possible throughout the world. In the year 2000, in reconfirmation of his spiritual master’s order, he received the blessings of ISKCON’s Governing Body Commission (GBC) to make disciples all over the world.


[PADA: Right, I almost forgot, the GBC's illicit sex guru program "voted in" Sankarsan as one of their co-gurus in the year 2000, the same year the Windle Turley child abuse lawsuit was hitting the GBC hard, and almost everyone was appalled at how badly the GBC had been handling the children's issue. Was this a good time to "get certified" as guru, by the same people being charged with orchestrating child abuse on a large scale?

Why would Ajit Krishna, Torben Nielsen, Kim Moller team and others endorse or promote such a guru lineage, or any of its members? And if Sankarsan has been encouraging these GBC leaders to be posing as gurus and so on, is he not co-responsible for the ensuing problems? 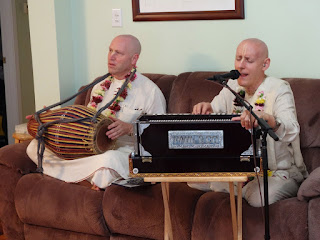 Sankarsan and his book changing messiahs

Yep! Everything is being changed by these folks, from the new "young ladies in the front" choreographed procession samkirtana, and lets not forget the books, all are being changed as well. I think that Vaisesika (pictured above on left) has replaced Jayadvaita as a BBT trustee. He and his pals are always telling us people about the need to alter and edit the books.

Sankarsana is another guy who advocates for changing the books and he always associates with these book changers, but notice that recently these folks are ganging up on our original books program by halting the original books from being taken from the printers in India. We really need to make sure people understand the original process, whether it is samkirtana, the books, and so on and so forth. As Srila Prabhupada says, change means rascal.

Oddly, its again the Ajit Krishna, Torben Nielsen, Kim Moller program that endorses and / or promotes such a guru lineage? They are making pretend they are in favor of original books, but support the group that is changing these books, and calling them gurus. Meanwhile they attack the ritviks, because the ritviks want original books? 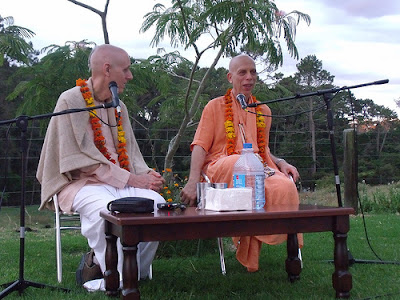 Yep. Prahladananda is another promoter of the GBC's guru program. He is one of the people who says acharyas are in need of voting in, voting out, suspending, censure, monitoring and so on. This is also what Rocana's constitution is saying. Again, what kind of acharyas need such regulative over sight by a committee? 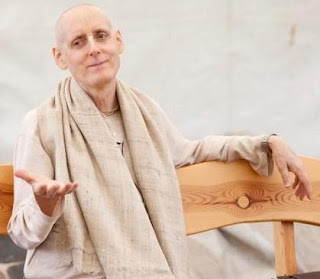 I am another Jesus / diksha guru

And lest we forget, Sankarsan is another person who is encouraging the other GBC gurus to claim they can absorb sins, when clearly, they cannot. And neither can he, so he is cheating people that he is taking their sins as their diksha guru, but he cannot resolve their sins.


Sankarsan in sum promotes himself as a sort of "reformer" of the ISKCON church, but he just recycles their problems around in a circle, and we end up with more conditioned souls gurus? And we have had similar problems with "reformer" people like Sanat / Mukunda / Prahlad (Paul Coats) / HKC Jaipur etc. They claim they have a "new fix" for the problems of ISKCON, and their fix is, as they sent me links to repeatedly -- everyone has to listen to Bhakta das, a giant cheer leader of the Gaudiya Matha's gurus, the GBC's gurus, and folks like Radhanath and / or the burying of Kirtanananda in a samadhi project.

OK wait a minute, that means these guys are still rooted in promoting the same Gaudiya Matha's and GBC's illicit sex gurus program which means the same agenda of: molester pooja, book changes, burying deviants in the holy dham etc. -- which caused all this mess in the first place. Where is their reform? Its just recycling the same mess around and around, just like Sankarsan is doing. One devotee said these guys are simply re-packaging the same old stinky manure into another package and calling it "the newly reformed package." Nope, same old same old.

And then again Prahlad says to PADA that linking photos of Krishna and Prabhupada to Mukunda's Illuminati-ism / anti-Zionism / pro-Hitler-anuga-ism deviation program is "great preaching because its getting lots of hits." OK, but Srila Prabhupada said, we are not supposed to promote these things? Sorry, the reform has to actually be rooted in getting back to what Srila Prabhupada actually said and intended.

Sankarsan: I propose that as Srila Prabhupada did not name any female initiating gurus we also should not do so.

[PADA: Where does he name any diksha gurus?]

However our women can all be potent, powerful siksha gurus. I cite the example of my wife, Her Grace Srimati Vishnupriya devi dasi, who is addressed as Gurumata by my disciples. She is certainly a bona fide spiritual master, although she is not initiating. She leaves that service to me and assists me in my service as an initiating spiritual master. She is just as much of a spiritual master as me, and in some ways she is more than me, definitely my better half.


[PADA: If the other GBC are gurus, why does Sankarsan have to tell them that they are wrong to consider making women into gurus?]

Thus in one fell swoop, GGS declared Srila Prabhupada’s entire tape ministry as useless (not to speak of his own and those of his fellow GBC gurus!). However, we see from the statements from two ISKCON GBC voted-in gurus below that GGS’s philosophy has been completely rejected:

“There is more that comes out from this tape machine than just plastic tapes (shakes a tape). What really comes out of that tape recorder on these tapes is divya-jnana, or transcendental knowledge.”

“Vani, the vibrational presence is the instructions we receive from the spiritual master [...] It can be on an audio or video recording. Or it can be written in a letter, book, or article. No matter in which way the instruction is given and received, it is fully active and potent.”

“You should have a fire sacrifice and the second initiates should hear through the right ear the mantra on my recorded tape.”

Sankarsan is agreeing with us, the vani is the main thing. That is a good start. Anyway, he is a supporter of the idea that conditioned souls can act like Jesus and absorb sins, and all he is doing is causing these fools to fall down, get sick and die early. And worse, the sins are not being absorbed and resolved, they are sticking onto these conditioned souls and will drag them to hell in their next life. And their disciples will have to suffer, because the sins have not been properly resolved either. Anyway, here is the result of Sankarsan and his pals saying conditioned souls can absorb sins like Jesus: ys pd 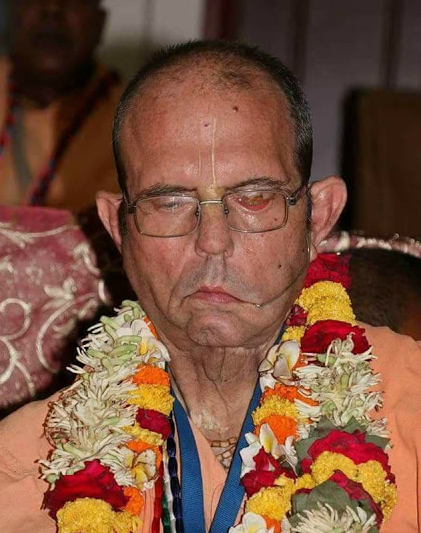