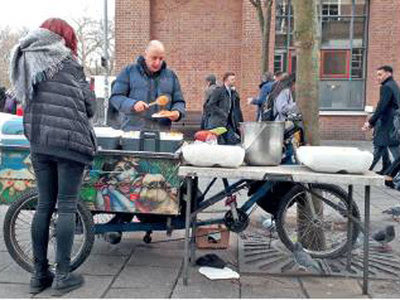 Akshaya Patra’s first kitchen in London serves 2,000 vegetarian meals to poor students and the homeless. At Kentish Town in northwest London, around 40 poor men queue up for a paper plate of steaming vegetable stew and rice. “It’s a life-saver in this freezing cold,” explains Andrew Moran, 53, one of the group.

“A lot of people would starve otherwise.”

No one is aware an Indian charity is funding their meal.

For the past two years, Akshaya Patra Foundation UK / Europe focus has been on fundraising to help pay for 1.6 million midday meals for schoolchildren in India. But the Indian charity has now turned its attention to the poor in Britain.
It has opened its first kitchen in London and started serving 2,000 nutritious vegetarian meals per day for free to students and the homeless.

Next, it will expand to schoolchildren, the elderly and hospital patients. Half a million children go to school hungry in the UK, 70,000 of whom live in London.
A 2,000-sq ft. makeshift kitchen has been carved out of the basement of a building in Holborn where members of the UK charity "Food for All" make vegetable stew, pasta, and superfood porridge.

Akshaya Patra has teamed up with the charity to cook and distribute the food in vans and by rickshaws to three feeding points in London for homeless people, and to SOAS (School of Oriental and African Studies) and LSE (London School of Economics) for poor students.

“Food for All had the manufacturing licences and experience. We will scale it up and make it more organised,” says CEO Bhawani Singh Shekhawat. The philosophy is the same as that used to create mid-day meals but recipes are suited to the local palate. “We don’t offer sambar but it is still ayurvedic, protein-balanced food with no additives and we don’t re-heat,” he adds.
Last summer, as a pilot the charity offered meals to 100 schoolchildren at a holiday club at Newham Catholic College.

In the UK three million children go hungry during the holidays. “There are families of six living on a food budget of £80 a month who cannot afford to feed their children. Many working parents send their children to these holiday clubs with a bag of crisps. The last meal they had was at 6pm the night before. It is the responsibility of the state but there is a lack of funding,” says Shekhawat.

At the kitchen, Parasuram Das, who founded Food For All and is the head of manufacturing at the Akshaya Patra UK project, is delighted. He had emailed Goldman Sachs the day before, introducing himself as a new bank next door to theirs — except his was a “food bank.” “The next morning they were down here seeing how they could help,” he says. As we speak someone from a building company working on the construction of Goldman Sachs’ new London offices arrives and offers to pay for all the paper plates worth £250 a week and a £35 sack of dal a day.

Das goes around supermarkets each evening collecting wonky vegetables, short-dated products and supermarket surplus which he uses to make dishes. He also receives donations from wholesalers who supply Indian supermarkets in the UK.

[PADA: It has been reported to PADA that Parasuram and his Food For Life workers have been banned from Bhaktivedanta Manor. Of course, if someone like Sivarama swami, Bhakti Chaitanya Swami or Janananda Maharaja et al. want to come there and preach the bogus GBC's standard idea, that Lord Krishna's guru parampara successors are often deviants, sexual predators, drunkards, drug addicts, criminals implicated in murders, people who eat chicken salads and so on, the residents of Bhaktivedanta Manor all fall down and kiss their feet there.

Then Bhakti Chaitanya swami lectures that he and the other leaders are not experiencing the ecstasy of Lord Chaitanya, well no kidding, because you are preaching that the guru successors to Lord Chaitanya are drunkards, sexual predators and debauchees. You folks are attacking Lord Chaitanya since 1978.

In other words, apparently at least, only those leaders who preach that God's guru successors are often fallen and debauchees are most welcomed in ISKCON there. Or what? Parasuram prabhu should also link up with the London Prabhupadanugas who are doing Saturday harinama there, these people need to join together and form a support group and make an independent process there. ys pd]
Posted by krishna1008 at 6:10 AM